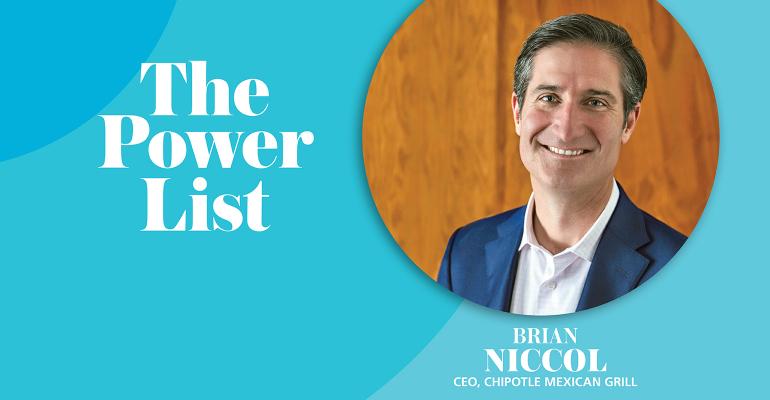 Brian Niccol had a mighty task when he became chief executive of Chipotle Mexican Grill in 2018. The brand’s record on food safety was tarnished, and its visibility was poor among the next-generation of on-demand consumers. He set out to hire a team that would right the ship by changing marketing tactics and expanding the fast-casual chain’s digital footprint. That’s led to soaring digital sales over the past two years fueled, in part, by the company’s industry-leading app and loyalty program, which now boasts about 17 million members.

Restaurant design innovation has also made Chipotle a leader. In 2020, the company introduced its first-ever store geared for digital-only orders. The company is also accelerating its rollout of Chipotlanes, drive-thru lanes designed for quick pickup of mobile orders prepared at digital second-make lines inside each restaurant. The company has nearly 130 Chipotlanes and more are in the works as they’ve proven to be among the chain’s most profitable transactions.

“The economics are phenomenal. It's minimal additional costs for meaningful incremental volume that is our best margin transaction,” Niccol said during a December 2020 investor conference.

Niccol has rolled out several initiatives to attract employees at all levels of the company. During his tenure, the chain added a cash bonus program for eligible hourly employees and tested unlimited paid time off for senior level employees. Let’s not forget, he made a bold move to relocate Chipotle from Denver to Newport Beach, Calif., in part, to attract top executive talent.

The former Taco Bell leader couldn’t have planned it better, as the changes he implemented two years ago have proven invaluable amid the coronavirus pandemic, where off-premise operations have proven vital to survive.

In its most recent quarter, the chain’s recovery was evident. It reported an 8.3% increase in same-store sales. That compares to a 9.8% decline in the second quarter, a period when most restaurants remained closed for dine-in orders.