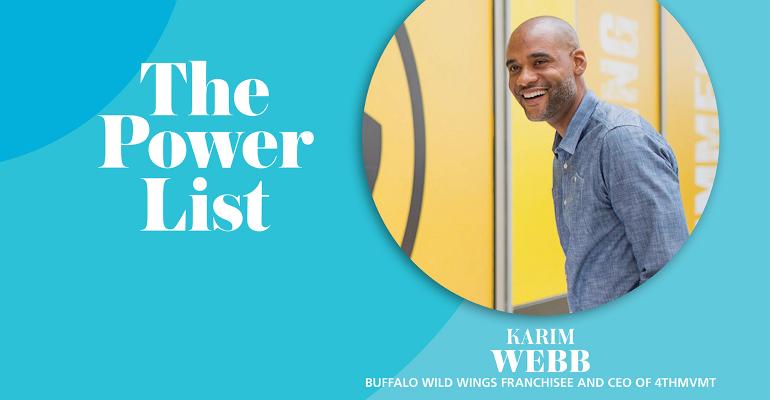 Karim Webb has long been an advocate for a more equitable restaurant industry, and he has stepped up his activity over the course of the pandemic and the social justice movement that was reignited in 2020.

As the co-owner and operating partner of PCF Restaurant Management in Los Angeles, he operates four Buffalo Wild Wings locations in the predominantly minority communities of Torrance, Carson, Baldwin Hills and Koreatown.

His restaurants generally outperform the chain’s system as a whole, which Webb attributes to his engagement with the communities where he operates, and to the fact that the people working in those restaurants resemble the people they serve.

Webb is also the CEO of 4thMVMT, which invests in entrepreneurs largely from communities of color who are overcoming trauma and lack access to capital.

The organization provides leadership training as well as support in the areas of supply chain, technology and back-office solutions, according to its web site.

“Entrepreneurship is the most effective vehicle for Black and Latino people to exist equitably in America,” the site says. “By removing barriers, we can close the nation’s wealth, health, and achievement gaps, changing society for the better.”

Webb also has joined with the Multicultural Foodservice & Hospitality Alliance and PepsiCo to launch Pathways to Black Franchise Ownership, a leadership and mentorship program aimed directly at increasing the number of Black restaurant operators.

“Ultimately, ownership is a conduit to the outcomes that we want,” Webb said in a panel discussion on the initiative during the virtual conference Restaurant Rise Powered by MUFSO. “We want people that exist equitably in our country. We want people to get great health outcomes. We want kids to go to competitive schools. We want people to build wealth.”