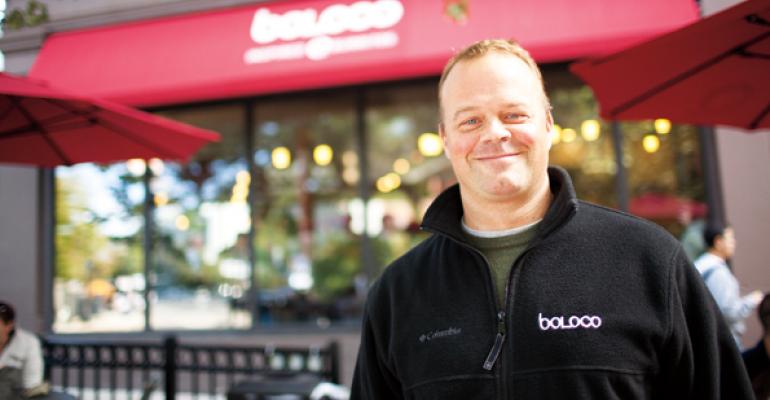 John Pepper, former chief executive and co-founder of the fast-casual Boloco burrito chain, stepped down in October in a move that he called “walking the proverbial plank” after an investment deal went sour.

In a memo to company team members, Pepper said the Boston-based company had approved a $15 million deal from an unnamed investor that would have allowed for planned new growth in the Washington, D.C., area and New England, and the building of infrastructure. Just days before it was scheduled to close, however, the deal fell apart in a dispute over control of the company.

Pepper said he put his job as CEO on the line in a last-ditch effort to push the deal through, issuing an ultimatum to the board.

“I walked the proverbial plank and sadly never got to get back on our boat,” Pepper wrote in the memo. “In short, our current owners accepted my resignation and rejected the deal.”

In an email interview with Nation’s Restaurant News on Monday, Pepper said the deal was with a New York-based investment firm that has been a supporter and fan of Boloco for at least five years and has “deep experience with a variety of restaurant chains.”

Boloco’s board also includes Nick Marsh, chief executive of Chop’t Creative Salad Company and an investor in other concepts; Kevin Reddy, chief executive of Noodles & Company; and Pepper’s father John E. Pepper Jr., chairman of the Walt Disney Corporation and former CEO and chair of Procter & Gamble, according to the company fact sheet.

Pepper, who holds more than 10 percent of the company, primarily in common stock, said his last day was Oct. 7. His emotional memo went on to praise the “incredibly talented, generous and good-hearted people” of Boloco and the 22-unit chain’s promising future.

The chain expects to reach $27 million in annual sales in 2014. In the interview, Pepper said the company planned to reach 60 company-owned units by 2018. The company had also discussed franchising, he said, but that step was not imminent.

He pledged his support from the “sidelines” as an owner and “very likely as a board member and perhaps even the chairman for a period of time,” he wrote in the memo, a role he may prefer given the lack of  “day-to-day bullets that a CEO has to endure which become somewhat distracting and discouraging.”

Patrick Renna, the chain’s chief financial officer, has taken on the role of interim CEO while the company looks for a successor.

Renna said Pepper “will be missed from the company’s day-to-day leadership team,” but that he will continue to support the team and the board on significant strategic decisions “as a friend and a major shareholder.”

“John is admittedly one of Boloco’s biggest cheerleaders — and probably our No. 1 customer of the buffalo steak burrito,” said Renna.

In searching for a new CEO or equivalent, “key attributes of a new leader will be a best-in-class operations background coupled with a passion for Boloco’s unique brand, purpose and aspirations,” said Renna. “The mission of Boloco that John championed remains central to all of our decisions: to positively impact the lives and futures of its people through bold and inspired food and practices.”

Pepper was one of the original founders of the brand that began in 1997 as The Wrap, a burrito and wrap sandwich concept. Wraps later fell out of fashion and the company rebranded — with essentially the same menu — as a “globally inspired” and “appealingly off-center” burrito concept called Boloco, now known for its innovative ingredients and varying sizes.

The company also strives to be a forerunner in human resources practices, and Pepper has long argued for higher pay within the industry and providing health care and other benefits.

Pepper said he hasn’t decided what his next step will be, but is enjoying time with his family, including a four-month-old baby.

“Whatever it is, it will need to be something meaningful and important and fun,” he said, “which usually means it will include trying to impact the lives of others through a product or service that customers/users get very passionate about. Burritos did that well. I’m sure there are other ways.”

​Correction: November 26, 2013 An earlier version of this story incorrectly listed the title of  board member John E. Pepper Jr. He was chairman of the Walt Disney Corporation and former chief executive and chairman of Procter & Gamble.