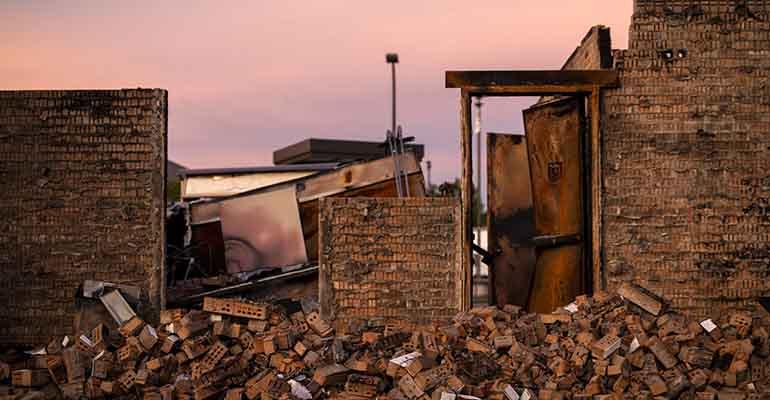 Stephen Maturen / Stringer / Getty Images News
Over 1500 buildings were damaged during the unrest that followed the killing of George Floyd by members of the Minneapolis Police Department on May 25 including Gandhi Mahal and Wendy's (pictured).
News>People

Ruhel Islam, owner of Gandhi Mahal in Minneapolis, went viral after speaking out in support of protests after his restaurant burned down; now he is back temporarily as a takeout-only spot

When Minneapolis restaurant owner Ruhel Islam first heard the news in late May that his restaurant Gandhi Mahal had burned down, his first inclination was to show his support of the protests, rather than focus on his own loss. In a Facebook post that has since gone viral, Islam famously said, “Let my building burn, justice needs to be served.”

This rallying cry from a restaurant owner whose livelihood was first challenged by the pandemic and then destroyed in a fire in the middle of the Black Lives Matter protests caught the attention of sympathizers worldwide. As donations have poured in over the course of the summer, Islam and his community are starting to rebuild. While he says the rubble might take three or four years to be demolished, cleared, and to subsequently rebuild, in the meantime he is opening a takeout and delivery-only spot next month, Curry in a Hurry, in a building owned by one of his regular customers.

“I did not know my original comments would go viral; I was just staying strong for my community,” Islam said “The main issue is injustice has been happening for a long time. Right away, I think we need deeper change.  That’s why I said to let my building burn. I don’t condone violence, but protest is a part of the democratic process.”

Related: How restaurants can embrace diversity and inclusion in the wake of the Black Lives Matter resurgence

Islam was born and raised in Bangladesh, and as a young person, took part in the 1990 mass uprisings in his country as protestors demanded a democratic system. After a year of protests, he said, his country got a democratically elected leader and the country’s first female Prime Minister. Because of his background, Islam felt a kinship with the protestors across the country demanding social justice and sweeping change.

“I don’t blame the protestors,” he said. “Look at the bigger picture. It’s a good cause. That was my focus.”

As an immigrant, Islam followed his dream to own a restaurant in the United States. Gandhi Mahal, which opened 12 years ago, served casual Bangladeshi and Indian cuisine for dine-in and takeout, like curries, vindaloo, biryanis and kebabs. But the most important part of his business, Islam said, was his involvement with and dedication to his community, the surrounding Longfellow neighborhood.

Gandhi Mahal restaurant, with a “minority owned” banner on it, appears to have only broken glass. pic.twitter.com/Ky5TJ6R5uj

After his restaurant, and the entire building which housed several businesses, burned down, Islam and his neighbors created Longfellow Rising, a community fundraising organization to help rebuild their building and repair other damage caused in the surrounding neighborhood during the protests. But the organization is still looking for funding. In addition to the Go Fund Me campaigns that have popped up in support of Islam’s story, Islam is applying for a grant from the One Minneapolis Foundation. This year the philanthropic organization is specifically focused on Minneapolis businesses owned by people of color to help them rebuild after the pandemic and period of civil unrest in the city through the OneMPLS grant round.

They are also hiring a consultant to begin the process of organization, planning and construction, and while the process may take several years, Islam said it will be worth it to help create a new sustainable building that can benefit the entire community:

“We are planning a long-term goal and to come back even stronger,” Islam said, adding that businesses like a community theater are already interested in being a part of the upcoming project. “The building that burned down was built in 1920, so when we build this next building it will survive for the next 200 years. We want a sustainable design with LEDs, solar panels and more. We’re able to start from a blank canvas now.”

Until these “pie in the sky” goals become more of a concrete reality, Islam is focused on keeping his own business afloat in the interim. With Curry in a Hurry opening up next month as takeout and delivery-only concept, he will be able to begin serving customers and sustain his business until his dream restaurant is recreated because “four years is a long way to go.”

“We will rise like a phoenix from the ashes and lead by example in our community,” Islam said. “Now the world is watching us.”