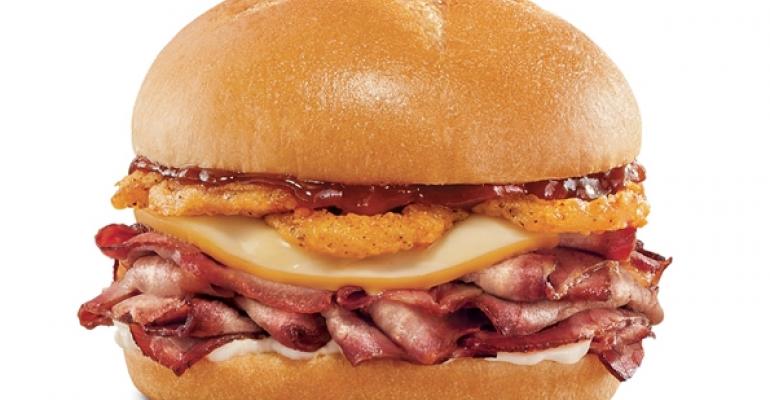 Arby’s has deemed its Smokehouse Brisket sandwich its most successful new product in company history.

The limited-time offer lifted year-over-year same-store sales more than 12 percent during the promotion, according to a company spokesman.

The sandwich, introduced in October and available as late as January in some cases, consists of smoked USDA Choice and USDA Select brisket, smoked Gouda cheese, barbecue sauce and crispy onions. During the month-long promotion period it was part of approximately one in every five transactions at the 3,354-unit quick-service chain chain, the spokesman said.

Given the sandwich’s success, the company will reprise the sandwich later this year, the spokesman said, although an exact date is not yet planned.

How did you develop the sandwich?

Len Van Popering: We initiated development by trying to understand the flavors and taste experiences that would resonate most with our guests. What we uncovered was that delivering layers of smoky flavor was something that was very appealing to our guests.

We landed on a 13-hour hickory smoked brisket with smoked Gouda, barbecue sauce and crispy onions. It has been really the perfect marriage of flavors to deliver a delicious, cravable, smoky sandwich.

How did you do your research?

Van Popering: We established consumer guidance panels — literally thousands of guests who have said they want to be part of the menu development process. So we engage in a two-way conversation with them on a regular basis.

The idea and experience around food is as important as the actual ingredient that we’re serving. So rather than offering a sandwich or snack or side options, we want to know what motivates them to come in, to come back, and what resonates with them.

We looked at different options for big ideas that we could bring to market, and the notion of “smokehouse” topped the list.

We also interpreted macro trends: We spend significant time looking at [traditional quick service] competitors and non-traditional ones such as the grocery channel and fast-casual and more fine-dining establishments. … We’re regularly monitoring what happens at barbecue competitions across the country. That way we can anticipate what will resonate over the course of time.

Neville Craw:  We weren’t looking for the one perfect sandwich, but for pieces of what’s coming down the pike that we can take and think about how that would work as an Arby’s component.

Van Popering: For this sandwich we combined a number of nontraditional QSR ingredients [brisket, smoked gouda and a bakery style specialty roll]. While our guests enjoy many special ingredients, [this sandwich] was really kind of blazing a trail in many respects, and the response has been very positive.

Craw: Guests [on our panels] gave us the leeway to choose the highest quality of brisket and a non-traditional cheese. Layers of smoky flavor were important to them.

How did they express that “leeway”?

Craw: We looked at a plethora of brisket. Some were of lower price point or were smoked for fewer hours or had a different type of smoke delivery. At the end of that process, the one that we preferred really rose to the top [in terms of guest preference]. The natural smoke was the way to go, and the cut of brisket and the amount of marbling that we preferred was the way to go. Something leaner wasn’t chosen. It happened to be what we considered to be the premium brisket out in the marketplace.

Van Popering: Some concepts’ guests are looking for the most amount of food for the least amount of money. What we are so thankful for and excited by is when our guests recognize quality and are willing to pay a higher price for it.

Can you tell me more about the product development process?

Craw: We started with, How do we deliver on layers of smoky flavor? We realized that we couldn’t do it just with roast beef and a sauce.

Brisket was the winner in terms of the most flavorful and pronounced starting layer of smoke. Also, consumers knew of it.

Then each additional component [Gouda and barbecue sauce] was for finding balance while still delivering layers [of smoky flavor].

Gouda has been out there, and we saw it in different markets. It was already on our radar this past year.

Van Popering: We made a conscious decision to reclaim our leadership credentials in terms of bringing new flavors to guests. Our partnership [earlier in the year] with King’s Hawaiian [for a roast beef sandwich using the Portuguese-style sweet bread] was an example of that, and it was so well received.

We also introduced a [Chocolate] Molten Lava Cake [in January of 2013], which blazed a new trail in terms of delivery of indulgence in QSR.