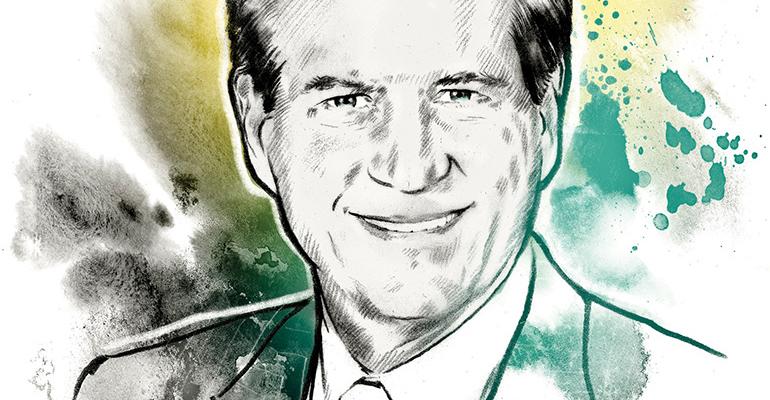 John Miller, president and CEO of Denny’s Corp. , has been working in the restaurant industry for 40 years, or as he describes it, he’s “been around a while.”

The foodservice veteran is this year’s recipient of the Norman Award. The Nation’s Restaurant News award is named for the late industry pioneer Norman Brinker, who founded Brinker International Inc., and honors a restaurant executive who consistently mentors and inspires future leaders.

Miller has done a lot of things in his career, including rolling out several successful initiatives at Denny’s, but if you ask him what he likes best about his job, it’s not what you might think.

“Trust me, I love competing in the marketplace, I love the team at Denny’s, I love where we sit in family-dining, I appreciate the opportunity that has been afforded to me, but of all of those things, the greatest blessing of all is being able to see people develop and blossom and grow,” he said.

He likes to build what he calls “generational wealth” with younger colleagues “by giving them something they couldn’t have had without the experience of a prior generation. I love that,” he said.

Under Miller’s leadership Denny’s has seen revitalization — with menu item improvements, a new remodeling plan, enhanced customer service and a commitment to a more diverse workplace. This year the chain received a MenuMasters award from NRN for its revamped buttermilk pancake recipe. The Spartanburg, S.C.-based operator has more than 1,700 locations around the world, and combined systemwide sales of $2.8 billion, according to the company. During a challenging year for full-service chains, Denny’s reported a domestic systemwide same-store sales increase of 0.9 percent in 2016, and opened 50 restaurants and completed 240 remodels.

This year the chain launched around-the-clock delivery for those customers who want the family-dining experience without leaving their couches, helping the legacy chain evolve to meet modern customer concerns. “John has a unique ability to take an incredible wealth of industry knowledge, and couple it with what is truly an outstanding mind and an equally if not even stronger heart, to set a vision for an organization that naturally inspires others to follow him and therefore become even stronger and empowered leaders themselves,” Dillon said by email.

Dillon added, “His leadership is evident across the corporate team, with our franchise partners and extends to our vendor partners and through to our charitable community partners.”

“The Norman Award is a great tribute to John. He clearly has the leadership qualities that Norman Brinker demonstrated throughout his life,” said Jon Luther, former CEO of Dunkin Brands and former president of Popeyes.

“These leadership tenets inspire his team, and have brought Denny’s to great heights.”

The proof is in the pudding, as they say.  Metrics show that Denny’s has been on the right path with its corporate philosophy. Team member turnover has decreased over the years. The management turnover rate, for example, has improved steadily, and is now in the high teens/low 20 percent range, said Miller.

“Embrace openness” is one such guiding principle.

“We believe that a company is best when it’s very very diverse and we respect each others differences. We can bring something different and unique to the party,” said Miller. Earlier this year, Denny’s CEO, John Miller (left) and the Denny’s team gave $1 million to No Kid Hungry to end childhood hunger in the U.S. The donation was Denny’s largest contribution in the company’s six-year partnership with No Kid Hungry.

“So it’s very open, extraordinarily diverse and we’re very committed from bus room to board room to having great diversity of background. And we think it just creates a much more dynamic, a much more powerful, a much more united and capable workforce.”

To show the importance of the guiding principles, Denny’s leadership team makes sure to talk about them at leadership committee meetings, store leadership meetings and board meetings.

“If you want values to matter, you have to talk about them all the time.”

And it’s okay to not be perfect.

“That doesn’t mean every day we fully live up to those principles. We’re humans. We have our challenges.” But Denny’s values, outlined for all to see on its website, are intended to be the touchstones to come back to.

Other principles include pride in the Denny’s heritage (and willingness to share knowledge); a hunger to win in the marketplace (and not rest on the brand’s laurels); and belief in what the chain calls “the power of we.”

During Miller’s time at Brinker International, he had the opportunity to work with the award’s namesake, Norman Brinker, who was known for his mentorship and leadership.

“Norman had this extraordinary ability to make you feel like you could bend steel — or walk through walls or something and that’s the way it felt working for him, you just couldn’t wait to go to work. Can I do what he did? No. But I try to.”