/sites/all/themes/penton_subtheme_nrn/images/logos/footer.png
Recent
Recent
The Wealthy Franchisee: A critical mistake to avoid when hiring
May 17, 2022
French desserts take on East Asian flavors such as ube, guava and champorado
May 17, 2022
Clean Juice names Tripp Setliff as new chief operating officer
May 17, 2022
5 new restaurants to try in Chicago
May 16, 2022
KFC U.S. president Kevin Hochman departs Yum Brands
May 16, 2022
Featured
Meet 4 emerging NYC concepts
May 16, 2022
Menu Tracker: New items from Starbucks, Subway and Panera
May 12, 2022
Memphis Seoul brings Korean BBQ and Southern cooking to Brooklyn
May 11, 2022
Executives on the move: 13 restaurant leaders with new positions in April
May 03, 2022
MUFSO
brought to you by 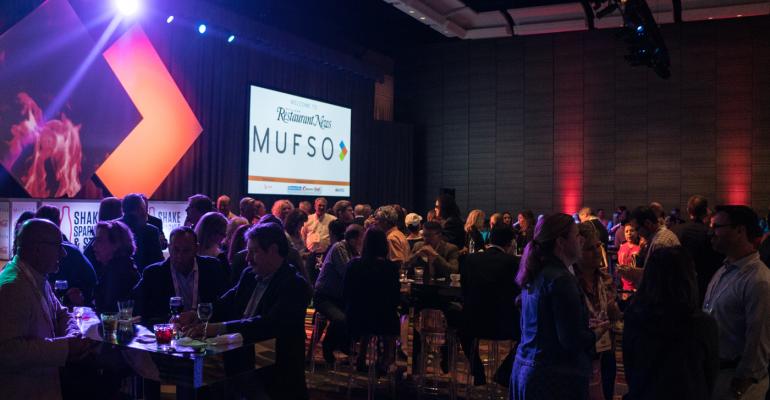 All photos by Heather Abbott
News>People

This is part of Nation’s Restaurant News' special coverage of the 2017 MUFSO conference, taking place Oct. 1-3 at the Hyatt Regency at Reunion Tower in Dallas. Follow coverage of the event on NRN.com and tweet with us using #MUFSO. Stay connected on the go by downloading the MUFSO app.

This year’s Hot Concepts winners may be a diverse group in terms of cuisine and style, but they all agree on one thing: delivery is a crucial avenue to explore in order for their businesses to continue growing.

That’s the theme that emerged in a panel discussion that featured all five winning emerging growth chains, moderated by NRN’s Lisa Jennings at the MUFSO conference in Dallas on Monday.

“If you’re not in on this delivery thing, you’re going to miss out,” said John Sola, CEO of Grill Concepts, which operates Public School on Tap, a nine-unit, full-service, craft beer-focused concept with a retro-school theme.  Delivery, he said, is “something you have to pay attention to right now.” The panelists all agreed that the consumers’ newfound love affair with Netflix combined with the ease of ordering amazing food from the comfort of their couch with a few swipes on their phones poses a challenge for restaurant operators.

Delivery from restaurants has indeed become increasingly popular, with a 7 percent rise in the past year, or 1.7 billion delivery-related visits to restaurants, according to data from the NPD Group.

Reasons customers choose delivery mostly has to do with convenience. The NPD Group found that 50 percent of consumers who use delivery do so simply because they didn’t want to leave home for whatever reason. Another 38 percent said it’s easier than cooking, and the rest choose delivery for the speed factor and to avoid bad weather.

Restaurateurs, however, are increasingly cognizant that consumers don’t necessarily realize the food is not being delivered directly by the restaurant when third parties, such as Olo, to name one, are involved. While restaurants frequently work with third parties for staffing and liability reasons, the concern that the food may not travel well, which may reflect poorly on the restaurant and not the delivery service, is a real one.

“If the food is messed up, they’re going to blame the restaurant, not the third party,” Sola warned. “We’re being strategic about who our partners are because sometimes we hear that the food didn’t travel well,” Ingram said. “We’re looking at breathable packaging. The reason we went with pretzel buns is that they will hold up, even sitting in our restaurants.”

Andrew Shin, vice president of marketing at Bibibop, a build-your-own Korean bowl concept with 25 units that recently took over Chipotle’s now-defunct Shophouse stores, said that it’s important to do the research on third-party delivery services.

“We vet our third-party vendors,” he said, noting that Bibibop has started catering in Ohio, where the concept is based, but has ambitions to expand to a national scale.

Looking for another option that falls in between delivery and sit-down in terms of mobile convenience, Sola said Public School is also looking at online ordering, where customers can pay in advance and then pick up their orders.

Flower Child has several third parties that deliver for them.

“It’s a very important part of our business,” said Sam Fox, founder of the seven-unit fast-casual, healthful concept. “It’s going to be important to the future of our business. We’re trying to figure out the metrics and the cost of it.” But the cost equation used by third-party vendors does raise financial red flags for some restaurateurs.

“The costs they’re trying to pass on to the restaurants are becoming prohibitive, having the restaurateur pick up a 20-percent fee,” Fox said. “But the third-party vendor needs that money to survive.”

The relationship could be symbiotic or it could be contentious—something that remains to be seen.

“It’ll be interesting to see how it’ll play out in the next few years,” Fox said. “There are going to be winners and losers.”

The Hot Concepts Reception is sponsored by Rock & Brews

The MUFSO app sponsor is Steritech

The Lanyard & Welcome package is sponsored by Hospitality Mints

The official music sponsor is Rockbot