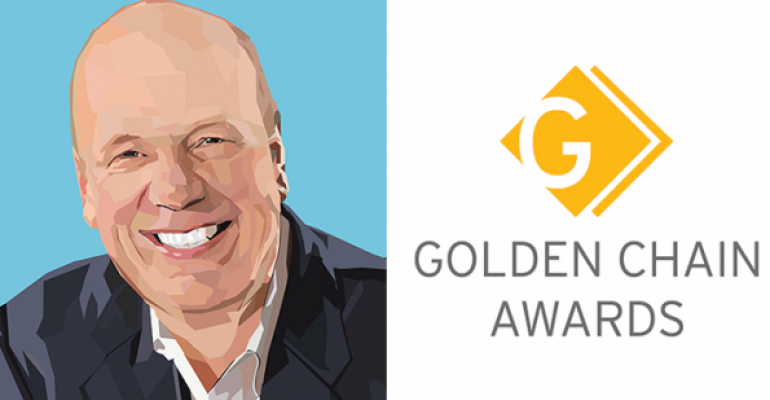 To celebrate the Golden Chain honorees, NRN dives into the strategies they use to build brands and inspire people. Find out more about the 2016 winners &gt;&gt;

​Darden Restaurants Inc. CEO Gene Lee is a former busboy who rose to become chief executive of the largest casual-dining operator in the country, with 1,586 units across seven brands.

Lee took the helm at Darden in February 2015, at a particularly difficult time for the Orlando, Fla.-based company: Its board of directors was unseated in a proxy vote led by an activist shareholder. Since then, Lee set out to be sure Darden’s chains outperform the casual-dining segment. The comeback was led by the flagship Olive Garden brand, whose same-store sales rose 3.1 percent last year.

John Miller: You’ve been in the restaurant business for quite some time now. How did you get your start?

Gene Lee: I started back as a busboy for a company called York Steakhouse when I was 16 years old. I needed a job. I wanted to put gas in my car. I never thought that this is where I was going to end up, but I never left the industry after that moment. I’ve actually only switched jobs once. York Steakhouse was acquired by Darden’s predecessor, General Mills Restaurant Group, in, I believe, 1980, but I’ve only not been associated with Darden for eight years of my career, and I only really left the job once in my career.

JM: That’s amazing and that is a testament to longevity and loyalty … The industry has challenges today with labor ... easy access to cash, and pricing power challenges. How do you see casual dinin adapting to these challenges and others?

JM: Speaking of that leadership and leaders leading, what do you think it means to be a leader?

GL: You know, I like to break it down into this real simple saying that I think I try to live every day: I think leaders have to define reality and provide hope, and I think that it’s really about letting people know where we stand in the competitive environment in which we compete in. Then the leader has to have a compelling vision of what needs to be done in order to compete effectively, and you need as a leader to be able to communicate that effectively, and I believe in my heart that that vision has to be simple. Sometimes as leaders we make that message way too complex and too complicated. …

Then, as a leader, I really believe it’s about putting together great teams and empowering them to get things done. Especially when you look at an organization the size of Darden, one person cannot have a whole lot of impact. It is about having great teams and making sure that those teams have strong relationships. …One of my core beliefs is when you take talent and you multiply it with strong relationships, productivity increases.

Putting experience to the test

JM: You had the chance to put much of that to the test recently. When you stepped into Darden, it was perhaps not the smoothest time in the history of the organization … Tell us a little about how that shaped you as a leader, and how some of these rules you just shared may have applied?

GL: Yeah, John, this was a very interesting time, and I gained a lot of experience, and I hope that I never have to use that experience again in my career. Obviously, I had no experience dealing with a situation with 12 or 13 new board members [and] an activist investor who owned 10 percent of the company, who was obviously very opinionated on what we needed to do. I went into that very much at peace with whatever the outcome was going to be, and I believe that gave me the freedom to do what I believe was right for the organization, and, most importantly, for the people of the organization.

I worked hard at developing relationships with our new board members, my new chair, and then I worked very hard at communicating to a lot of people in our organization to let them know that everything was going to be okay, and that we were going to focus on the things that we thought were really important to improving all of our businesses.

I can’t say enough great things about Jeff Smith as our chairman and the other new board members that came on at that time. It was a very challenging situation, but everybody did a great job, and everybody put Darden first.

JM: What advice do you have for young people who are getting into the business today, and maybe one day want to be in the very spot that you are?

John Miller, president and CEO of Denny’s Corp., was named a Golden Chain Award winner in 2015.