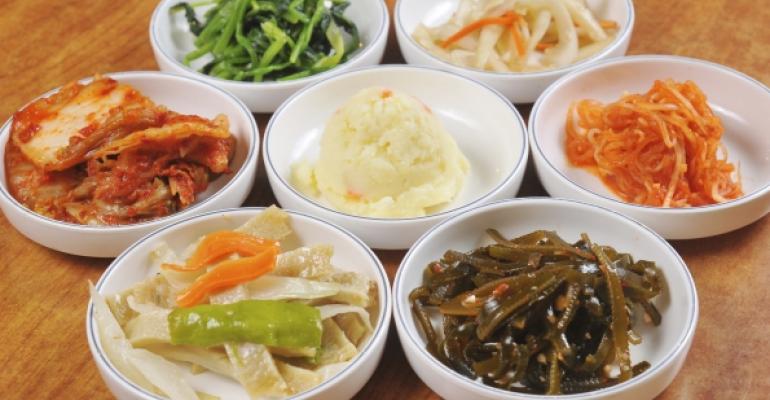 The rapid evolution of America’s palate: A discussion

In a monthly series, menu trend analyst Nancy Kruse and NRN senior food editor Bret Thorn discuss current trends in the restaurant industry. For this installment, they discuss the rapid pace in the change of Americans&rsquo; tastes.

Listen to the full conversation:

Kruse: Bret, you and I have spoken and written at some length about how open American diners have become to change. A number of factors have combined to facilitate that — the impact of the food media, the influence of chefs and culinary education, the change in immigration that favored Asians and Latin Americans — so that in a very short period of time we’ve become extraordinarily open. We’re now dedicated wine drinkers. We’ve embraced sushi: You can find it in supermarkets everywhere around the country. Lots of us have been experimenting with pickled or fermented foods like kimchi. From your point of view, are there examples of new foods or flavors that might have surprised you in terms of our collective response?

Thorn: I’m amazed at what some people have jumped on to. I never expected Americans to drink green tea, for example. It’s kind of bland, and what flavor it has is bitter. Those aren’t things that Americans usually like.

And remember how Brussels sprouts used to be thought of as the most disgusting thing that you could eat, and now they’re one of the trendiest vegetables out there. It’s interesting how quickly Americans’ taste can shift to embrace something that they once rejected.

Kruse: I’d like to talk a little bit about heat. From my point of view it’s nothing short of amazing how far the envelope has been pushed, especially by mass-market chains. I’m thinking of operations like Red Robin, or Popeyes, or Quaker Steak & Lube, and others who’ve gone so far as to promote ghost peppers, which score over a million on the Scoville Heat Chart.

Are these kinds of items strictly promotional gimmicks that give bragging rights to whoever is daring enough to step up, or do you think that this represents a longer term shift and acceptance relative to our collective tolerance for spicy foods? Where do you think we’re going to go from here relative to heat levels?

I think ghost peppers and other really spicy ingredients are gimmicks, but we actually are seeing a seismic shift in how Americans respond to spicy food. In fact, now the majority of Americans say they like spicy food.

According to Technomic research, as of 2013, which is the last time they conducted this study, 54 percent of Americans said that they like spicy food, and I think if you’d ask that question 15 years ago the vast majority of Americans would have said they didn’t like it.

I remember eight or nine years ago, talking to chain restaurant executives about spicy food. The way they tested their menu items at that time, everybody had to like whatever they were testing. It had to score high among the vast majority of their customers, and that meant that they never offered really spicy food because it was considered polarizing. Now the food even at mass-market chains has gotten a lot spicier. In 2013, McDonald’s launched a Bacon Habanero Ranch Quarter Pounder, and I tried it. It was pretty spicy.

We agree that there’s been quite an extraordinary broadening of our collective palate, and we’re much more open to all kinds of culinary experiences. But I’m curious what you think is the last frontier. From my point of view, the real obstacle to acceptance of lots of unfamiliar items isn’t really flavor or heat anymore, but texture. Specifically, I’m thinking of slime. I recall a few years back hearing Charles Phan, the wonderful Vietnamese-born chef-owner of The Slanted Door restaurant in San Francisco, talking about a dish that he had promoted very heavily that fell completely flat with his patrons. It was a chicken dish, very complex and time-consuming to prepare, and the reason that it’s prized in Southeast Asia is its intense sliminess, which is the reason why it was completely rejected out of hand by his American customers. What’s your take on this? Are there other slimy foods that have failed to make the grade with American diners? I mean, is slime ultimately going to be the bridge too far for most of us?

Thorn: I think there’s a huge gross-out factor for a lot of people when it comes to slimy food. I remember back in 2008 there were some Japanese exporters who were really trying to get Americans excited about this tuber called Nagaimo. It’s a root vegetable, which wouldn’t be that big of a deal, but for some reason it exudes all of this slime. So when you eat it, it just sort of slithers down your throat. I don’t know if I can really describe in polite conversation.

And for a while, here in New York, some of the Japanese soba restaurants would offer grated Nagaimo as a topping. It was like putting a glob of mucus on your food. It’s something the Japanese really prize and that they think is good for them, but it really didn’t take off here.

If you think about other jiggly or slimy foods, a lot of people have an aversion to runny egg yolks, and even mayonnaise can be polarizing. But on the other hand, some people really like runny egg yolks, and I think most Americans like Jell-O. So I think there’s a potential for people to wrap their heads around food with that kind of texture. I mean, think about pork belly, which is now almost past trendy in independent restaurants, and it has that kind of unctuous, creamy, slimy texture. Or bubble tea, which is tapioca that I’ve never found appealing, but some Americans like it.

Kruse: And at the moment oysters are just huge on menus. There have been some real shifts from the production perspective, so now they’re available all over the country, including on chain menus like Joe’s Crab Shack, and, depending on preparation, they may be more or less slimy, but I think most people would put them in the category of slime.

Or snails, my goodness, I wrote a piece last year on escargots, which are just everywhere on independent restaurant menus, despite the fact that they’re really pretty much of a turn-off for lots of consumers.

I know that in the past you have forecasted growth for slimy-textured foods. Do you foresee a real breakout or crossover item — something that might be the door opener that once and for all breaks down our aversion and allows us to finally embrace sliminess?

Thorn: There is one interesting, and I think kind of stupid, trend out there right now: bone broth. As you know, it’s simply broth, or stock, the foundation of most European cuisines. But people have suddenly discovered it as though it’s an invention. It’s been popularized by people on paleo diets and by professional athletes, and by chef Marco Canora here in New York, who had a window that he could sell things out of and all these bones left over from his regular cooking at Hearth Restaurant. He opened Brodo and now sells broth for around $8 in paper coffee cups, and people are drinking it up.

But if you make a good broth, especially if you’re emphasizing the bones that you’re making it with, you’re going to get a lot of gelatin. And if you let it chill, it’s like meat Jell-O, except more jiggly and oozy than regular Jell-O.

In the 1950s, we used to eat that as aspic. Maybe bone broth will get people excited about that sort of thing again.

Kruse: I think that’s something to keep an eye on because, as you know, broth is super, super hot, and maybe we should check back in on this conversation in a number of months, or maybe a year from now, and see whether or not we came close to hitting the mark.

Thorn: I think that’s a good idea. As I said, 10 years ago when someone pitched me about green tea I basically said, ‘Shut up, Americans are never going to drink green tea.’ Well, last time I checked green tea was 40 percent of the domestic bottled, ready-to-drink tea market.

Kruse: So things do change.