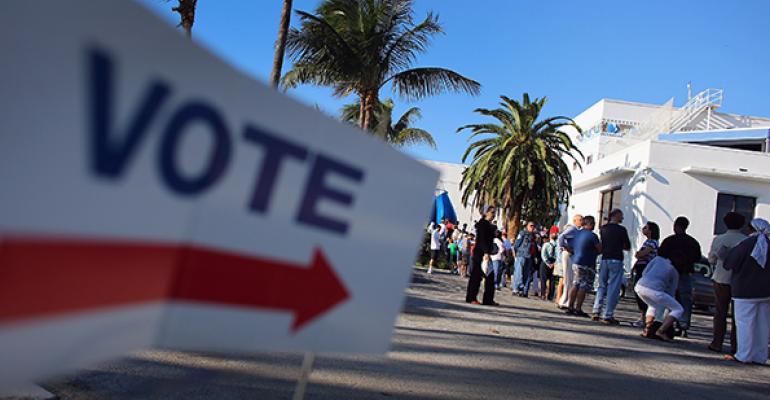 Opinion: What the Election Day results mean for businesses

Coming out of the 2014 elections, Republicans won by historic margins at the state level, installing 31 Republican governors and winning control of 67 of the 98 state legislative chambers.

On Tuesday, Republicans not only defended those advances, but added to that margin by winning decisively in Kentucky. At the same time, Democrats swept mayoral races in the largest metros across the country, most notably Charlotte, N.C., Columbus, Ohio, San Francisco, Orlando, Fla., and Philadelphia. Democrats also gained the mayor’s office in Indianapolis.

The end result for the business community is probably more of the same: the partisan gridlock in D.C. will continue to create a dynamic where employer issues creep into state capitols and city halls across the country, with employers having to continue to defend their employment practices in city after city.

That gridlock could very well reach a fever pitch heading into the 2016 elections because it’s likely that both sides will emerge from Election Day feeling that they have a mandate from the voters "to lead." More big-city mayors will pursue progressive agenda items like paid leave, huge minimum wage increases and scheduling mandates, and Republicans at the state level will continue on a path to rebuff the Obama agenda.

For example, Kentucky governor-elect Matt Bevin nationalized his race by portraying his opponent, attorney general Jack Conway, as a supporter of national Democratic priorities like gay marriage and Obamacare that were unpopular with conservative Bluegrass Democrats.

"For entry-level employers, the political winds have chosen you to be one of this cycle’s piñatas."

On the other end of the spectrum, Philadelphia mayor-elect Jim Kenney secured the Democratic nomination — and ultimately the election — by running to the far left of the entire field, endorsing a $15-an-hour minimum wage, among other progressive agenda items.

The results also highlight that the political divide between urban and suburban/rural America is as pronounced as ever. That’s not necessarily news, but traditionally, these two groups of voters haven’t been so neatly organized on the ideological spectrum. In the past, some issues cut across geography or political affiliation. This divergent dynamic continues to erode constructive policy conversations, and every Trump Twitter bomb and Fight for $15 meme pushes us closer to total disfunction at every level of government.

While we always hope that sound public policy will win the day, both sides of the aisle would be wise to exercise caution on account of political considerations. The White House in 2016 is the ultimate prize, and while Republicans have cause to celebrate, the electorate that showed up yesterday (and in 2014, for that matter) is very different than the voters who will show up on Election Day 2016. For Democrats, voters in the liberal bastions of Portland, Maine, and Tacoma, Wash., rejected a $15-an-hour minimum wage mandate, demonstrating that ideology won’t always trump common sense.

How is your business preparing for the 2016 elections? Join the conversation in the comments below.

Unfortunately, those learnings will probably be lost in the shuffle of primary season. With the 2015 elections now in the books, today is the official start of the 2016 campaign season. Right on cue, and timed to coincide with the Republican presidential debate in Milwaukee on Tuesday, employers will again contend with protestors on their collective doorstep as the Fight for $15 campaign executes its largest “National Day of Action” to date.

For entry-level employers, the political winds have chosen you to be one of this cycle’s piñatas, and everybody has a political mandate from the voters, so buckle up and hang tight.