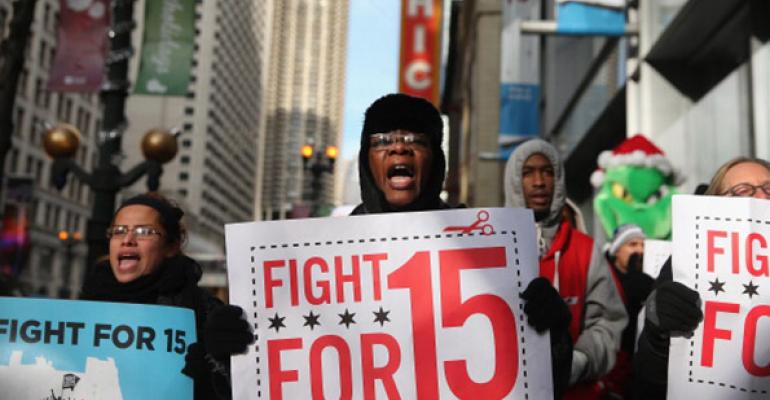 <p>Demonstrators demanding an increase in pay for fast-food and retail workers protested in Chicago in December 2013.</p>
News

Opinion: The national dialogue around Fight for $15

Over a decade ago, a then-relatively little known author named Malcolm Gladwell published a book that has become a seminal work when it comes to identifying and discussing that point when a nascent trend blossoms into an actual movement. “The Tipping Point” examines a myriad of case studies identifying not only the moment in time (the tipping point) when consumer products go from fringe to fashionable or diseases escalate from outbreaks to pandemics.  It also examines a variety of public policy issues ranging from drug abuse, poverty, economic development and even smoking and identifies when they went from isolated, parochial issues to front and center in the national dialogue.

Another public policy issue important to entry-level employers that has reached a significant tipping point in recent months is the minimum wage, and more specifically, the effort to attain a $15 an hour national minimum wage.  Up until this spring, the escalation in the rhetoric on the issue had seen a slow, steady and measured trajectory. There are now a majority of states with minimum wages higher than the federal level and that escalation has been spread over nearly a decade. With relatively few exceptions, the wage levels set by those states were at or near the $10 an hour level. And, as a general rule, even in those same states there has been a small but vocal echo chamber of proponents calling for higher — and sometimes significantly higher — wage levels.  But, the general consensus between elected officials, business leaders and other community stakeholders in most jurisdictions was that the $9-10 range was the “right space.”

In the last two years, the SEIU (Service Employees International Union) spent significant dollars (nearly $100 million) funding groups like “Fight for 15” to advance the cause of a national $15 an hour minimum wage. And for most of those two years, the receptiveness of a wage at that level was minimal at best and resonated with only the most strident and extreme of the activists groups. It stayed that way until fairly recently. In fact, just this past January, President Obama called for an increase in the federal minimum wage, but only to $10.10 an hour — significantly less than his most ardent supporters’ preferred level of $15.

So the question is: how did we go from the President calling for $10.10 per hour in January to almost every major Democratic candidate in this election cycle endorsing a $15 wage by June? Where was the tipping point when a “fringe” number like $15., which seemed ridiculous to most observers, became mainstream and the center-point of the national conversation?

As always, the answer can be found behind Door Number 1 — the one with the word “politics” on it. The game changed when the SEIU/Fight for 15 cabal graduated from a grassroots organizing movement to a legitimate political force.  That graduation ceremony took place in Chicago this past February when Mayor Rahm Emanuel, up until then seen as fairly politically secure, was pushed to a run-off in his reelection campaign against a sitting Alderman who, as a self-described “community organizer,” is particularly close to organized labor and their activist allies.

In that election campaign, out of nowhere, a significant increase in the minimum wage became a central issue — so much so that late in the campaign, Mayor Emanuel rammed through a wage increase to $13 per hour a few weeks before election day. His opponent, Chuy Garcia contended that the increase wasn’t high enough and vowed that, if elected, he would take the wage to $15 per hour.  The issue complicated what should have been a fairly easy re-election for Emanuel and pushed him to a run-off that he would ultimately survive.

What is your restaurant's plan for handling minimum wage increases? Join the conversation in the comments below.

The Chicago mayoral election was, in effect, the warning shot heard ‘round the country. Within weeks, we had $15 wage proposals pop up in Kansas City, St. Louis, Los Angeles and New York as incumbent mayors tried to protect their left flanks from the same kind of assault that Emanuel faced. Now, the Democratic presidential candidates have all fallen in line behind a $15 wage.  In the span of a few months — January to April — the notion of a $15 wage went from extreme to mainstream, from hypothetical to real.

The election in Chicago was the tipping point.  That was when $15 went from a policy aspiration to a political football. As such, it is here to stay. The game has changed — the only question now is how high the score goes.