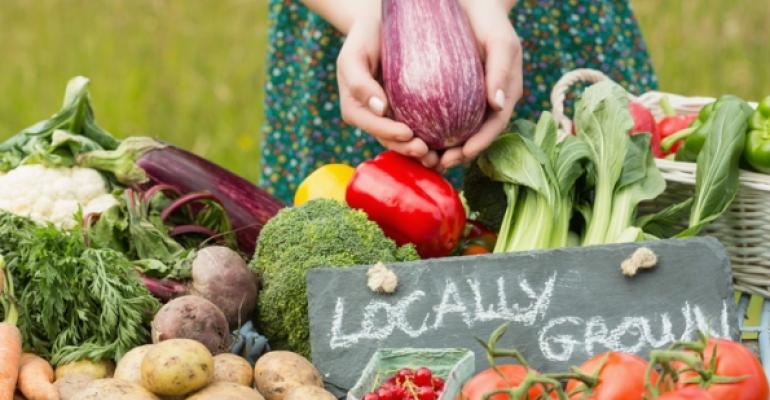 Nancy, a few weeks ago I was having dinner at the James Beard House in New York City, sitting next to a woman who had recently retired from a Wall Street firm. She looked at the printed menu detailing everything that we were about to eat and asked if people really cared about what farm a vegetable came from.

“I mean, I assume it didn’t come from somebody’s roof!” she said, unaware that rooftop farming is a thing now, and a desirable thing in many people’s eyes. It reminded me just how much times have changed.

You and I have discussed in the past how tired we are of hearing about the farm-to-table movement — that it’s a nebulous term that doesn’t really say much about the restaurant, and that it tends to give restaurants an air of self-righteousness that can be pretty unpalatable.

Bret Thorn introduces a discussion on the Farm to Table trend

But the provenance of food is apparently so important to some restaurant goers, although not my Beard House dining companion, that restaurateurs from coast to coast are lying about it. And they’re lying about it so much that journalists are actually doing their jobs and calling them out on it.

My social media feed was on fire recently with discussion of an excellent series by Tampa Bay Times critic Laura Reiley called “Farm to Fable.”

Did you see it?

Just kidding; I know you did because you sent me a link to the story.

Reiley read menus at restaurants that mentioned the farms where their food was supposed to have come from, then she asked the farmers if they sold to those restaurants, and when they said they didn’t she confronted the restaurants and asked them why they were such liars.

Sometimes it was an oversight — a menu that hadn’t been rewritten after purveyors were changed — sometimes it was more nefarious, and sometimes it was pretty darn insulting, like the restaurant with the tagline “Death to Pretenders” that pretended to make its own cheese curds and claimed to use wild local shrimp when in fact it was farm-raised in India.

As a journalist, I loved reading it. As someone who believes in giving credit where it’s due, I’d like to point out that the excellent turn of phrase “farm to fable” was actually coined in June of last year by Troy Johnson, who wrote a similar story, without naming restaurants, in San Diego magazine.

As a guy who reports on the foodservice industry for the foodservice industry, I kind of felt bad for the restaurants that got exposed — except for the “Death to Pretenders” one; if you’re going to be a smug, self-righteous jerk then you’re on your own — but hey, you’re not supposed to lie about where you get your food. Apart from the fact that it’s, you know, wrong, in this day and age, when legions of people are armed with video cameras on their phones and social media networks where they can say whatever they like, there’s a good chance you’ll get exposed.

So what do you think of all of this, Nancy? What does it say about American food and the farm-to-table movement that operators are lying about it, and that the press is mad enough about it to start exposing them?

Why we have foodservice distributors

First things first, Bret: I totally agree that Laura Reiley’s article is a remarkable piece of investigative journalism, comprising thousands of words and, by her own calculation, months of hard work.  After zeroing in on 54 restaurants that made farm-to-table claims, she literally sifted through invoices, contacted distributors, visited farmers and queried suppliers of all stripes to verify their assertions. Using zip-lock baggies tucked into her purse, she even spirited samples of fish that seemed a little fishy to a lab for DNA testing—all of which constitutes a level of forensic analysis typically reserved for TV dramas and FBI agents trying to break into iPhones. The net result, as you point out, was some very red faces. I suspect that we all enjoy a good gotcha and relish seeing miscreants caught out, and there were "gotchas" galore in Tampa Bay area after her story broke.

Like you, I deplore duplicity. It’s simply not okay to deliberately misrepresent your dishes to your diners. But I think what Reiley exposes is the inevitable result of a combination of factors, including the lack of standards of identity to govern the term local, romantically unrealistic expectations on the part of patrons, and exertions of chefs hell bent on keeping customers happy while keeping a leg up on competition.

The unromantic fact, as Reiley correctly points out, is that most restaurateurs just don’t have the wherewithal to ride herd on myriad farmers and producers, and most farmers don’t have the infrastructure to deal efficiently and consistently with the demands of a commercial kitchen. That’s why we have foodservice distributors.

Nancy Kruse shares her insight on Farm to Table

As I plowed through her exhaustive catalog of misbehaviors, though, a few things bothered me. The first is Reiley’s paean to the virtues of locally grown comestibles; she writes that, among other things, they deliver food that’s fresher and better tasting, promise better food safety and yield a smaller carbon footprint. This last claim is tough to defend in view of the fact that she says the average restaurant works with 300 ingredients. This would mean hundreds of little trucks roaring around Tampa polluting the heck out of the environment vs. a restaurant’s daily visit from a broad-liner and maybe a few specialists. The food safety claim is also hard to support given Chipotle’s recent difficulties with food-borne illness. While the cause of multiple incidents in multiple locations is still under review, the chain has acknowledged the need to tighten up controls when working with its network of local farmers. As for taste, while I agree there’s nothing better than a juicy peach or fresh strawberry in season, it seems to me that in the restaurant setting, it’s the craft of the chef that creates the magic regardless of provenance of the raw materials.

Reiley notes that one chef whom I admire very much, Jeannie Pierola, never mentions the source of ingredients on her menus because she assumes “my guests know I am always pursuing the best product.” That’s what I’m talking about.

Then there’s Reiley’s snapshot of the pizzeria operator who truly toes the farm-to-table line, serves organic ingredients, makes his own mozzarella, sausage and yogurt and hasn’t eaten asparagus in years because it’s not grown in his area. Bret, I want to tell him to step away from his compacter. Life is short, and I personally can’t imagine going through it without champagne shipped all the way from France.

While I respect his right to do what he thinks best and I actually admire his discipline, perhaps he should consider that the farmers growing asparagus outside his state work just as long and hard as the farmers growing his tomatoes inside it. I believe they’re equally deserving of his support. Besides, our capability to efficiently move goods across country and to fill in the blanks with products not grown locally is one of the marvels of our economy, and I believe it’s one well worth supporting.

You question whether consumers really care about all this. Of course, many do, however they may be willing to reconsider. Reiley recounts an amusing story about a stiletto-wearing woman reporter who, camera crew in tow, charged into a Florida spot that purported to sell lobster rolls. It turns out said rolls were actually made from less expensive pollock or whiting. The result of her muckraking: the restaurant now sells more “lobster” rolls than ever with no change of ingredients. Priced at $9.95 including French fries and cole slaw, they’re an irresistible value to consumers, many of whom learned of their existence thanks to the TV report. I guess this just proves the old adage that there’s no such thing as bad publicity.

Speaking of bad publicity, Laura Reiley also wrote an equally detailed and totally hair-raising companion exposé of farmers markets. She visited a dozen different markets, counted 346 discrete vendors and found that only 16, or less than 5 percent, of “farmers” actually grow stuff on their own farms. The rest are a bunch of wholesalers and resellers of supermarket rejects. Consumers “fill string bags with produce. And few people seem to know that there are nearly no farmers. That this stuff came from Mexico, Honduras, Canada. That your grocer has already passed it over.”  You mean those earnest guys in their overalls are a bunch of liars? It’s another case of farm to fable, Bret, and it’s enough to make me reach for my champagne bottle.

All Soundcloud images in this article are sourced from Thinkstock.