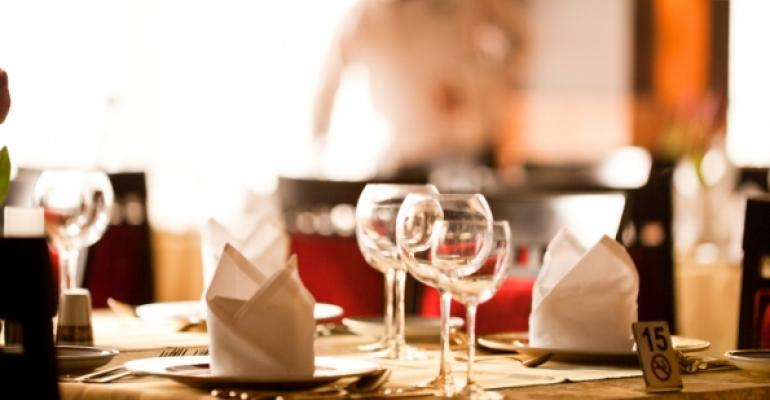 Are there just too many restaurants?

Wallace B. Doolin is an NRN contributor and chairman of TDn2K, the holding company of People Report, Black Box Intelligence and White Box Social Intelligence. This article does not necessarily reflect the opinions of the editors or management of Nation&rsquo;s Restaurant News.

Several years ago, I drove around the Phoenix market with a franchise owner who had successfully navigated the build-and-bust cycles in the telecom industry. As we approached busy trade areas, he would point to a bank and say, “There are too many banks.” Next would be car lots, phone stores and, yes, restaurants. Finally, the comment that has rung in my ears for years: “There is too much of everything!”

As I have experienced the ups and downs of the restaurant industry’s growth, that foretelling comment has always ticked in the back of my mind.

Now fast forward to January 2016. As I enjoyed a beautiful morning in Key Biscayne, Fla., with a great cup of coffee and the rare read of a print newspaper, a Miami Herald headline caught my attention: “Record breaking year in Dade County (Miami) for new restaurant openings”.

In my line of work, who needs cream in their coffee with a story to read like this? In fact, Dade County had 627 new restaurant openings in 2015, an all-time high. It was the most of any county in Florida, including the approximately 424 openings in Orange County (which includes Orlando) and 336 in Broward County (home of Fort Lauderdale). In other words, last year almost 1,400 new restaurants opened in just three Florida counties.

This leads me to suggest three big potential trends occurring in the U.S. restaurant industry:

1. Consumers and our restaurant guests

We have been discussing for several years that after the Great Recession the industry would return to pre-recession growth rates. I now question if that will be true. I’m afraid my franchise partner’s vision may be right both from a restaurant industry perspective (too many restaurants) and the consumer mindset of “What else do I need?”

The economy has improved, but industry average same-store sales are still in what we suggested in Black Box Intelligence four years ago, a “1.0 percent world.” Seldom up more than 1 percent or down more than 1 percent in same-store sales, notwithstanding a continual 2-percent to 3-percent increase in average check. More alarming are the negative traffic numbers for the past seven years.

Who opened all those restaurants in three counties of Florida? I assure you it wasn’t just the 130+ great chains that TDn2K tracks domestically, representing more than 24,000 restaurant units. It has to be a predominance of independents and regional restaurants that are tapping into the consumer quest — often fueled by Millennials — for the local, the new and the unique.

Like most of you reading this, I grew up in an industry where chain restaurants took share from the independents year after year. Has that changed in the largest and urban markets? My hunch is yes.

The executives of TDn2K’s member companies constantly ask about the growth of independents and regional restaurants and how they impact sales and traffic. Just the initial trial of all those new restaurants has to create a ripple for established competitors. Of course, we know there is a high failure rate, usually in the first year or two, but in the meantime these new entrants steal occasions and share.

We hear a lot about workforce shortages and wage pressures. Our own People Report data shows increasing difficulty in recruiting and hiring qualified employees and managers, and increasing wages. In fact, turnover rates have returned to pre-recession levels in all segments.

Again, feedback from our members reveals frustration in the quality and quantity of applicants. About wages, several leading restaurant executives have told me that they are becoming more aggressive in their compensation to ensure they can retain their own talent, and steal the top of the market from their competitors. Is this only a function of supply, or are we back to the “too much demand” scenario?

• Does someone have to fail for me to grow?

• What does that mean for my restaurant and my company?

• What could I recommend to readers and restaurant operators?

What you can do

1. Don’t settle for average. We have been forced to settle for beating the median or average on any metric. As this chart of 2015 results shows, the difference in the top and bottom quartiles in Black Box Intelligence was 4.4 percent in comp sales. People Report data showed that top quartile performers experienced much lower management and hourly turnover — 19 percent and 31 percent, respectively. The final data point is for the 15 companies we recognized as top performers in the workplace. They collectively delivered 2.1-percent higher comp sales than the average in Black Box Intelligence. 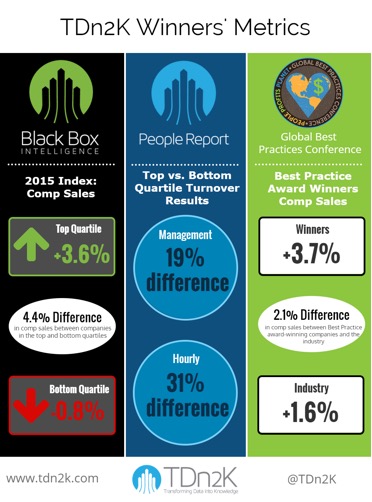 2. Ask for more out of your top performers. As one very respected and successful CEO confided in me, they focus on the restaurants that matter most with higher unit sales rather than the bottom of the list that may have market or site problems.

3. Know how you stand in every restaurant and market versus your competitors. I realize this may sound self serving, but it is the new reality. Unless you are the top brand, you have to know how and where to improve in your key measurements of sales, traffic, turnover and customer feedback. As I often say, “You win a market-share battle one restaurant and one market at a time.”

As last year and the first quarter of 2016 have taught us, we have a new normal. It is different than we expected and hoped for post-recession. With that reality in mind, I leave you with this thought:

As a sailor, I always liked the saying that a rising tide lifts all boats. I now believe that this economic tide will not lift all brands. Still a sailor, regardless of the wind, you get to set your own sails.