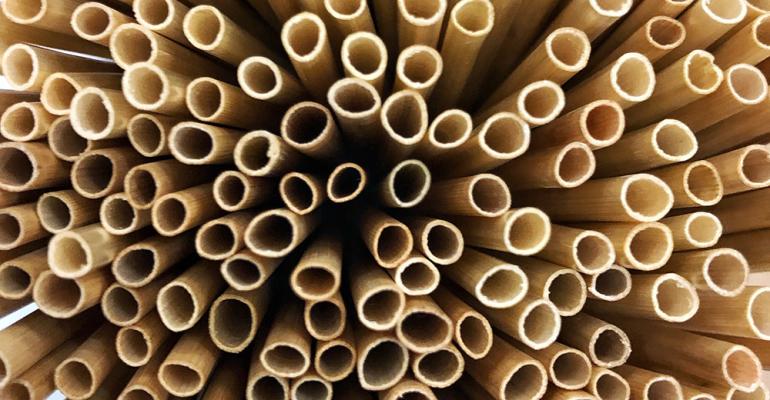 What’s new in sustainable packaging on the NRA show floor

Disposables are increasingly compostable, tamper-proof and made with fewer chemicals

As more restaurant companies look to composting as a way to divert waste from landfills, compostable packaging is on the rise. At the NRA Show this year, one clear theme was the increase in disposable serviceware, from straws to tamper-proof clamshells. And a growing number of such products are compostable.

Many suppliers are gearing up for new standards going into effect in 2020, when the Biodegradable Products Institute, which certifies packaging as compostable, will restrict — and eventually eliminate — the use of fluorinated chemicals known as perfluorinated or polyfluorinated, or PFAS, often used as a grease-proofing barrier or to keep cups from leaking. Composters and some municipalities have expressed concern that PFAS could be harmful in soil. In San Francisco, for example, all compostable foodware must be BPI certified and must include no added fluorinated chemicals, starting in 2020.

Here’s a look at what was new on the show floor.

--Ozzi, based in New Kingstown, R.I., is a four-year-old company offering a unique system of reusable plastic containers that are designed to eliminate the need for disposables. Ideal for foodservice programs at universities, military bases, corporate campuses or other settings, the system includes an automated collection box, where guests can return the sturdy, bright-green containers after use. If not returned, the guest is charged $5 per container. 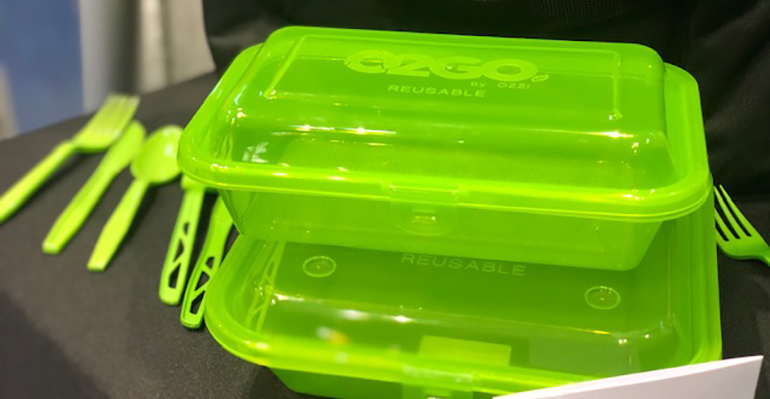 The containers are washed, sanitized and returned to the foodservice outlet. They can be reused up to 300 times (and at the end of their life they are shredded and recycled into yogurt cups).

Ozzi officials said about 100 college campuses across the country are using the system, and some cities, like Truckee, Calif., for example, are starting to launch programs for restaurants.

--Minima, based in Taiwan, supplies compostable straws to chains like Starbucks. New this year, however, is a compostable to-go straw that comes in clear plastic-film wrapper, and that wrapper is also compostable. Minima also makes a line of compostable cutlery free of bisphenol A, or BPA, an industrial chemical in polycarbonate plastics that can leach into food, as well as various other alternative plastics for things like toothbrushes, sunglass frames and packaging tape.

--Canada-based Eco Guardian has a new line of Lock n’ Go compostable containers with tabs that glue closed to prevent delivery drivers from tampering with food, which has become a growing concern. Several packaging manufacturers at the show said they also were working on tamper-proofing features for their products.

Eco Guardian’s containers are made from sugarcane fiber or bamboo, with the option of both clear and non-transparent-fiber lids or base. Rather than a hinged clamshell, these containers are separate pieces, which creates less waste if used for dine in, when a hinged top might not be necessary. 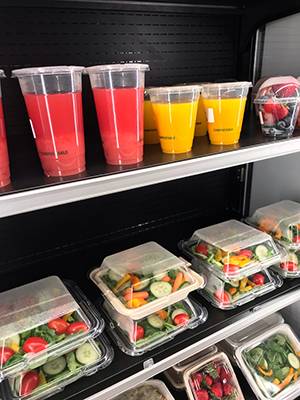 That gives operators the option of putting two clear containers together, for example, for a cold item, or two fiber pieces together for something hot — or they can put a clear lid on a fiber base to mix and match. All are certified compostable, including the glue on the tamper-proofing tabs.

--Japan-based Stalk Market has a new line of certified compostable plates and serving platters designed for dine in called Wasara, made from sugarcane, bamboo and reed pulp.

More like sculpture, these attractive pieces are designed to reflect the elegant lines of Japanese architecture. There are no lids, but they are stackable to create stunning pinwheel-like presentations.

--Eco Products, based in Boulder, Colo., was promoting its compostable cutlery, including a new line with no added PFAS to comply with upcoming standards. In addition, the company debuted its new “Cutlerease” dispenser that serves up knives, forks or spoons one at a time, with another popping neatly into its place. This eliminates waste and sanitation issues created around traditional cutlery holders which can appear cluttered and messy.

--Hay! Straws makes biodegradable straws made from straw stems, a biproduct of wheat production after the grain is harvested. The stems are rinsed, soaked, washed and air dried to create a straw that functions just like plastic, and can be used in hot and cold drinks. 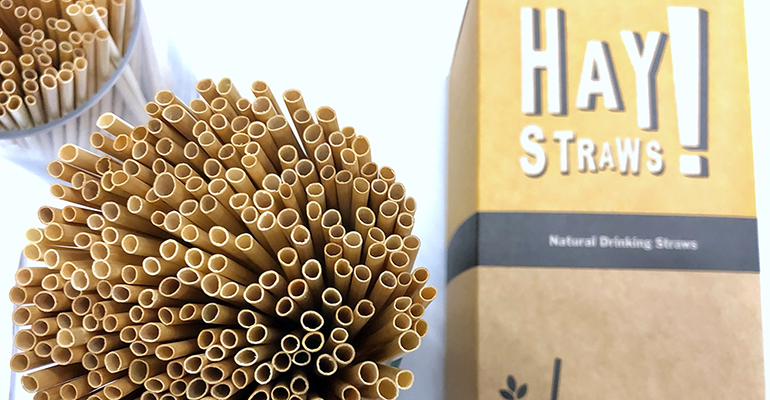 New from the San Francisco-based company this year is the addition of three new sizes: Jumbo, Jumbo XL and Boba Hay straws, which are designed for beverages that are thicker and chunkier, like smoothies, shakes or boba teas. 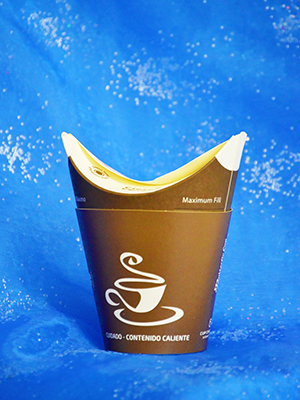 --Making its first appearance at the show is the recently launched Butterfly Cup, a paper cup that folds into a modified sippy cup of sorts, eliminating the need for plastic lids or straws, though some models include a straw hole, if desired.

The Spartansburg, S.C.-based company offers a compostable version that is currently BPI-certified, though CEO Ackshay Vashee said they are working on meeting the new standards for next year.

--Georgia Pacific was showing off what it calls the first disposable Dixie cup made from 100% recycled post-consumer fiber. In addition, the company also demonstrated its prototype auto-sealing beverage system that puts a sealed leak-proof lid on cups to prevent delivery drivers from taking a sip while the beverage is in transit. 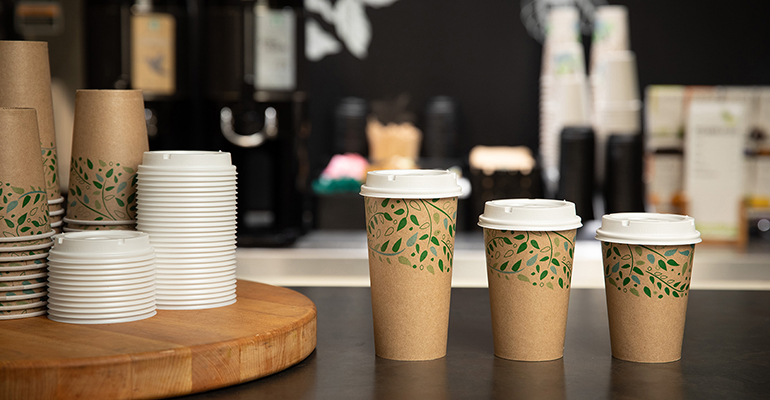