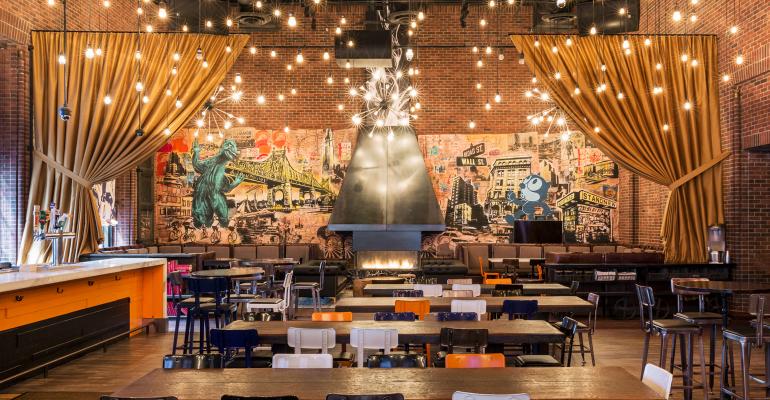 Poised to accelerate growth around the world, Disruptive Restaurant Group is developing quick-service variations of its Umami Burger and Katsuya brands to build a more flexible portfolio of options for franchise partners.

Sam Nazarian, founder and CEO of New York City-based Sbe, which operates Los Angeles-based Disruptive Restaurant Group, said the company plans to grow 22-unit Umami Burger as a quick-service burger-focused brand, following the model of two limited-service outlets that are currently open. One is at Los Angeles International Airport and the other is in New York City’s Hudson Hotel.

Moving forward, the brand’s full-service Umami Burger restaurants will drop the word “burger” and simply be called Umami, reflecting an expanded menu launching this spring that includes much more than the chain’s signature burgers.

“It’s like when Starbucks dropped the word ‘coffee’ in its name,” Nazarian said.

Additionally, this year the group will debut a limited-service version of Katsuya, a stylish high-end brand developed with famed sushi chef Katsuya Uechi, which has been growing around the world. There are 12 full-service Katsuya restaurants in the U.S. and overseas, including in Bahrain, the United Arab Emirates, the Bahamas and Qatar.

The quick-service variation — scheduled to debut in the fourth quarter or early next year, with locations first in Los Angeles and New York City — will be called Krispy Rice, a nod to Uechi’s signature crispy rice sushi, a top seller, Nazarian said. Uechi’s original crispy rice sushi features tuna, a dish that goes back to the trendsetting original Sushi Katsu-ya restaurant that opened two decades ago in Los Angeles. At the new Krispy Rice, various proteins will top the crispy rice offerings and the menu will be limited to “best of” dishes from the full-service Katsuya, Nazarian said.

Krispy Rice is aiming for an “approachable” average check of about $20 to $35 and will offer lunch and dinner with robust off-premise offerings available to go, he added. Units will be roughly 1,500 square feet.

The goal is to create options that will allow the company and its franchise partners more flexibility to expand the brands in various sites. Next year, limited-service variations will also be developed for Disruptive’s other brands, including the Mediterranean restaurant Cleo and the Italian concept Fi’lia, he said.

Disruptive has embarked on a plan for rapid expansion.

The group “has had huge growth in the U.S. Just year-over-year, we’re up about 17 percent” in revenue, Nazarian said. “That’s given us a lot more confidence to focus on international expansion.”

The group has signed a deal with a franchisee in Mexico to open 40 standalone Umami and Umami Burger restaurants and five Katsuya/Krispy Rice locations within five years.

Umami Burger also continues to expand in Japan, which Nazarian said is opening doors elsewhere in Asia, including Korea and Malaysia. The brands are also growing in the Middle East in partnership with M.H. Alshaya Co. Domestic growth is planned both inside and outside Sbe’s collection of hotels, Nazarian said. The company expects to open its 13th Katsuya location in Miami in about 30 days at the group’s SLS Lux Brickell hotel.

“Malls are becoming more centric on the experience of food and beverage,” Nazarian said. “It’s a perfect time for us.”

Meanwhile, Disruptive plans to add a new Mexican concept and a meat-focused steakhouse to its the portfolio this year, although Nazarian said it’s too early to offer details.

“There will be a huge amount of innovation around all the brands,” he said.