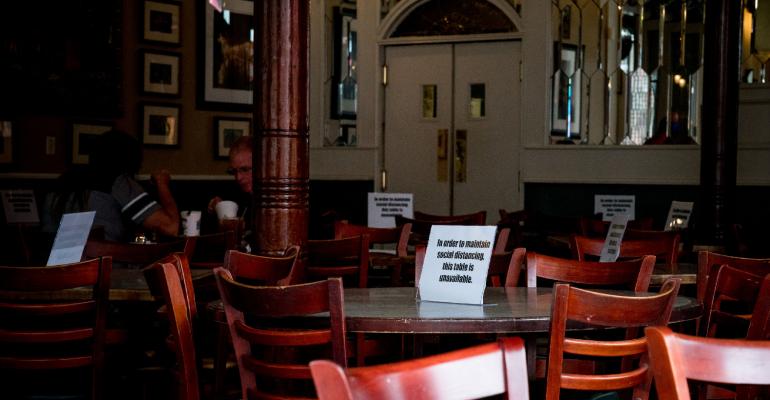 CLAIRE BANGSER / Contributor / AFP / Getty Images
Testing and tracing is a key to managing any contagious outbreak, but it’s made even more important in the case of the novel coronavirus because people who are carriers of the virus usually don’t have any symptoms.
Operations

The trouble with tracing: Restaurants struggle with COVID-19 tracking requirements

Controlling a potentially deadly disease that usually has no symptoms is hard enough, and varying rules are making it even harder

Restaurant operators are used to dealing with infectious diseases, having battled the spread of illnesses like Hepatitis A, infectious tuberculosis, norovirus and others for years. But now the deadly and highly contagious coronavirus — and attempts to track who has it — has become an increasingly difficult challenge for public-facing restaurants as they open for dine-in business amid a hodgepodge of tracing regulations.

“We are hearing a sense of panic and a sense of mayhem across our client base over the past 48 hours that is unlike anything we’ve ever seen before,” she said in late May, adding that legal teams at even the largest foodservice companies have trouble keeping up with the new rules, which are frequently updated and changed, or unevenly enforced.

Miami, for example, has some of the strictest regulations in the country, including requiring all employees at a restaurant to be tested for COVID-19 if one employee tests positive — but if restaurant operators call the health department, they’re told that the testing rule is not a requirement, but just a suggestion, Stone said.

Then in Colorado, which was given the go-ahead to reopen last week, any positive cases must be reported by the restaurant owner to the health department. That’s different from other illnesses, which are reported by hospitals or medical labs.

And if you have two positive cases at one restaurant in Colorado, the health department alerts the media, Stone said. However the department is only naming the restaurant and indicating what county it’s in, according to local media.

That might be all the public needs to know for independent restaurants, but cases named recently by a local TV station included a McDonald’s in El Paso County, home of Colorado Springs, which has a population of nearly half a million people and dozens of McDonald’s locations.

Testing and tracing is a key to managing any contagious outbreak, but it’s made even more important in the case of the novel coronavirus because people who are carriers of the virus usually don’t have any symptoms.

The principle is simple. If you are infected with the virus, anyone who has been within close proximity of you — within six feet for 30 minutes or more, whether wearing a mask or not, according to a guidance for the Centers for Disease Control and Prevention, or CDC — must be isolated for 14 days.

“Keep in mind that almost every contact tracer who has been hired is new to their job,” Stone said. Because of the magnitude of the pandemic, many thousands of people have been hired, and they’re not tested on their knowledge of how restaurants function.

Stone described an incident in North Carolina in which a contact tracer informed a restaurant worker he’d tested positive. The tracer asked the worker who he lived with and then asked him for five names of the people he worked most closely with.

“Next thing we know, no one shows up for the next shift at the restaurant,” Stone said.

That’s because the employee just named the five people whose names he knew.

“They were not the people he worked most closely with,” Stone said. But those five people were contacted and word spread.

“Everyone was afraid, no one came to work, and they had excluded the wrong five people,” Stone said, adding that five, obviously is an arbitrary number.

A similar incident happened in Georgia and the employer wasn’t informed.

“Then it happened in Florida,” she said.

“We’re finding that the use of contact tracers are interrupting the contact-tracing processes the restaurant industry has gotten in the rhythm of” over the past two months, Stone said, adding that operators had a head start in isolating workers due to their experience with norovirus.

Larry Caplin, CEO of medical services company docs.health, said restaurant workers might not even know who they’ve been in close contact with. Schedules change frequently, and if someone is working behind you, you might not even be aware of it, he said.

Wellness checks of employees are now required by most jurisdictions, and they usually require a checklist of questions regarding whether employees have COVID-19 symptoms such as sore throats or new coughs, as well as a temperature check.

Caplin said technology exists, from his company and elsewhere, that links those wellness checks to scheduling software, allowing for restaurants to conduct their own contact tracing.

“Contact tracing with computer technology is going to have privacy challenges and civil rights challenges, and I’m not sure how that’s going to play going forward,” he said, although getting employees, and customers, to voluntarily opt in to the tests might be a solution.

He said refusing service to customers who didn’t opt in to a wellness check might pass legal muster, “especially in the time of this crisis. Say ‘Look, if you’re not willing to complete the health questionnaire, then we’re not going to complete the reservation.’”

Stone said she suggests that operators do conduct their own contact tracing, because they are likely to know that their employee is probably COVID-positive before the health department, and can isolate them and those they’ve been in contact with more quickly. The result could mean fewer employees requiring isolation and falling ill.

“We do believe that restaurants should be doing their own contact tracing if only to get a head start and have all the information handy when [they] hear from the contact tracer. They can say, ‘Here’s who they worked with, here’s what we did with those people, we sanitized the restaurant. Is there anything else you want us to do?’ And more often than not the answer is, ‘Great job.’”

Caplin warned, however, that even if you try to screen out employees and guests who seem to be COVID-positive, operators still have to assume that everyone in their restaurant is contagious, since most people who carry the disease have no symptoms.

Stone said that, as tests for the virus are becoming more widely available, more people who aren’t symptomatic are “curiosity testing” anyway.