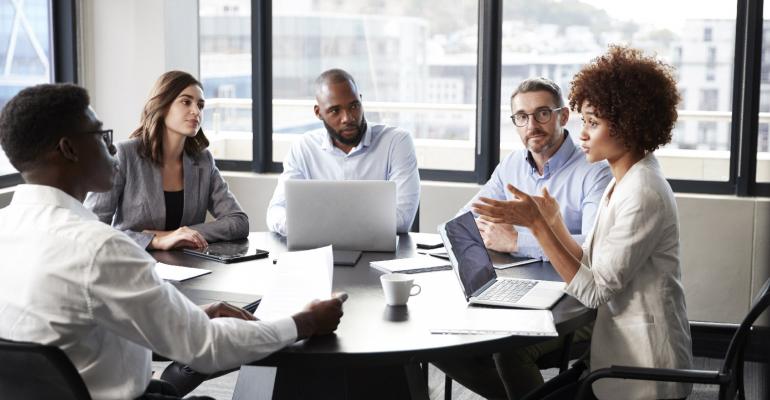 monkeybusinessimages / iStock / Getty Images Plus
A solid and inspiring foundation is the reason a concept is greenlit for growth.
Operations

Think like a founder: How to make cuts at your restaurant without losing the essence of what makes it special

It’s Thursday at 2 p.m. in the boardroom. Occasional shuffling of papers breaks the silence. Each board member feels the pressure mounting. There have been three straight quarters of negative growth. The meeting’s purpose is to identify a strategy that stops the downward trend and calms nervous lenders and investors.  Board members represented by management and equity contemplate:

Then, someone speaks up, “What if we cut the portion size of…? How much will we save? Will anyone notice?” Another voice chimes in, “Do we need a runner? How much will that save?”

And so, it begins! Gravity at work, trying to pull down the essence of what made the business special. Board members and management think they’re cutting fat, but often they’re destroying the foundation of what made the enterprise successful.

The guest is the underrepresented constituent at the board table. That is, unless, there is a great operator, who are always unapologetic guest and employee advocates. Once the concepts are conceived and locations selected, the operators fulfill their passions to create a hospitality experience that delights their guests.

Great operators are obsessed with observing their guests. They watch from a distance and relish guests’ expressions as they enjoy the first bites. They note the smile on a server’s face as he or she answers questions regarding the menu.  Great operators also anguish over a guest’s disappointment or a server’s frustration. And if the operator is one of the lucky ones, they’ll garner interest from the investment community and have an opportunity to grow and spread their particular brand of delight.

Unfortunately, layered into every growth story are inevitable missteps.  Incidents that result in traffic decline and closures, leaving boards and management teams to debate a new strategy after negative growth begins. “We have to do something, but what?”

Grady’s is a story of the unintended demise of a wonderful restaurant chain.  Grady's Goodtimes, founded in 1982, was a made from scratch concept with highly motivated employees. By 1988 Grady’s had six restaurants that were averaging just under $4 million per unit. The culture and guest care were second to none. No task was too great. Grady’s general managers even hoped it would rain so they could walk guests to their cars using company umbrellas. The chain was attracting the attention of the restaurant industry’s major players, and in 1989, Brinker International decided to make Grady’s its first acquisition.

During the same period, the focus on scratch cooking and premium ingredients was diminished.

Soon servers could no longer go to the table and say with pride, “Everything is made from scratch in the back!”

Customers were confused, and the employees were demoralized. From the $4.0 million level at acquisition, average sales per restaurant fell to about $2.4 million by 1995. Brinker gave up and offered to sell Grady's. Out of 52 units, 10 were closed and 42 were sold. Shortly thereafter, Grady’s didn’t exist.

The moral from the Grady’s tragedy may be: Appreciate the power of a culture and concept that delights guests and employees. The silver lining is that Grady’s created a golden generation of restaurateurs that include Mike Connor of The Chop House and Connors Steak and Seafood, as well as Rick Federico, former P.F. Chang’s CEO and chairman.

A solid and inspiring foundation is the reason a concept is greenlit for growth. Yes, fat is an inevitable part of growth that requires constant trimming. But be wary of discussions, well intentioned, aimed at maintaining profits when sales flatten or begin sliding but that undermine the original concept. When contemplating a strategy to regain profitability, results from sales-building initiatives are too often seen as uncertain, while cost cuts generate more predictable short-term results. However well-meaning, these short-term actions can threaten long-term viability.  Being a pickpocket on the Titanic is seldom a winning strategy versus initiating analysis into the reasons that traffic has declined.

As always, guests are dining out - only now, someplace else.

All the while, down the street or around the corner, Houston’s, In-N-Out, and Chick-fil-A discuss food quality, employee advancement, and pleasing guests. These operators are obsessed with the guest experience and separate the process of pleasing the guest from the result of cash-on-cash returns. Pants first, then shoes.

Step 1 is to turn back the clock to a time when guests flocked to the restaurants. Step 2 is to make sure a guest’s advocate is in the boardroom. What did we do when we felt the love from our guest? Step 3 is to think like a founder. Was there ever a great founder who launched a burger concept with pink slime as an ingredient? Great operators grow brands and fight with boards and owners over things like the nuanced flavor created by combining fresh ground chuck and brisket. Who in a restaurant organization lives for training a team on the guest “welcome” or “thank you,” or finding the opportunities to display acts of kindness above and beyond the prescribed sequence of service, such as helping a guest with their bags?

Institute a culture where cooks and managers look out a cracked kitchen door to see the guest’s reaction when they taste the biscuits. Hide a cookie in the guest’s to-go bag like an Easter egg. Remember when the guest was our friend and not just a contributor to traffic count. For all multi-unit concepts, there was a day when

The answer is obvious but not simple – fight the gravity that seeks to diminish, while rekindling the passion for delighting your guests.

Lane Cardwell is the former president of P.F. Chang’s China Bistro and is currently president at Cardwell Hospitality Advisory. He has also been CEO at Eatzi’s and Boston Market, executive vice president and chief administrative officer at Brinker International and interim CEO at Ruby Tuesday.  Kep Sweeney is a Director at CR3 Partners.