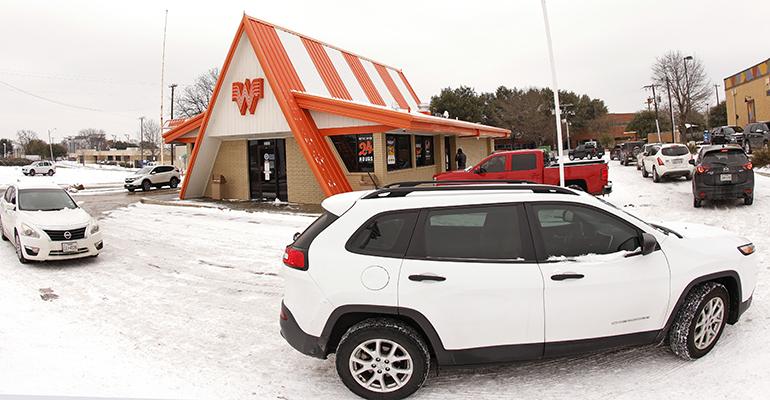 Texas restaurant operators Thursday were beginning to emerge from the tire- and head-spinning five-day ordeal with winter.

Along with residents, restaurateurs first dealt with icy temperatures, blowing snow and widespread power outages as the electricity distribution grid nearly fell apart in the storm that began Sunday. Now they are dealing with bursting frozen pipes, boil-water orders, spoilage and a constipated supply chain.

Tinku Saini, CEO and co-founder of Tarka, which has locations in Austin, Houston and San Antonio, closed Sunday when the winter storm began.

“At first, it was an issue with electricity,” Saini said. “None of our locations had power; all of them were restored yesterday [Wednesday] evening.”

But Tarka is facing water issues on Thursday as temperatures in the state began to rise near freezing.

“We are planning and hoping that we can open in Houston today for dinner, but that is contingent upon access and availability to water,” Saini said. “Now we’ve transitioned to working through the water challenges – access to water, low water pressure and boil-water notices in some areas.”

A number of municipalities, facing low water pressure and treatment plant power outages, sent out boil-water notices, fearing for the safety of the water supply.

“Then we are navigating the obstacles with suppliers as they determine the safest way to deliver our products,” Saini said in an email. “Finally, the team: You have to figure out what is in the best interest of the guest and employees – how safe is for them to drive to the store. Their safety will always be our biggest priority as it has been for the past year.”

Spoilage was also emerging as a problem on Thursday.

“At Tarka, we make a lot of our food fresh to order,” Saini said. “We chop veggies and prep proteins so that we can customize dishes for guest’s needs. Unfortunately, a large portion of our product (produce and protein) has expired, so we’ll have to discard it.”

Velvet Taco, which has 16 units in Texas, was also facing power and water issues and some units remained closed on Thursday.

Clay Dover, Velvet Taco president, said only one of four units in Houston was open.

“All are impacted and have been closed the last several days,” Dover said in an email, adding that a couple of restaurants had “burst pipes we are repairing.”

Suppliers were a challenge, with some roads still impassable, and many were not delivering until Friday, he said.

Bill Bayne, CEO and co-founder of Fish City Grill and Half Shells Seafood, said only one store out of 20 was open on Thursday, and that one was in Lakeland, Fla.

“All other stores either had no power or we chose to close for team member safety,” he said. The storm fell on two big holidays, Valentine’s Day on Sunday and Mardi Gras on Tuesday.

“Those are two of our biggest sales days,” he said, and the brands plan to provide make-up holiday promotions next week.

“We don’t know how much of our menu items will be available,” he said, “And it will differ from store to store. It will be almost impossible to offer accurate menu selections to third-party customers. We are turning third-party [platforms] off for today, anyway.”

Unique to Fish City was the polar vortex’s impact on crawfish, which is highlighted on the menus during the season.

“We would normally be getting into crawfish season full swing,” he said. “But the ponds in Louisiana have frozen. That can, at worst, kill the crawfish. And at best, if they do survive, they don’t eat while it’s so cold and they don’t swim into the traps. There is very little to harvest at this time – but they do appear to have survived.”

His brands were responding on the marketing side by sending daily emails and making social-media posts to keep customers informed of what stores were opened and closed.

Annie Spilman, Texas director of the National Federation of Independent Business, issued a statement, saying the storm couldn't have come at a worse time for small businesses,

"The pandemic has already taken a tremendous toll on employers throughout the state," Spilman said. "Now, they're facing additional losses from the sudden loss of traffic and damage from burst water pipes and, in the case of restaurants, surplus supplies that are quickly going out of date."

Todd Madlener, president of Coolgreens, said that brand’s three restaurants in Dallas had not opened all week and two of those would not open until this coming Monday. “None of our existing inventory is usable,” Madlener said.

Jack Gibbons, CEO of Dallas-based FB Society, which owns the nine-unit Whiskey Cake, four-unit Sixty Vines, the three-unit Ida Claire and the two-unit Mexican Sugar, among other concepts, said the company’s network of vendors was working hard to deliver, but those deliveries were slow.

“Many side roads have melted and then frozen again overnight making driving conditions in some areas dangerous,” Gibbons said. “We’re less concerned about deliveries and more concerned about being good partners and ensuring the safety of their teams.  We will open several restaurants today with limited menus and likely run with limited menus for the next few days.  We had an abundant supply of many items, expecting large turn out on Valentine’s and we’re working to feed our communities as many grocery stores are now bare.”

Laura Rea Dickey, CEO of Dickey’s Barbecue, said the brand was experiencing distribution issues across Texas “because of both warehouse power outages and road delays.”

“We’re doing everything we can to stay open at one of our primary corporate hubs off of Wycliff in Dallas,” Dickey said. “We’re going directly to our supplier to pick-up food supplies and packaging items in order to continue serving guests in the area. We’re even offering hot links, which are normally not available on the men, as means to provide anyone who is food insecure a warm plate of food.

“We’ve seen lines wrapped around our Wycliff location as many folks are coming in and telling us that grocery stores are all but empty and we have many others who are thankful just to have a hot meal as they go onto their third day without electricity at home,” she said.