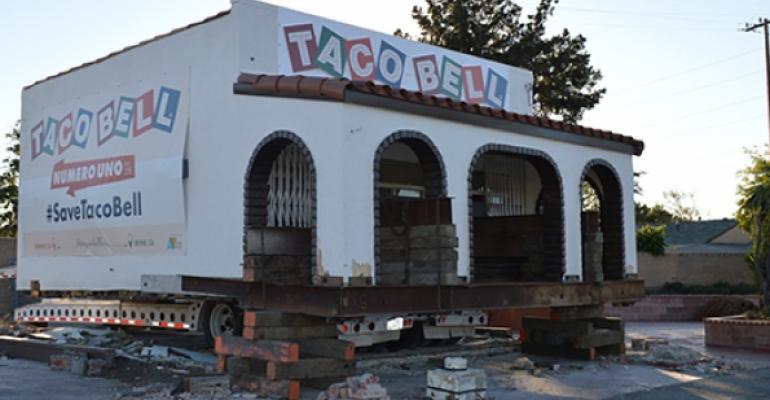 <p>Taco Bell is saving its original restaurant from demolition by lifting it from its foundation in Downey, Calif. and moving it 45 miles across Southern California to Irvine, where the chain is based.</p>
Operations

Taco Bell to save original restaurant from wrecking ball

Restaurant Numero Uno will be trucked to chain headquarters

Taco Bell will save its original restaurant from demolition by loading it onto a truck and moving it to the company’s headquarters campus on Thursday.

Fans of the 53-year-old brand can watch the proceedings via social media as the company lifts the restaurant, dubbed “Numero Uno,” from its foundation in Downey, Calif., and moves it 45 miles across Southern California to Irvine, where the chain is based.

The 400-square-foot restaurant with a walk-up window was opened in 1962 by Glen Bell, the concept’s founder. Although it closed as a Taco Bell in 1986 and has since been home to other taco concepts, the company said it couldn’t let it end with a wrecking ball.

“This is arguably the most important restaurant in our company’s history,” Brian Niccol, Taco Bell Corp. CEO, said in a statement. “To think a business like ours that spans 6,000 restaurants around the globe started with a walk-up window no bigger than a two-car garage is truly inspirational. When we heard about the chance of it being demolished, we had to step in. We owe that to our fans; we owe that to Glen Bell.”

Since learning of the planned demolition from the Downey Conservancy, Taco Bell has attempted to drum up support for saving the restaurant on social media with the hashtag #SaveTacoBell. That hashtag can also be used by fans to watch the move on Thursday.

Once it arrives at its future home in Irvine, Taco Bell plans to keep the 20-by-20-foot unit in storage until it decides what to do with it.