ElectraMeccanica debuted its Solo Cargo EV, a delivery-ready, three-wheeled electric vehicle that drives like a car but produces zero emissions. The solo has a range of about 100 miles and can go up to 80 miles an hour. It’s classified as a motorcycle but does not require a motorcycle license.

The Solo has a 12-cubic-foot cargo hold that can be modified with a warming element. For the driver, the one-seat vehicle has air conditioning and heat, Bluetooth, a back-up camera and even a cupholder. It can be charged with either a 110-volt outlet (overnight) or a 220 (in 2-3 hours). It’s priced at  $24,500 for the delivery model.

Justin Hazelton, fleet sales consultant at the show, said, “We see ourselves in a very underserved niche, which is micromobility and sedans, and we are right in between those two things. You don’t need four empty seats (in a car) to deliver a pizza.”

Sea Briganti, CEO and founder of Loliware, recently launched a new technology that transforms ocean-farmed seaweed into pellets that can replace plastic at scale.

Loliware is working with a former plastic manufacturer in Missouri that has produced a straw made of seaweed that is backyard compostable and has no PFAS or toxins. “It’s so safe, you can eat it,” she said. “It’s just seaweed and FDA approved food coloring.”

The pellets can be manufactured into materials using the same process as plastic on the same equipment, though with less energy because the pellets melt at a lower temperature. Loliware is scheduled to have a line of seaweed-based cutlery this fall, and expanding from there.

“We fight climate change in two key ways,” said Briganti. “By supporting the seaweed economy that captures carbon from the ocean and the atmosphere, and it replaces plastic, which is avoided emissions.”

This Chicago-based company has been exhibiting since 2014, but Open Water is expanding its line of aluminum water bottles and cans, in still and sparkling options, as an alternative to plastic water bottles.

The bottles and cans are made of recycled material and they can be recycled again. Aluminum is recycled at a higher rate because there is more of a market for that material. The company is woman- and LGBT-owned and it is climate neutral in that emissions from manufacturing through delivery are offset by investment in projects that remove carbon from the atmosphere.

This is a distributor of hydroponic growing systems for restaurants that want to grow their own herbs, lettuce and certain vegetables in house.

Several types of systems were exhibited, from one small enough for a countertop to a floor-to-ceiling stack.

There’s no soil to contend with, and the operator just needs water and a source of electricity to grow year-round. A “brain” handles the delivery of nutrients and light cycles to the plants, so there’s little management. And the resulting herbs and produce are, of course, organic.

The larger plant-based protein players for the most part are using pea protein or soy as the base ingredient for their meat-like options.

A growing number of smaller brands are emerging that tap the strengths of other plants. Willaroos was showing off its sausage and pepperoni made with jackfruit. The fruit comes from Southeast Asia and is manufactured in the U.K. The company has a line of products in the U.K. and companies like Papa Johns are using the pepperoni there, for example. But Willaroos just started offering its products in the U.S. about a month ago.

When asked how they see their competition in the U.S., Simon Fenson, head of sales, said he welcomes the variety available.

“We think plant-based options should be as wide and varied as meat options,” he said.

Exhibiting for the first time is Cutting Vedge, a line of artichoke-based products from Reese, one of the largest artichoke producers.

Sales rep John Haering was demonstrating Cutting Vedge patties, crumbles, sausages and meatballs, all of which are 35% to 40% artichokes, mixed with quinoa and spinach. They have no soy or wheat, and are gluten free.

Not really designed to mimic meat, these are likely to win over diners who love the taste of artichokes (like me). 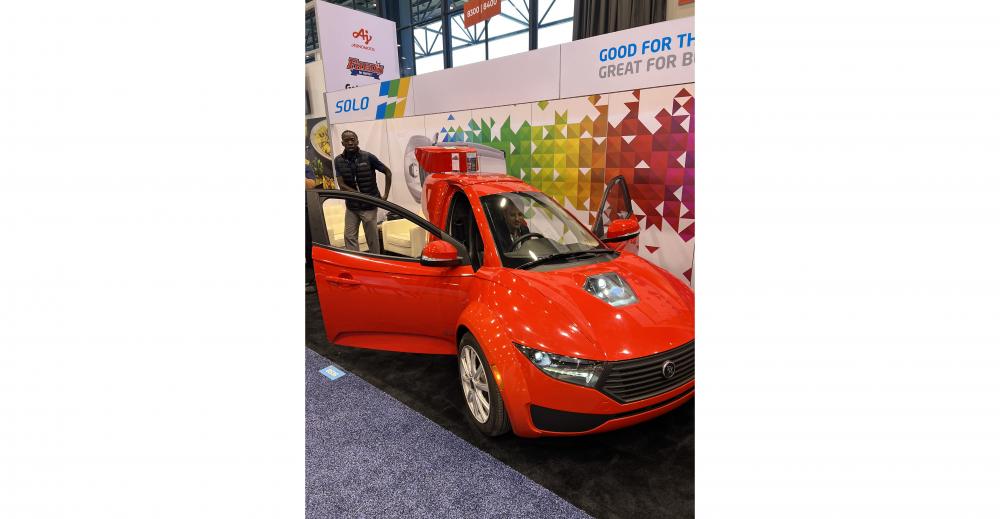