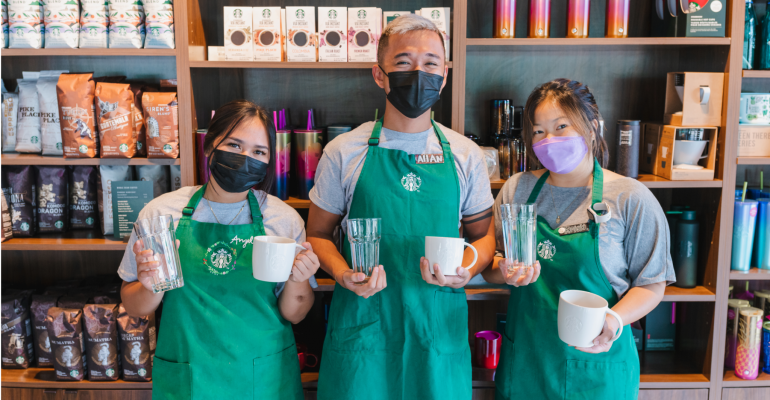 Starbucks
Starbucks is testing various methods to encourage guests to choose reusable cups — and give up use of disposables.
Operations

Starbucks wants to move away from disposable cups

Starbucks is hoping guests will adopt a culture that moves away from disposable cups — and toward the use of reusables — by 2025.

With Earth Day approaching next month, the Seattle-based chain on Tuesday outlined its journey toward cutting the amount of waste its coffeehouses produce in half by 2030. That effort includes a move toward reusable cups in various forms, but also finding a more-sustainable disposable option, and helping to support a recycling infrastructure that will result in less waste being sent to landfills.

Last year, the Seattle-based chain began allowing guests to bring their own reusable cups again, with team members trained to follow contactless handling measures. During the pandemic, the chain had temporarily halted the program in light of COVID safety protocols.

Now, Starbucks is expanding the reusable-cup program, and testing systems that will make the process easier and more convenient for guests.

By the end of 2023, customers will be able to use their personal reusable cups at every Starbucks across the U.S. and Canada, including in café, drive-thru and for mobile orders, the company said. At a unit near Arizona State University and in cafes in Hawaii, Starbucks is testing new cup-washing stations, so guests can have their personal cups cleaned before ordering.

In the past, the chain has offered a 10-cent discount to guests who bring their own cup, but now the chain is testing a discount up to 50 cents. And in Germany and the UK, Starbucks is charging guests a paper-cup fee for disposables to encourage use of reusables.

The company is also continuing to test the “Borrow-a-Cup” rental service in which guests pay a dollar deposit for a reusable cup, which is paid back when the cup is returned — and subsequently sanitized and reused.  That test has expanded to the United Kingdom, Japan and Singapore, with more countries to be added this year, Starbucks said.

In addition, guests who consume beverages on site are encouraged to use “for-here ware,” ceramic washable cups that further reduce reliance on disposables.

“We have a bold long-term sustainability vision and ambitious goals for 2030,” said Kevin Johnson, Starbucks’ president and CEO, in a statement. “Starbucks partners around the world are passionate about protecting our planet and are at the very center of driving the innovation that enables us to give more than we take from the planet.”

In some units, Starbucks has eliminated single-use cups entirely, relying solely on reusables, personal cups and for-here-ware. Tested at four stores in Jeju, South Korea, the company estimates 200,000 cups were diverted from landfills as a result. The test was expanded to another 12 locations in Seoul.

At the company’s Starbucks unit within its Seattle headquarters, all beverages are served in reusable cups. Team members can bring their own or use the borrow-a-cup system, returning used cups at kiosks placed around the office campus.

Starbucks is also launching a new app, which was developed by coffeehouse partners, to help navigate the unique recycling guidelines for each store. The app features store-specific information and notifications about what can be recycled and how, with options for creating signage for partners and customers.

The app was an idea that came out of an employee competition seeking innovations for creating greener stores, following Johnson’s philosophy of moving from “idea to action in 100 days.”

In another move, Starbucks said it will increase the recycled content of its disposable cups, starting this fall, to reduce reliance on virgin materials.

By the end of 2024, all U.S. units will offer the improved disposable cup. And, by the end of 2022, all per- and polyfluoroalkyl substances — or “forever chemicals” known as PFAS — will be eliminated from packaging in the U.S., and globally by 2023, the company pledged. PFAS have been identified as potentially toxic and can seep into waterways and soil.

The 34,000-unit chain is also working to reduce its carbon footprint and expand its use of renewable energy.

Under a new pilot program with the car brand Volvo, Starbucks is installing ChargePoint-powered electric car fast chargers in a string of 15 stores along a 1,350-mile route, from the Colorado Rockies to the support center in Seattle — roughly one every 100 miles or so.

The company is also moving more stores to solar power, expanding that pilot to 55 new units this year.

CORRECTION: This article has been updated with a clarification from Starbucks.