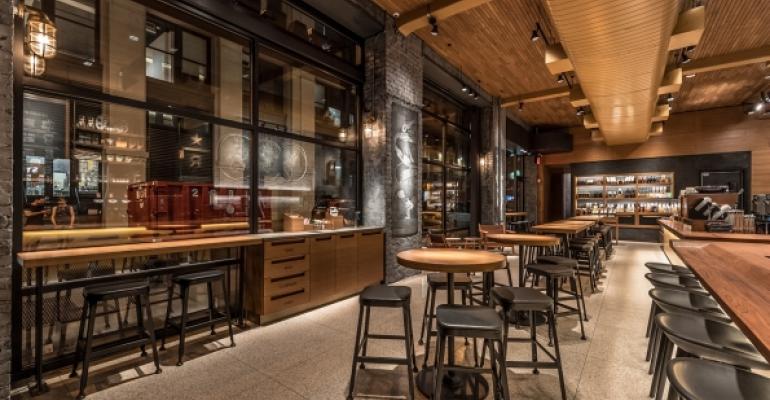 <p>The traditional Starbucks store is being upgraded, as in this one at 10 Waverly Place in New York City. Photos courtesy of Starbucks</p>
Operations

At Starbuck’s biennial investor conference in New York City, CEO Howard Schultz outlined why the company, now at 25,000 locations globally, has strengthened its position for the “long game” and plans to add 12,000 locations by 2021.

Schultz, who announced Dec. 1 that he would retire as CEO in April and be succeeded by president and chief operating offering Kevin Johnson, said retail and restaurants are at a critical juncture.

“I would submit, as I have for the last couple of years, that we’re going to see a very major downturn in the fact that the country is ‘over-retailed’ in lots of categories,” Schultz told investors. The glut of retail, he said, is leading to slowdown in growth among many brick-and-mortar brands and closures of stores.

In the past three years, Starbucks has invested “ahead of that curve in all things mobile” and has seen success with what he called the “digital flywheel.”

“Every brick-and-mortar retailer will have to establish a leading position in being able to integrate technology,” he said, adding that they would no longer be able to depend on intercepting traffic and would have to become a destination. The future of premium concepts

Schultz, who will be Starbucks executive chairman after the management change in April, will focus on the premium Roastery and Starbucks Reserve stores, which he said will offer a higher level of design and service.

The two-year-old Roastery concept elevates the brand with more brewing methods, more intimacy with customer and more design theater, Schultz said, creating an experience that was a “magical carpet ride” for the consumers. The Roastery also has an average ticket that is four times larger than an average Starbucks store, he said, and could create a new source of growth and revenue for the company.

Schultz estimates the Starbucks portfolio would include 20 to 30 “grand” Roasteries globally. A Roastery will open next year in Shanghai that is twice the size of the original, he said, and a similar-sized New York Roastery is scheduled to open in a year and a half near Chelsea Market. The New York location will include a bar for spirits and mixed drinks as well as most likely be open 24 hours, Schultz said.

The Starbucks Reserve stores will be smaller, covering about 3,000 to 4,000 square feet, borrowing artisanal food preparation from Princi, the Italian bakery and café concept in which Starbucks invested in July. The first of the new Starbucks Reserve stores will open in Seattle and Chicago in the second half of fiscal 2017. The company expects to have the Reserve bars in as many as 20 percent of its locations by 2021.

The Roastery and Reserve stores will also serve as innovation-pipeline stores for the rest of the system and serve as a “halo” for all the Starbucks stores, executives said.

At the end of the six-hour presentation, Schultz said, “Although we have great real estate and great design, the foundation of the company has been — and continues to be — the relationship we have with our people.

“The currency of building a great, enduring company today,” he continued, “has to be  trust: trust that you are building with your people, [trust] that they are building with the customer and the communities that we serve.”