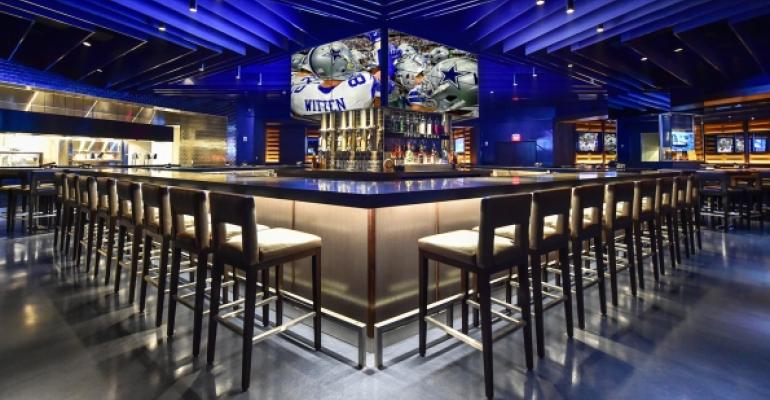 Fans and visitors to AT&T Stadium in Arlington, Texas, home to the Dallas Cowboys professional football team, now have the option of finer dining.

On Monday, a new 19,000-square-foot, 650-seat Stadium Club restaurant opened to the public for lunch and dinner on non-game days. On game days, the restaurant will be closed to everyone except members-only season ticket holders and suite owners.

"This is our first public snapshot of what we demand as culinary presence here," said Anthony Sinese, executive chef at AT&T Stadium with Legends hospitality. "This is seven years in the making, so we’re pretty excited about this."

The Stadium Club is operated by Legends, the sports and entertainment company owned by the New York Yankees and the Dallas Cowboys. Legends operates concessions in other stadiums, as well as a number of venues, such as One World Observatory at One World Trade Center in New York City, and the observation deck at the US Bank Tower in Los Angeles.

The restaurant will be open daily from 11 a.m. to midnight, serving a variety of shareable appetizers, sides, soups, salads, burgers, sandwiches and flatbreads. The bar will serve beers and barrel-aged cocktails.

"We’re showcasing a lot of items that take advantage of what they have here, such as a big smoker on site," said Anthony Van Camp, Stadium Club executive chef and former chef at such fine-dining Dallas restaurants as SĒR Steak + Spirits at the Hilton Anatole Hotel and its predecessor, Nana. “Fan can come in here and relax before or after a tour of the stadium.” Stadium Club menu items range from chicken wings and chicken-fried quail to brisket cheesesteaks and mesquite-grilled ribeye steak with tomato chutney.  Appetizers start at $7, and the steak is priced at $45.

"We think this is a better, neater and more complete Stadium Club," said Stephen Jones, chief operating officer of the Dallas Cowboys, referencing the storied Stadium Club at the team’s old Texas Stadium in Irving, Texas. The Cowboys moved to the new stadium in 2009. “We think our fans will really enjoy,” Jones said at a preview of the new restaurant.

The Stadium Club has 20 flat-screen televisions throughout the restaurant, as well as a video wall behind the host stand.  It occupies space next to the Cowboy’s Pro Shop that had once been considered for a Hall of Fame, which has since been created at the team’s headquarters building. Mementos such as footballs and awards are featured in glass cases throughout the restaurant.

Greg Merkel, project design director from the New York-based firm iCrave, said the Stadium Club’s design elements, which feature a sculptural five-point star in the ceiling motif, was inspired by “the Cowboys and what they stand for.”

"Our goal for this project, in all honesty, was to not mess it up," Merkel said at the restaurant preview. "Our goal was to design a space that was bold and beautiful and striking."