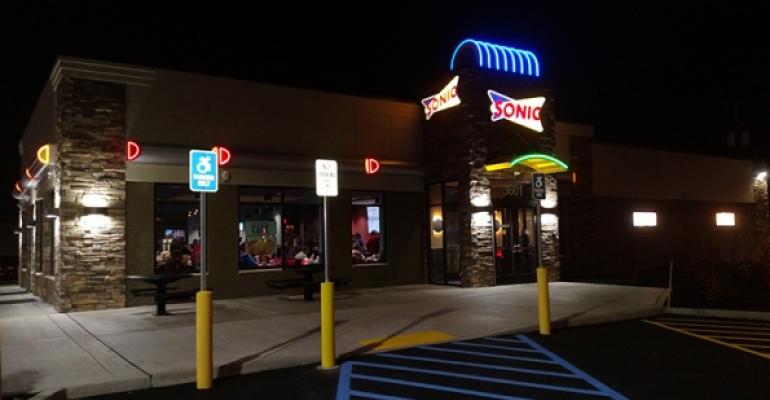 Sonic Corp. has ramped up its conversions of other commercial locations in the past year, taking advantage of both time and money savings and the ability to get high-traffic locations.

“You can have lower investment cost and a faster construction cycle,” Ritger said.

Conversions can shave as much as 120 days off a typical Sonic unit’s six-to-eight-month development schedule, as well as save as much as 40 percent or more on the cost, he explained.

The conversions have been especially useful in the expensive real estate markets of California and the Northeast, he said.

“As we expand, we found there was an opportunity to repurpose other restaurant locations,” Ritger said. “Many times, they are on great real estate, but they had run into some conditions like the operator of the other concept got into some financial trouble or the license term or contract had ended and weren’t renewed.”

In California, Sonic has repurposed Burger King and Wendy’s restaurants. In New York, it has reconfigured former Wendy’s and Perkins Restaurant & Bakery locations. In New Jersey and New York, it has remodeled former bank buildings. And it has converted a Wendy’s unit in South Carolina and a KFC location in Cleveland.

Conversions offer a number of advantages, Ritger said. “Most of the locations already have the right conditional-use and drive-thru permits,” he said. “These are things that save the franchisee time and money.”

The largest restaurant in Sonic’s system is now in Cheektowaga, N.Y., a suburb of Buffalo, which opened on Nov. 5 in a converted Perkins location. It covers 5,000 square feet and seats about 80 people, and business has been brisk since the opening, Ritger said. The larger dining rooms can also provide Sonic’s signature roller-skating waiter service, he said.

Conversions allow Sonic to add patios, parking stalls and dining rooms in some areas, as well as let the brand make regional modifications. Several repurposed restaurants in California, for example, have garage-style doors so the dining room can be opened to the patio in temperate weather, he said.

“It can really speed the time it takes to go from concept to opening on project,” Ritger said. In addition, franchisees can see savings in soft costs in architectural in engineering planning, as well as in legal fees for licenses and permits.

“What we normally do is take the shell of the building, and then we convert it to our kitchen layout,” Ritger said. “Our kitchen designs can be put into just about every concept. Occasionally we have extra space for employee lockers or meeting rooms. “

The conversion format began about two years in Childress, Texas, he said, and continues “if we get a good opportunity in any location.”

Other states that have seen Sonic repurpose other restaurant locations include Alabama, Connecticut, Florida and Rhode Island. “It depends on what the opportunity is and if the franchisee believes its good real estate and a good business opportunity,” Ritger said.

The ramped up conversions also allow franchisees to accommodate increasing real estate costs, he said. “With the real estate market having a significant recovery since 2009 and 2010, conversions have offered a nice opportunity to purchase or lease real estate,” Ritger said. “Post-recession, there are number of opportunities that have come up.”

Cost savings depend significantly on site inspections, he added, and some sites will not fit into the economic model. “You have to do very good due diligence on your site inspection by your engineering and construction team, with the franchisee,” he said.