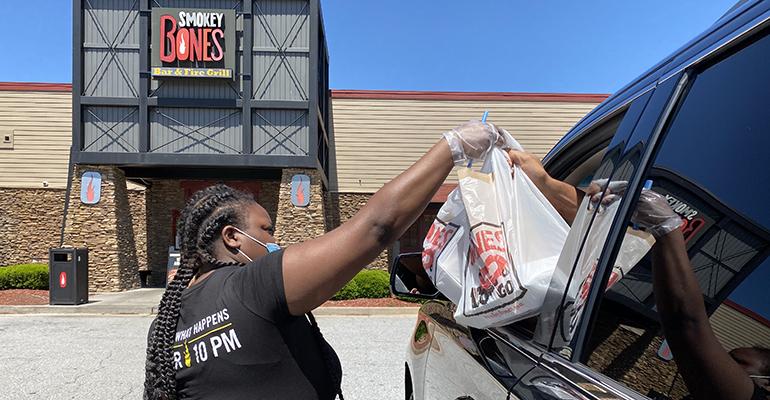 At three Smokey Bones restaurants in Georgia, both servers and kitchen line workers now wear face masks. Tables are spaced at least six feet part, and only 10 guests per 500-square-feet of space are permitted at one time in each restaurant. The limited food options are printed on disposable menus for one-time use, and utensils are disposable and come to the table pre-packaged.

At an Applebee’s in Tennessee, restaurant workers wear masks and gloves. Guests were directed in the parking lot to avoid congregating, and the chain planned to allow customers to order and pay on their own mobile devices.

At Chili’s in Texas, workers are checked for fever and quizzed about possible exposure to coronavirus before shifts.

This, at least for the near future, is expected to be the new operational normal as states phase in their back-to-business plans for full-service restaurant dining.

Many restaurant operators across the industry argued that the states that lifted restrictions at the end of April — including Alaska, Georgia and Tennessee — did so too soon and were potentially putting their workers and guests in harm’s way.

Hugh Acheson, for example, who operates the restaurants 5&10 in Athens, Ga., and Empire State South and By George in Atlanta, was one of many who held back as the governor of Georgia lifted restrictions there.

In the early weeks, Acheson, left, argued that customers weren’t ready to dine out. But the potential to open put people who needed the money in a tough spot, he said.

Still, most states that eased restrictions also issued specific guidelines for restaurants to limit spread of the virus, though those guidelines varied somewhat by state. In some states, capacity was limited to 50% for dine in, while others set the bar at 25% to 30%.

In Texas, for example, restaurants were allowed to begin offering dine-in on May 1, but they were limited to 25% capacity, parties had to be limited to six or less. In Oklahoma, workers and vendors had to be screened for symptoms, including temperature. In Nebraska, salad bars were banned and guests could not sit at the bar. In Arkansas, bar areas within restaurants had to stay closed.

In some cases, those mandates were not revealed until 24 to 48 hours before dine-in service was officially allowed, making it harder for operators to prepare and train staff.

John Metz, CEO of the 23-unit Marlow’s Tavern, based in Atlanta, started opening restaurants for dine-in at the end of April in Georgia.

Arguing the restaurants that returned to dine-in first had a responsibility to demonstrate how it can be done safely, Metz said the restaurants installed a new air filtration system hooked up to the HVAC, as well as sanitation stations throughout the restaurant for both guest and team members to clean their hands, and plexiglass barriers between booths. 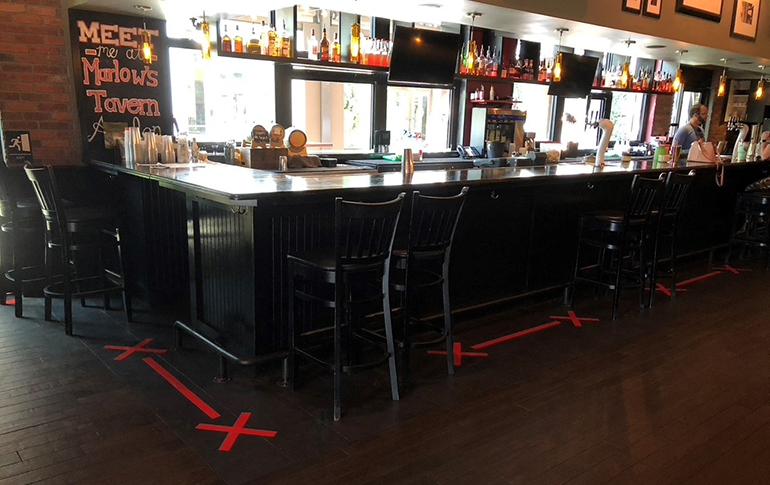 Social distancing markers at the bar at Marlow's Tavern.

A key factor was controlling the flow into the front door to minimize guest contact with other people, he said. From a table out front, a manager encouraged guests to wait in their car or walk the neighborhood, rather than wait in line. Pickup/takeout service was handled on a patio, so guests didn’t have to encounter dine-in guests.

Rather than ask servers to help bus tables, as was the practice pre-COVID, Metz brought in more bussers to clear tables and ensure sanitation between each guest visit. “It takes a couple of minutes to do what we’re doing, which is sanitizing booth backs, table tops, etc., to make sure everyone feels completely comfortable,” he said.

Metz said Marlow’s also switched temporarily to a team-service approach, upping server pay to above minimum wage with tip pooling, at least for the first month. A goal was to minimize contact between guest and server — for now.

Similarly, Chris Simms, CEO of Lazy Dog Restaurants based in Costa Mesa, Calif., said the restaurants that began to open for dine-in in early May were trying to strike the right balance between safety and hospitality.

“As we are making sanitation this No. 1 priority, we’re also trying to balance it with the guest experience,” he said. 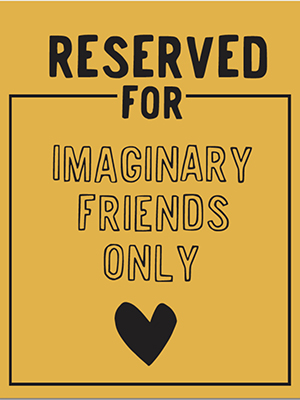 Photo: Tables are reserved "for imaginary friends" as a way of distancing customers at tables.

In addition, he said Lazy Dog will use a reservation system for the first time to better stagger guests for the limited capacity. Team members will also be scheduled in cohorts so the same people will work together, which at least limits exposure to a more controlled group.

Even as restaurants struggle to put in place guidelines that will govern operations for the months to come, looming on the horizon is the potential for a spike in coronavirus cases that could result in another shutdown.

But another spike in cases will come under vastly different circumstances, said Christine Barone, CEO of Phoenix-based True Food Kitchen, which opened some restaurants for “limited socially distant” dine-in in May. There will be therapeutic measures identified by then, she argued, and more will be known about the way the virus works.

“We’ve gotten better about planning for the unknown,” she said. “And we’re going to get smarter and smarter about who this impacts and how this is transmitted. And as restaurateurs, we’re going to react to that and we’re going to continue to make our destinations awesome places and have the right scientific approach to what’s going on out there.”

Even as they welcome dine-in guests back, many restaurant operators said they intend to continue their emphasis on off-premise service, in part because they expect consumers to be nervous about public spaces, but also because they have become a positive revenue stream.

Smokey Bones, for example, created two virtual brands — wings and burgers — available for delivery both out of the barbecue chain’s existing restaurant kitchens, and also out of Kitchen United in Chicago, a ghost kitchen facility.

The chain had begun investing in off-premise before the crisis, but the arrival of coronavirus cemented the move as a growth priority, said James O’Reilly, Smokey Bones’ CEO.

“When this crisis hit and off-premise became our only business, we leaned in on that strategy even harder. We’ve learned a lot from doing that. We’ve developed some new ideas, some new approaches that we will continue, not only as we reopen, but for the foreseeable future,” said O’Reilly. “As we look at the way restaurant brands are being distributed, it’s not just about the brick and mortar industry anymore.”