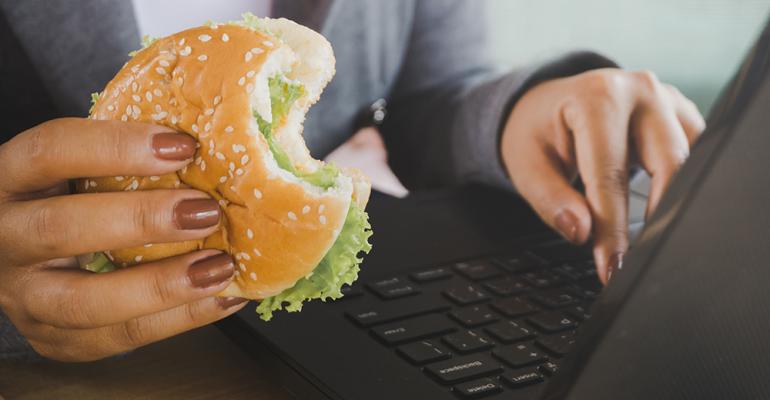 Should companies have a say in what employees eat?

Put down that burger, Bret, because I’d like to get your opinion on employers who have turned that same directive into a corporate policy.

New York City-based WeWork, which has built its business around shared workspaces, announced this summer its decision to eliminate all red meat and poultry from corporate dining functions. What’s more, the company refuses to reimburse employees who order meat when dining out for business.

In discussing the ban, WeWork’s co-founder Miguel McKelvey said that it was driven by concerns for the environment and animal welfare. He went on to explain that it’s all about “mindfulness” and “awareness” and developing “personal accountability in our team.”

I didn’t know that my personal accountability could be developed by someone other than myself, but that’s a question for another time.

What WeWork has in fact developed is a business very much in tune with the times: The company realizes an estimated $20 billion in revenue by refurbishing and renting space to individuals and companies in 178 locations in 56 cities in 18 countries. Last September, according to The Wall Street Journal, it became Manhattan’s biggest holder of real estate, displacing JPMorgan Chase from the top spot.

Talk about a contrast of corporate cultures: WeWork transforms old spaces like New York’s iconic Lord & Taylor department store into groovy, tech-friendly environments complete with complimentary micro-roasted coffees, fruit waters, living plant walls, arcade games and reclaimed architectural elements. It’s all too cool for school, an environment in which the renters’ smart phones will give them intel on, say, the last time the air filters in their space were changed. In an amusing throwback, the company has also installed 12,000 phone booths that allow for private phone conversations in its digital dens.

Anyway, no sooner was the meat ban made public than the pundits pounced, pronouncing it a “whimsical human resources directive,” “a branding exercise wrapped in environmental responsibility” and a “perfect case study in virtue signaling.” I absolutely love this last phrase, which suggests that the ban may be as much about shoring up company cred with Millennials as it is about the environment. Restaurateurs have been virtue signaling all over the place the past few years, from McDonald’s switch to fresh beef in its Quarter Pounders to Starbucks recyclable coffee cups to plastic-straw bans by chains too numerous to mention.

Leaving aside comic images of clandestine burger noshes in the dead of night and covert chicken-tender exchanges in those phone booths, there are some more serious questions here regarding the imposition of corporate values on the people in its employ. It’s not a new issue. Big companies have worked for years on schemes to disincentivize smoking, for example, either by withholding or up-charging for medical insurance. Some have sought to impose their religious or political beliefs on their workforce. But as The New York Times notes, WeWork is “really the first big company to tell its employees what they can and can’t eat.”

It’s important to note, Bret, that WeWork offers exemptions to workers with special dietary or religious needs; they are referred to the company’s policy team to discuss their options. Similarly, renters of WeWork spaces can’t be held to the rules that govern the company’s 6,000 employees, though they will have to live without organic turkey jerky in the on-site Honesty Markets, or self-serve food and drink kiosks. And soon, they may also have to forgo seafood, eggs, dairy and alcohol, all of which the company is reportedly evaluating for elimination.

The net result is that men and women who work for WeWork will be teetotalling vegetarians when they’re on the job.  Okay, but will they be happy about it? Would you, Bret? And how do you view WeWork’s initiatives: Are they a step forward in corporate consciousness or a misguided example of corporate coercion?

Nancy, I read your column and immediately ordered a double SmokeShack from the Shake Shack across the street from our office.

Because I’m a rebel — a small rebel making not particularly bold statements that are, ultimately, inconsequential. I did enjoy that burger, though.

WeWork is clearly making a statement, too — virtue signaling, indeed. It’s in line with a lot of vegetarian proselytizing and also in line with the office-sharing company’s own messaging.

Less than two months after telling its employees that their chicken Caesars wouldn’t be reimbursed, WeWork committed to being carbon neutral by 2023, and to removing “major single-use plastics” — cups, straws, utensils etc. — from its buildings by the end of 2018.

In announcing these initiatives, co-founder McKelvey, who is also the company’s chief culture officer (because of course he is), wrote: “At WeWork, we believe culture is an output of action and intent. Whether through our commitment to being a meat-free organization, phasing out our use of disposable plastics and leather furniture, or pledging to be carbon-neutral by 2023, being responsible global citizens is a critical pillar of our culture as a company and a community. As we continue to grow, we are building upon the power of our global community — employees, members, partners — to have the greatest possible impact.”

On one hand, WeWork is a glorified office landlord and maybe should get over itself.

But on the other hand, corporate responsibility is serious. Customers, especially younger ones, but also mavericks like my 81-year-old mother, want to do business with companies that align with their moral values.

That is certainly true at chain restaurants: Many of the fastest growing ones, like Jersey Mike’s Subs and MOD Pizza, have as part of their corporate culture strong messages of social responsibility and community involvement. I don’t think the relationship between their business success and their corporate philosophy is coincidental.

I don’t really feel like arguing about whether eating meat is a morally superior state of existence. Many vegetarians I know certainly think so, even the ones too polite to say it to my face, and so, it seems, do many others.

As you know, the percentage of Americans who are vegetarian is small, but it has eked out a couple more percentage points over the past couple of decades to around 6 percent (depending on who you ask), and last year consumer and market research firm Nielsen reported that 39 percent of Americans were actively trying to incorporate more plant-based foods into their diets.

Of course that’s still a minority of Americans, but I bet if you narrowed that focus to urban professionals working in shared office spaces, the percentage of vegetarian-friendly people would go up considerably.

So WeWork’s efforts are probably on-message with its client base, and its statements are bold enough that here we are talking about them four months after they were made. Not only that, but as Manhattan’s biggest real estate holder, their actions hold considerable weight.

But we’re talking about what people eat, which is just about as intimate a way to interfere in an employee’s life as it gets. (I can think of only one company that goes farther: Hobby Lobby, which refuses on religious grounds to provide insurance that pays for its workers’ birth control).

To answer your question about being a teetotalling vegetarian, Nancy: No, I would not be happy with that.

I mean, I don’t generally drink during regular business hours, and bans on that are common and understandable, but what I eat is my business.

There are plenty of ways to cut down on a corporate carbon footprint without prying into people’s mouths. For example, I emailed WeWork and asked if they assist with carpooling. Someone who is not allowed to eat meat on the company dime responded with alacrity:

“In general, we do not offer carpooling, but if you're interested in space I can definitely assist.”

There’s something for them to work on.

They could also be a bit more subtle.

Informa, the owner of Nation’s Restaurant News, which bought our previous parent, Penton, at the end of 2016, moved us to new offices that don’t have vending machines selling tasty non-nutritious snacks, but that do have free fruit. That gave us a clear message, plus free fruit.

To be fair, WeWork’s not saying that their staff can’t eat meat on the job, but depending on what that job is and how many work-related meals an employee eats, denying reimbursement for meaty meals could certainly force those workers in a gastronomic direction they might not want to go.

There’s something just a bit too controlling about that for me to be comfortable with.