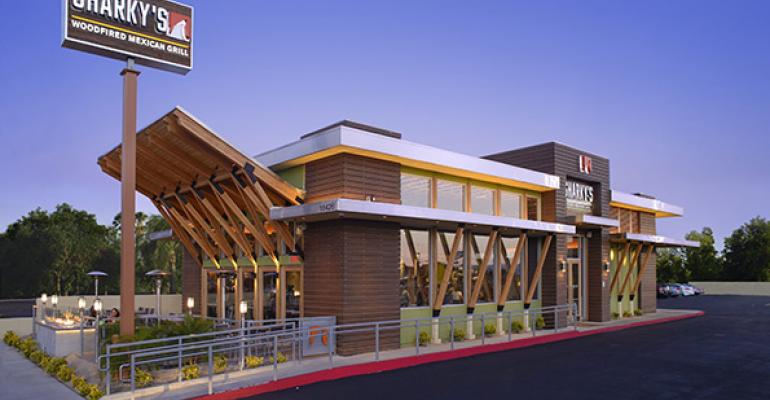 The new prototype, which opened in Northridge, Calif., in July, is the 23-unit chain’s first freestanding restaurant built from the ground up. It brings together design elements tested at five locations over the past three years.

The goal, founder and CEO Steve Paperno said, was to bring the restaurant design up to speed with Sharky’s menu, which has evolved into a lifestyle brand with a focus on healthful fare, including organic and local produce and meat raised without added hormones and antibiotics.

“The environment of a restaurant really says a lot about the food,” Paperno said. “This freestanding building was the peak of what we were openly trying to do in the sense of melding the environment with the food. We’ve got the great food. Now we’re saying, let’s bring in this amazing environment.”

After opening July 13, the Northridge unit is showing sales about 20 percent higher than the company average for new openings, and that’s before the local college began its fall semester. The Northridge location is near California State University, Northridge.

Paperno projects the unit sales will be about 30 percent higher than the system average.

Sustainability was also a goal. The exterior uses a wood alternative made of recycled plastic. Oven hood and air conditioning units have variable speed motors to save energy. Mechanized window coverings are activated by sunlight to reduce the building heat load.

At the time, the concept was in line with the “fresh Mex” trend, competing with players like Baja Fresh Mexican Grill, which touted fresh salsas and the lack of lard or frozen products.

But Paperno was one of a growing number of consumers who began living more healthfully, exercising and looking for organic ingredients and better-for-you options. As a result, he evolved the menu at Sharky’s to meet those needs.

Now the menu goes beyond Mexican fare to include things like the “Superfoods” line, which includes the top-selling vegan salad with red and white quinoa, organic baby spinach, cabbage, jicama, cucumber, sweet peppers, cilantro, green onions and an avocado vinaigrette, with fresh avocado, a sprinkle of toasted flax and chia seeds.

Burritos and tacos are still on the menu, but so are pizzas, soups and “power plates,” with a protein and three sides.

Core ingredients, like beans, rice, tofu and greens, are organic. Meats are raised without added hormones or antibiotics. Corn and oils are not genetically modified.

Sharky’s has long offered beer and wine, but the new prototype has an expanded beverage program with more craft beers and alternatives like cider and kombucha, the latter of which has been tremendously popular.

“We sell about two kegs of kombucha a week,” said David Goldstein, Sharky’s chief operating officer. “But no hard alcohol yet. That’s not on our radar right now.”

Sharky’s has always opened in end-cap or in-line locations in the past, and those models will continue where warranted. The goal will be to do more freestanding units like Northridge, though Paperno admitted that may be more feasible outside California, where real estate costs are high.

Of Sharky’s 23 units, 17 are operated by franchisees, but Goldstein said growth will include both company and franchise restaurants.

One more Sharky’s is scheduled to open in 2015, with another four locations on deck for 2016. One planned for the Studio City neighborhood of Los Angeles will be open for breakfast, in part because it’s moving into the location of a former family restaurant known for its breakfast, but also as a growth opportunity.

“We’ve always wanted to move into breakfast, but we want to do it properly,” Paperno said.

As the fast-casual category grows, Paperno said Sharky’s is positioned to move a bit closer to casual dining.

The average check is $14.71, at the high end of fast casual, but entrees are generally priced around $8.50, and “lifestyle users” tend to focus less on price and more on food quality, Paperno said.

“We believe our pricing is aligned with what premium fast casual looks like today,” he said. “When it comes to food, lifestyle users aren’t going to quibble about a 50-cent difference on menu items.”

The chain’s average unit volume is just under $2 million, and systemwide sales year to date have risen over 10 percent compared with last year, Goldstein said.

Sharky’s has become less of a “Mexican” concept and more of a lifestyle brand, Paperno admitted. But the menu has evolved with the changing tastes of consumers.

Goldstein said: “We can give a nod to being Mexican inspired. But in other cases, we can take people on a flavor journey. A lot of it has to do with that trust built with our customers.”