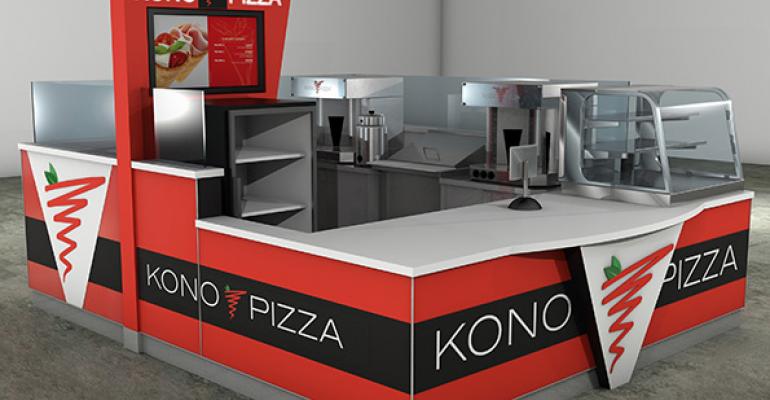 Concepts aim to save money, get in front of customers with micro-locations

When David Ragosa and his business partners brought Kono Pizza, an Italian pizza cone concept, to the U.S. more than a year ago, they did what everyone else did and launched a brick-and-mortar location.

But they quickly realized that it might be best to go small. Traditional locations are expensive, and pizza cones are the ultimate food to eat on the go. So they launched a kiosk.

“Brick and mortar can be challenging,” Ragosa said. “It costs twice, almost three times as much. And then you’re dealing with more permitting processes that can slow down your growth. We can get three carts or kiosks running within six to 12 months. Three inline stores take 12 to 24 months to find locations and work out logistics.”

More concepts are turning to small kiosks — and even smaller, more portable carts — to quickly add locations and save on investment costs. Franchisees have been drawn to kiosks and carts because of relatively low build-out costs, particularly in the post-recession era, when financing has been tougher to come by for first-time operators.

But establishing a kiosk isn’t as simple as placing one in the middle of the mall. There is a science to it, operators said.

“It isn’t just throw a dart, land and open,” said Rob Israel, founder of the popcorn chain Doc Popcorn, which has 100 locations, 80 of which are kiosks or smaller carts, which the company calls “popkiosks” and “popcarts,” respectively. “Before you think about bringing water and electric to the area, you have to determine whether it’s a viable location; is traffic passing the area; is it a good neighborhood for popcorn?”

The rewards, however, can be great. Rather than locating along a wall that customers can easily miss, a kiosk in the middle of the walkway makes it easier to see.

“It is an exciting and wonderful business model,” Israel said. “Once you get the right location, it’s like a moat. You’re there. Traffic is passing by you. It is easy to touch the consumer from that kiosk location.”

The concepts offer higher returns on a build-out. A Doc Popcorn kiosk can be up and running for less than $150,000, although the cost generally varies. A shop could cost more than twice that, according to the company’s most recent franchise disclosure document.

While kiosks don’t generate the revenue that a shop can, they generate higher returns because of the lower build-out costs. Kiosks are typically prefabricated and less expensive.

“If you go from store to cart, it’s a third of the cost,” Ragosa said. “You can get in and operational quicker.”

But not all concepts can operate from a cart. Those that do are typically snack concepts or beverage chains with modest kitchen needs. Snack concepts also have lower check averages and require a lower-cost build-out to succeed.

“Rent costs are going through the roof,” said Mike Weinberger, CEO of Denver-based smoothie chain Maui Wowi. “We serve premium smoothies and Hawaiian coffees. Our ticket is about $6.50. You’re going to have to bring twice as many customers to make it work” in an inline location.

Maui Wowi has 450 “operating units,” 85 percent of which are what he calls “mobile kiosks.” The chain began in Utah 30 years ago as a mobile smoothie cart in part because its founders, Jeff and Jill Summerhays, didn’t have the money to start a restaurant, Weinberger said.

The chain’s smoothies can be easily made in a cart and have been tested for speed.

“That’s our niche, our bread and butter,” Weinberger said. “We have store models. But we’ve always been mobile and nontraditional.”

Mobile carts in particular enable these chains to take their food directly to customers at fairs and festivals. Maui Wowi will bring its smoothies to convention centers and has deals with six professional sports teams.

“We cater to the captive audience,” Weinberger said.

Doc Popcorn has successfully brought its popcarts to farmers markets, festivals and stadiums. The popcorn is a good alternative to traditional event popcorn with artificial butter, he said. The carts often sell 10 times as much as traditional popcorn.

“It’s staggering what you can do when you bring the brand to a place that had been doing lousy popcorn before,” Israel said.

“It’s less expensive, but they still get premium rents for those common-area spots,” Israel said. “So the prices can be a little aggressive.”

CEOs of kiosk-based franchisors said they are getting plenty of interest from franchisees, in part because of their lower costs. Ragosa said that for the cost of a single inline unit, franchisees could open three or four mobile carts.

“We’re getting more multi-unit franchisees jumping on, even now franchisees,” he said.

There is also some demand from malls looking for concepts that can add to their environment and lure people away from online shopping.

“You have to create experiences in these high-traffic areas,” Israel said. “The shopping experience can be easily done online. We’re adding something fun to the mall. Popping popcorn is fun for kids to watch. We involve our customers. They get to sample. That has real entertainment value.”