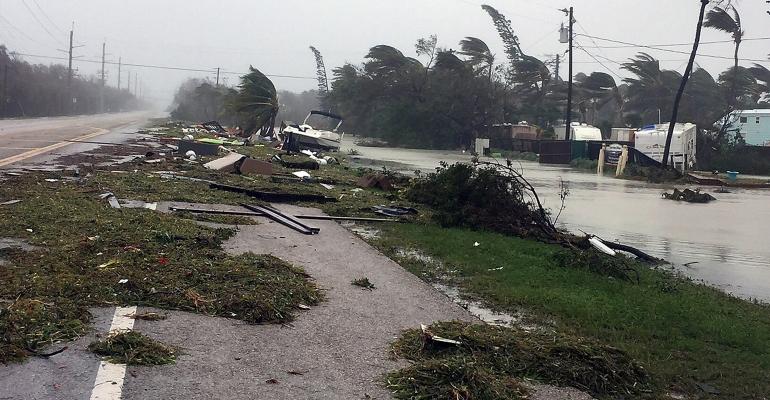 While storm wasn’t as bad as feared, its impact will still be felt far and wide

Investors sent stocks higher on Wall Street Monday, cheering a belief that Hurricane Irma didn’t have quite the devastating impact on Florida that many people feared when they went home for the weekend on Friday.

That includes restaurant stocks, which rose more than 1 percent Monday afternoon, according to the NRN Restaurant Index.

Yet the widespread storm still had a major impact on the restaurant industry, closing thousands of locations amid power outages and flooding along the Florida and north as far as Charleston, S.C.

Recovery from such a storm could take time, given the storm’s immense size.

“If you have a fire claim, you could probably get a local contractor to come out and help the next day,” said Bill Strout, president of Intrepid Direct Insurance, which specializes in providing insurance coverage to restaurant franchises. “But when you get a catastrophic event to an entire state, it stresses out all vendors. Contractors will probably come from all parts. It’s going to delay getting folks getting back up and running.”

One big problem was power. Florida Power and Light, the state’s largest utility, said on Monday that 3.5 million of its customers were without power. Overall, more than 7 million homes and businesses were without power throughout the Southeast as of Monday, according to the Associated Press.

Rob Gould, vice president of communications for FPL, told ABC on Sunday that residents and businesses on Florida’s West Coast could be without power for weeks because the utility needs “a wholesale rebuild of our electric grid.”

“That will take weeks,” he said, adding that it could end up, “The longest restoration and most complex in U.S. history.”

The longer power is out, the longer many restaurants will remain closed, which could endanger inventories, potentially prolonging their closures.

Florida is a major restaurant market, with 39,000 restaurants that employ more than 1 million people and generate nearly $42 billion in annual sales, according to the National Restaurant Association.

Bloomin’ Brands Inc., owner of Outback Steakhouse, Carrabba’s, Bonefish Grill and Fleming’s Prime Steakhouse, is based in Tampa, about 181 miles north of Marco Island, where the storm made its second landfall on Sunday.

Other chains have a heavy presence there: Subway has more than 1,500 locations in the state: McDonald’s has 900: Dunkin’ Donuts has well over 800; and Burger King has more than 700.

But some smaller chains have a higher percentage of their locations in the Sunshine State. About a third of the locations operated by Dallas-based Fiesta Restaurant Group Inc. are in Florida, including more than two-thirds of the 185-unit Pollo Tropical brand. Most of the rest are in other Southeast states getting hit with flooding from Irma’s remnants, now downgraded to a tropical storm.

Restaurants in Miami and Orlando reportedly have started reopening, but many others will remain closed as long as they are without power.

Waffle House, the Norcross, Ga.-based family dining chain known for its hurricane response given its concentration in the Southeast, said in a tweet that it has “teams on the ground” assessing damage at its Florida locations. “Many are without power,” the company said. Hundreds of the 1,900-unit chain’s locations are in the Southeast.

Federal emergency management officials use the number of Waffle Houses closed, open or operating with a limited menu as something of an informal test to determine the severity of a natural disaster.

Zoe’s Kitchen Inc. said it has 23 locations in Florida that are closed due to the hurricane.

“At this our focus is on the safety and well-being of our team members and guests that have been hit by Hurricane Irma,” CEO Kevin Miles said in an email. “Once the affected areas are back and stable, we will then begin to focus on the business interruption.” He said all Zoe’s locations would be accepting hurricane relief donations for the Red Cross through the end of September.

Subway said on Monday that most of its 1,500 Florida locations remain closed on Monday. “As soon as it is safe, our field teams and franchisees will begin assessing the situation,” the company said in a statement.

Panda Express, meanwhile, said it would continue to pay more than 1,000 employees who cannot work because of restaurants closed during the hurricane.

The company also said it is expanding its efforts originally put in place in the aftermath of Hurricane Harvey. Panda is planning to raise $4 million for hurricane relief efforts, including a $1 million donation, split evenly between the American Red Cross and The Tzu-Chi Foundation, through its Panda Cares Foundation. The company also plans to raise $3 million through in-store donations.

Strout said it would take some time before insurers understand the full extent of Irma’s toll. “You’re talking 10s of billions and maybe up to $100 billion,” he said.

Boston-based risk modeling firm AIR Worldwide on Monday lowered its estimates of Irma damage to as much as $40 billion — down from its previous estimate of as much as $65 billion. The storm’s path on the western side of the state likely reduced its overall potential impact.

Strout said that business owners in these areas need to stay in touch with both employees and vendors during an event. If they’re able to open, they may need to make alternative delivery plans and do some marketing to let people know they’re in business.

Most contracts have “force majeure” clauses that essentially waive contractual obligations in the case of catastrophes and natural disasters such as hurricanes. So a supplier whose warehouse was damaged would not have an obligation to bring food to a restaurant, and so the operator might have to find a different distributor, for instance.

He recommended that business owners take pictures of damage and keep receipts of anything spent on repairs. If the damage is major, the insurance carrier would likely prioritize the claim.

One challenge could be flood insurance. Typical property insurance covers against a loss of income due to storm-related closures. And good insurance would cover against losses due to sewer and storm drain backups. But they wouldn’t cover against flooding from storm surges  — which has been a big issue along coastal communities like Miami, Jacksonville and Charleston.

And many restaurants, like many homeowners in flood plains, don’t always buy flood insurance through the national flood program.

“It’s definitely going to be an issue for a lot of restaurants,” Strout said. “Some will not buy it because they don’t think they’re in a flood plain.”

Correction: Sept. 12, 2017  An earlier version of this story misstated the number of people Florida restaurants employ. It is more than 1 million people.

This story has been updated to include information from Subway and Panda Express.
TAGS: Finance News
1 comment
Hide comments
Related
Sponsored