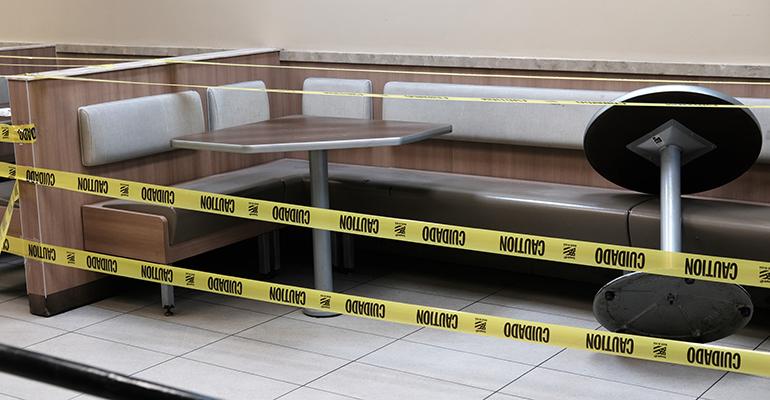 The restaurant industry’s recovery from the spring depth of the COVID-19 pandemic appeared to stall in November, according to employment, sales and traffic data released this week.

“The November employment decline wasn’t a complete surprise, as restaurant sales growth ground to a halt in October,” according to the National Restaurant Association’s monthly report. “As a result, the restaurant industry remains 2.1 million jobs below its pre-coronavirus level.”

Dallas-based Block Box Intelligence on Thursday said November restaurant same-store sales were down 10.3% and same-store traffic was down 16.3% as most of the nation saw a surge in COVID-19 cases and deaths, leading to more local restrictions.

“Restaurant sales saw another decline during November, posting the worst results since August,” Black Box reported, noting that was a 3.8 percentage-point decline from October’s results. That was the first month since April that restaurant sales performance had worsened month over month.

“The last time sales growth diminished back in April, the country was at the height of the stay-at-home guidelines and under the most restrictive dine-in capacity limits,” Black Box said.

The restaurant association’s chief economist, Bruce Grindy, noted that a resumption of job growth in the industry doesn’t have an immediate catalyst in the immediate future.

“Given the rising restrictions on indoor dining and the likelihood of significantly scaled-back holiday celebrations, business conditions will remain extremely challenging in the coming months,” he noted.

By segment, full-service operators (58%) were more likely than limited-service restaurateurs (40%) to say they expect to reduce staffing levels during the next three months.

The Bureau of Labor Statistics on Friday said total nonfarm payroll employment rose by 245,000 in November.

“The pace of improvement in the labor market has moderated in recent months,” the bureau said. “In November, notable job gains occurred in transportation and warehousing, professional and business services, and health care. Employment declined in government and retail trade.”

November’s loss of jobs in food and beverage establishments led the Independent Restaurant Coalition to highlight its call for federal industry assistance.

“We have warned Congress for months that winter will bring another wave of closures and layoffs – they’re here,” the coalition said in a statement. “Outdoor dining is a distant memory while indoor dining has been restricted in many states across the country, and — unlike in March — restaurants have already endured 10 months of diminished revenue.”