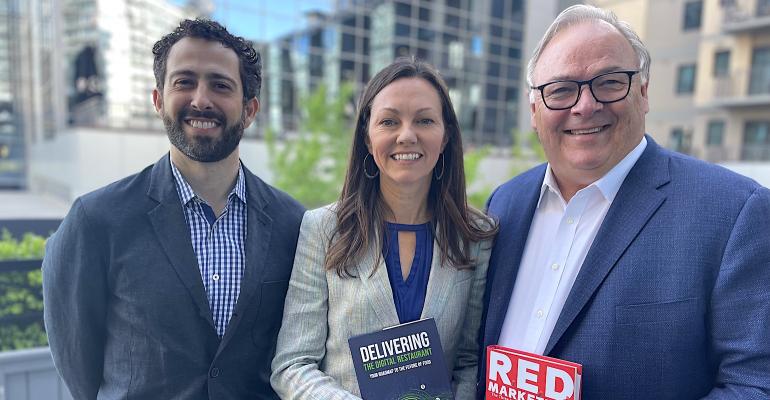 Two seasoned restaurant executives and recent authors provided insights into the future of personalization and digital layering in the restaurant industry during an event this week in Dallas, saying the industry is on the verge of another “category killer.”

Creed is the author of “R.E.D. Marketing: The Three Ingredients of Leading Brands,” with “R.E.D.” referencing relevance, ease and distinctiveness, and Sandland wrote “Delivering the Digital Restaurant: Your Roadmap to the Future of Food.” (Sandland is also a regular contributor to NRN’s Speakerbox contributing author series.)

“We're in a new era,” Goldstein said before the event. “And I'm actually really excited about this new era.”

Citing Sandland’s book, Goldstein added that “where digital has become a key element of every restaurant is that data and personalization becomes far easier because you know more about your guest. You're not guessing.”

“We've seen this in another part of hospitality with travel. We've seen this with e-commerce brands, and we are going to see this with restaurants,” he said, “where it's not just about the quality or food service and location. Now it's about how deeply you understand your guests through data and how you are using that to differentiate. That's actually really exciting. It's hard. It's a new skill to build, but it's a really exciting for the years for to come.”

“When disruption occurs naturally rather than have to be forced the big guys have to defend themselves like they've never defended before,” Creed added. “And the small- and medium-sized guys have a chance to disrupt the big guy.”

Sandland, who admitted to using smartphone apps not for the rewards but for the ease of ordering, said some concept will combine all the elements “into what is the next category killer.”

Restaurant quick service was followed by casual dining and then fast casual, she said.

“Each of those in successive waves took over the restaurant industry,” Sandland said. “And someone is going to figure out how to combine all of this e-commerce consumer data stuff, electrification of kitchens, ghost kitchens, delivery, off-premises, new cooking methods [and] direct-to-consumer brands.

“Someone's going take all of those ingredients and mix them together in an amazing way that becomes the next category killer,” she said.

Creed recently joined Thanx as an adviser to the board.

Want to hear more from Creed, Sandland and Goldstein? Stream an interview below.