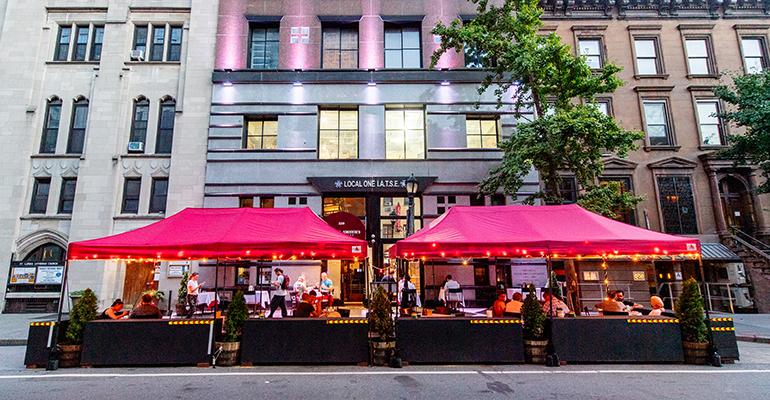 Seating could also be extended in front of neighbors’ property

Speaking on the Brian Lehrer show on local National Public Radio station WNYC, de Blasio said restaurants can “really take this model and make it part of the life of the city for years to come.”

According to the mayor’s office, more than 10,000 restaurants in the city have introduced outdoor seating, saving an estimated 90,000 jobs.

The New York City Hospitality Alliance, which has been advocating to keep and extend outdoor dining, and to allow heat lamps, which are strictly regulated in the city, said policies were “forthcoming” to make all of that permissible.

The new measures include expanded seating in front of adjacent properties, provided that restaurants file the appropriate paperwork and the property owners formally agree to it. But the city also will issue guidance for sturdier outdoor setup requirements, details of which are expected next week.

Tent enclosures will be allowed to keep diners warm, but if they’re completely closed, they will be limited to 25% capacity, just as indoor dining will be once that is allowed on Sept. 30.

Partial tent enclosures, with at least 50% of the side wall surface being open, will not have those capacity restrictions.

Enclosed structures such as plastic domes will be allowed for individual parties but must have “adequate ventilation to allow for air circulation,” the alliance said.

It also cautioned restaurateurs against investing in expanded space or sturdier structures until the actual guidance is issued, and also urged them not to set up heating systems that might not comply with Department of Buildings or fire department requirements.

“This is all very good news for our industry,” the alliance said. “The NYC Hospitality Alliance will be working closely with Mayor de Blasio's administration and City Council on all the details of the program, which will be released in the near future.”

In a joint statement, alliance executive director Andrew Rigie and counsel Robert Bookman said, "Outdoor dining has transformed New York City's streetscape for the better and has been a critical lifeline for thousands of small businesses and jobs throughout the five boroughs during the COVID-19 pandemic. We thank and look forward to working with Mayor de Blasio's administration and the City Council on rolling out this incredibly important expansion of the popular Open Restaurants program.”

The Brooklyn Chamber of Commerce also expressed appreciation for the measures.

"Outdoor dining has been a monumental success for restaurants all around New York City. Mayor de Blasio's decision to safely extend outdoor dining year-round will not only provide a vital lifeline to our struggling restaurants, but will also enhance the vibrancy of our neighborhoods well into the future," chamber of commerce president and CEO Randy Peers said in a statement.