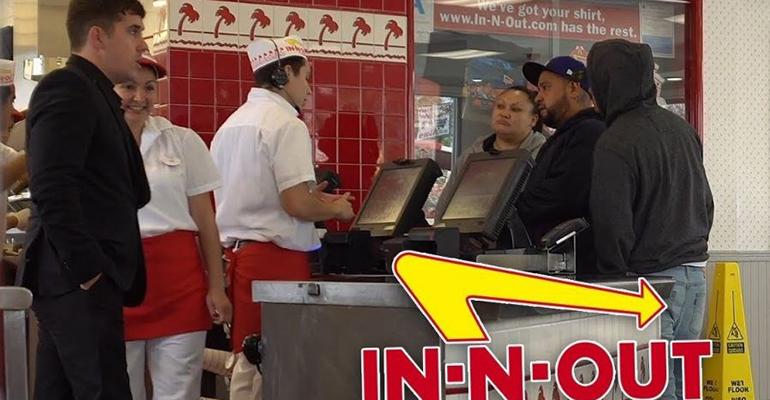 California burger chain sues for more than $25,000 in damages

California institution In-N-Out Burger commonly takes legal action against burger joints violating their highly coveted trademarks. But, in its most recent claim, the fast-food icon is suing a man for being an executive copycat and social media troll.

The prankster, Cody Roeder, barged into employee-only areas making demands in front of customers. With the help of others, Roeder “covertly filmed” the mid-March visits, the lawsuit states.

Savvy employees never bought his story, knowing that Lynsi Snyder is the top boss at the chain. Snyder, the granddaughter of In-N-Out founders Harry and Esther Snyder, is the president and CEO. She has been full control of the company since 2010.

In-N-Out appears to be making an example of Roeder, who posts video pranks under a YouTube channel called Trollmunchies. In-N-Out is seeking more than $25,000 in damages.

The chain’s attorney, in a statement, said the privately-held company has seen “an increase of visitors to our stores, who are not customers but instead are intentionally disruptive and who then try to promote themselves through social media.”

“These visitors have unfortunately used deceit, fraud, and trespass to their own advantage, and in each instance, they have attempted to humiliate, offend, or otherwise make our Customers or Associates uncomfortable,” In-N-Out lawyer Arnie Wensinger said in a statement. “We believe that we must act now and we will continue to take action in the future to protect our Customers and Associates from these disruptions.”

According to video reports and the lawsuit, Roeder walked into two In-N-Out restaurants earlier this month dressed in black business attire.

On both occasions, he introduced himself as the CEO.

During one visit, Roeder “walked through the kitchen” and demanded employees make him cheeseburger and fries for a taste test, the lawsuit states. He also accused one store of unsanitary conditions. He called the food “garbage,” according to the March 23 lawsuit. Roeder appears to be a serial prankster. He has posed as employee at other restaurants and retailers including Kroger-owned Ralphs, according to the Trollmunchies Twitter account. A spokesman for Irvine-based Taco Bell said Roeder has pranked Taco Bell, as well.

The Trollmunchies YouTube channel, which has logged 63.5 million views since 2012, states this about the owner: “Hi! My name is Trollmunchies aka Cody and I love to make people smile and laugh where it's my past gaming videos or my pranks and vlogs!”

In early March, Broadband TV booted Trollmunchies from its network because it violated terms of service, according to a Trollmunchies Tweet.

In-N-Out, which turns 70 years old later this year, is vigilant when it comes to protecting its brand. Over the years, the chain filed numerous trademark infringement lawsuits against independent restaurants and chains trying to knock off everything from its signature Animal Style burger to its arrow logo.

In-N-Out operates more than 325 restaurants in California, Utah, Arizona, Texas, Nevada and Oregon. Last year, the chain announced plans to add as many as 50 restaurants in Colorado.