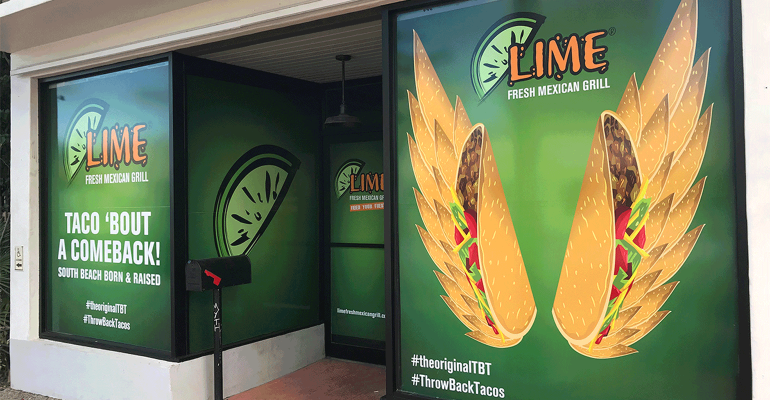 After struggling under Ruby Tuesday, the Mexican grill is poised to expand again

Lime Fresh Mexican Grill is literally going back to where it all began.

A franchisee is opening an 800-square foot location in Miami’s South Beach in January, in the former home of the original Lime Fresh.

The South Beach restaurant is part of broader expansion plan for the fast-casual Mexican chain. Lime Fresh grew steadily after its start in 2004, but then struggled under ownership of troubled bar-and-grill operator Ruby Tuesday.

Kensington, Md.-based EverFresh Endeavors, which acquired the Lime Fresh brand and franchising rights in 2016, now has eight Lime Fresh locations in South Florida, including South Beach, and two on-campus locations. It plans to open six more over the next 24 months.

The new South Beach restaurant is operated by franchisee Left Field Holdings, which will also operate the coming six units.

“We have been looking for a location on South Beach for some time now,” said Grant Gussin, president of Left Field Holdings. “We are so excited to return to the same location where it all began and to be back on the Beach.”

The new South Beach location will offer its 2004 menu as a temporary promotion and feature original staff uniforms. Lime Fresh employees who worked at the original restaurant will also return to the location.

Lime Fresh was started by restaurateur John Kunkel, who was noted for his hands-on style and choosiness about selecting just the right franchisee.

There were four Lime Fresh restaurants operating in early 2009. That number had grown to six by September 2010, when casual-dining operator Ruby Tuesday signed a master license agreement.

Kunkel has since moved on to open high-concept Thai and barbecue restaurants in the Miami area, as well as Yardbird Southern Table & Bar.

But as the troubles mounted for Ruby Tuesday’s namesake restaurants amid a slowdown in the bar-and-grill segment, the company decided to retreat on Lime Fresh.

It closed 11 locations and sold eight to Rubio’s Restaurants Inc. for $6.3 million in late 2015. It sold the remaining six franchises to EverFresh for $4.6 million.