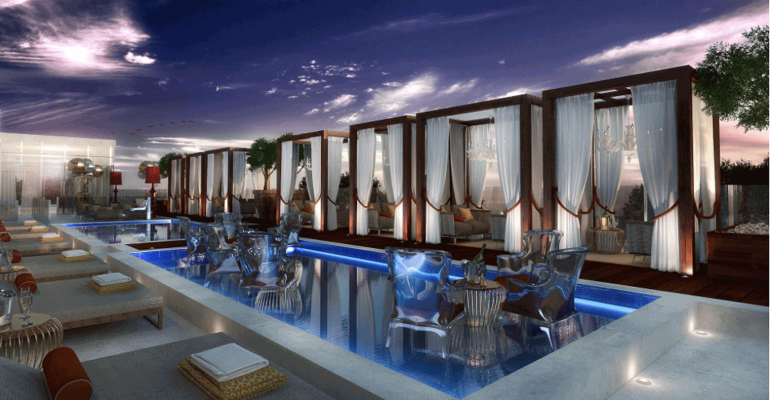 Circo
A rendering of Circo in Dallas
Operations

Le Cirque, Circo to get new life in New York and Dallas

The famed restaurants Le Cirque and sister brand Circo are close to announcing new locations in New York. At the same time, a location of Circo is scheduled to debut as a revamped “spa restaurant” in Dallas in February.

After more than 40 years as a power-dining spot in Manhattan, the iconic Le Cirque, founded by the Maccioni family, is scheduled to close at the end of the year in its current location in the Bloomberg building. Sister restaurant Circo in New York also closed several weeks ago.

The closures were blamed on a dispute with the landlord, but NYLC LLC, operator of the two New York locations and led by Le Cirque founder Sirio Maccioni’s son Marco Maccioni, filed for bankruptcy protection in March.

However, Carlo Mantica, CEO of parent company Le Cirque International LLC, said last week that new locations in New York for both Le Cirque and Circo will be unveiled in the next few weeks, adding that the version of Le Cirque to come will be “smaller, vibrant and clubbish.”

Eater has reported that the company is looking at a spot on the Upper East Side of Manhattan. The two New York restaurants will be operated by a new licensee with new investors that could not be disclosed, said Mantica, but the Maccioni family will remain involved.

Meanwhile, the first Texas location for the Circo brand is getting ready for its debut in Dallas in mid-February, operated by licensee White ROC Hospitality Group, which also plans to develop the Le Cirque brand domestically.

The Dallas-based group, for example, plans to open a Le Cirque in Beverly Hills, Calif., within the next two years, said Lauren Santagati, CEO and an owner of White ROC.

Circo Dallas, meanwhile, will serve as a prototype for a brand refresh and redesign for future locations while maintaining the Maccioni family’s DNA for the restaurants, she said.

The 25,000-square-foot, two-story restaurant in Dallas is scheduled to open in a residential tower close to The Ritz and other glitzy hotels. Circo Dallas will be a “resort-style restaurant,” with poolside dining, cabanas and access to the tower’s spa.

A partner in the restaurant is Barbara Adelglass, who also co-owns the cosmetic surgery and skin-care center Skintastic in Dallas.

“So if you’re having drinks by the pool and you want to get eyelashes or something, you can go right upstairs,” said Adelglass. “It will be a local destination, but it will also appeal to travelers.”

A rendering of the exterior of Circo in Dallas
Photo: Circo The design of the Dallas location will help shape what’s to come for Circo in New York, said Santagati. White ROC will handle certain aspects of operation for locations in New York as well, including marketing and purchasing, she said.

There are licensed locations of Circo in Abu Dhabi and the Dominican Republic as well as Le Cirque restaurants in Dubai, India and Las Vegas. A Le Cirque in Las Vegas’ Bellagio is also licensed separately and doesn’t need a brand refresh, said Santagati.

In New York, however, the circus-themed design of the restaurants had become a bit dated and needed a new look, said Santagati. The group, however, intends to keep the same emphasis on service and the quality of food.

Some of New York’s top chefs have come through the kitchen at Le Cirque, including Daniel Boulud, David Bouley, Terrance Brennan and Geoffrey Zakarian.

In recent years, however, Le Cirque’s menu has come under fire. The New York Times in 2012 gave the restaurant one star in a brutal review. More recently, The New Yorker offered a eulogy spotlighting the iconic history of Le Cirque as the epitome of the clubby Manhattan fine-dining scene, but also as a restaurant where “the food was neither the draw nor the point.”

Santagati disagreed, arguing that Le Cirque was the first to offer classic dishes like crème brûlée and pasta primavera. “It’s not tired. It’s that other restaurants are copying what they had first,” she said.

The menu at Circo Dallas has not yet been finalized, but it is being developed by Alfio Longo, a longtime chef of the New York location, who will relocate to Dallas, Santagati said.

Circo Dallas will also aim to have the massive wine collection Le Cirque was once famous for — though Santagati said the New York location has been forced to sell some of its 1,500-bottle collection.

White ROC Hospitality Group, meanwhile, has also acquired the Fat Rabbit Kitchen and Bar and Masque nightclub, which are across the street from the Circo Dallas. Santagati is a partner in Fat Rabbit, which will close in early 2018.

White ROC is planning a new concept in the spot, not yet revealed.

Adelglass hinted that Le Cirque may also come to Dallas.

Le Cirque and Circo “already have a strong base and reputation. We want to take it further,” said Adelglass. “Stay tuned.”