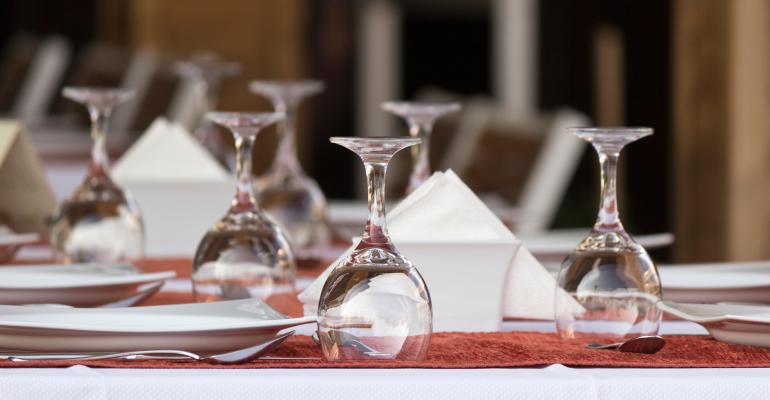 Restaurants didn’t take root until the early 19th century. What if they never did?

One of my favorite sportswriters, Steve Rushin, wrote a story last year called “A World Without Mookies,” in which he imagined how different life might be without sports.

The piece got me thinking: As a pastime, sports are thousands of years old, but restaurants didn’t really take root until early 19th century. Yet restaurants are just as ingrained in our lifestyles, books, film, music, art and popular culture. Playing or watching sports is optional, but eating is not. To me, it’s much more difficult to imagine a world without the foodservice industry.

Without restaurants, you wouldn’t be able to pronounce chipotle, shiitake, charcuterie, quinoa, souvlaki, half-caf, barista or venti, much less use them in a sentence. Without restaurants, brunch would be a typo, and only baseball would have starters. There would still be breakfast, lunch and dinner, but without restaurants, they would be miserable. To meet a friend for coffee or lunch would mean going someone’s house or hosting, every single time.

There would be no chefs — or celebrity chefs. No James Beard, Paul Bocuse, Jacques Pepin, Wolfgang Puck, Auguste Escoffier, Thomas Keller, Emeril Lagasse, Alain Ducasse, Jonathan Waxman, José Andrés, Nobu Matsuhisa or Alice Waters. Gordon Ramsay would be a carnival sideshow barker and Guy Fieri would be running the Tilt-a-Whirl down the midway. Anthony Bourdain’s parts would be known.

Instead of having buildings named after them, Howard Johnson would just be a character in Blazing Saddles, Harry Caray a dead baseball announcer, and Mike Ditka and Michael Jordan would have to eat at home. John Daly would have to nowhere to go after a celebrity tournament to chug beer, ogle waitresses and down wings. Eggrolls would be strictly a White House lawn activity at Easter. Farm to table would be called food, and all diners would be locavores. Williamsburg and Wicker Park would be blighted neighborhoods. Every worker, student and commuter would brown bag at noon.

The Two Broke Girls would both be unemployed; Cheers would be set at an AA meeting; and Ross, Joey, Chandler, Monica and Rachel would meet at the local Kinko’s instead of Central Perk. Delhi would only follow the word “new,” and the most famous scene in When Harry Met Sally would take place in a community center, not a table. Placemats would be found only in Cleveland’s NFL franchise.

Without restaurants, Five Guys would describe how many people you needed for a men’s league basketball game, not your favorite lunch spot. You’d take a Subway, not eat at one. Dominos would be played, not delivered. Shake Shack wouldn’t be a place; it would be a prank you play on a friend using the outhouse. Drive-thru windows would be a New York Post headline describing the actions of a Long Island drunk driver, not the car’s involvement in fast food. The Cheesecake Factory would be a business that manufactured pinup girl posters, calendars and t-shirts. “Ruby Tuesday” would a Rolling Stones hit from 1966. The only time you’d visit a hut is if you lived in Bora-Bora or needed a pair of sunglasses. DiGiorno’s would have no tag line for their commercials.

General Tso’s Chicken would be a historical reference to military cowardice, not No. 14 on the takeout menu. Potstickers would be price labels in a California medical marijuana dispensary, instead of Asian dumplings. The Early Bird special would refer to discounted 6 a.m. hot yoga classes, not two fried seafood platters for $12.99. A frequent diner would be a Weight Watcher’s member, not a target market. A salad bar would be the upper limit of how many chopped vegetables you could eat in a sitting, not a traffic generator. Point of sale would reference the tip of a jib, not a cash register. Eighty-six would merely be a number between 85 and 87, and not refer to running out of anything. There would be no bustubs, busboys, monkey dishes or salamanders. The only thing in the weeds would be your lost Frisbee, not the new waitress. Windows and doors would open and close, but not managers.

Technology would be radically different sans restaurants. UberEats would be fruit or nuts you plucked from a tree, not an app-based delivery system. Grubhub would describe your fridge or pantry. Yelp is what your dog would do if the rocking chair leg caught his tail. TripAdvisor would just be a detour sign.

Only computers would have menus. The only tips would come from bookies or brokers. “Surf and turf” would be the marketing slogan for Del Mar racetrack in Southern California, not a steak and lobster combo. A side of mushrooms would be a witty remark about fungi that Oscar Wilde muttered to a friend, not a sliced vegetable blanched in red wine and beef stock to accompany a medium-rare ribeye. A New York Strip would be a new inmate processing procedure at Riker’s Island.

Without restaurants, you could die for your beliefs or your country, but not for the Molten Fudge Flan with raspberries and powdered sugar. You could experience death by malaria, but not chocolate. The only weekend “reservations” my wife and I would have would center around our daughter bringing her new boyfriend home. Without restaurants, Ireland and Scandinavia would no longer be embarrassed by their culinary absence, and return to their dual proficiencies at drinking and depressing filmmaking.

A greasy spoon would describe something to stir chili with, not a roadside diner. Without restaurants, the CIA would be an agency you’d avoid, not a program you’d matriculate in. A well drink would be a dipper or bucket of water. Prime rib would be an Old Testament explanation of how God made woman, and the most popular Buffetts would be Jimmy or Warren, not Bellagio’s. Casual-theme would refer to your college roommate’s sartorial choices, not the architecture and menu of a branded restaurant group. A chain would restrain your dog, or secure your wallet. It would not describe a string of identical franchised restaurants. There would be no full service or quick service, just self service. And fast food would refer to rabbit.

Meanwhile, if there were no restaurant business, there would be no Greensboro Four on Feb. 1, 1960, to jumpstart the Civil Rights movement with its most influential and significant sit-in. And our nation would most likely be in a Depression, because 14.4 million people would be unemployed, 1.7 million new jobs would not be created annually, and an additional 16.5 million citizens would be jobless because the manufacturing, distribution and brokerage industries that directly support foodservice would be nonexistent.

This is a world I would not like to live — let alone eat — in.

The restaurant business is far from perfect, but it is ingrained in our national fabric and has given hundreds of thousands of immigrants a start, tens of millions of teenagers their first jobs, and countless people a second chance. Foodservice has jumpstarted juveniles, made mavens of misfits and built the greatest industry on earth.

Jim Sullivan is a popular keynote speaker at leadership conferences worldwide. His two books, Fundamentals and Multiunit Leadership, have sold over 400,000 copies. You can get his free catalog, apps, podcasts, insight and more at Sullivison.com. Follow him on LinkedIn, YouTube and Twitter @Sullivision.