Regulatory insights tied to the burgeoning use of CBD in foods and beverages, as well as the handling of the plant-based meat substitutes now taking foodservice by storm, were key areas of discussion at the 14th annual Nation’s Restaurant News Food Safety Symposium this fall.

Related: Restaurants approach CBD with caution as popularity grows like a weed 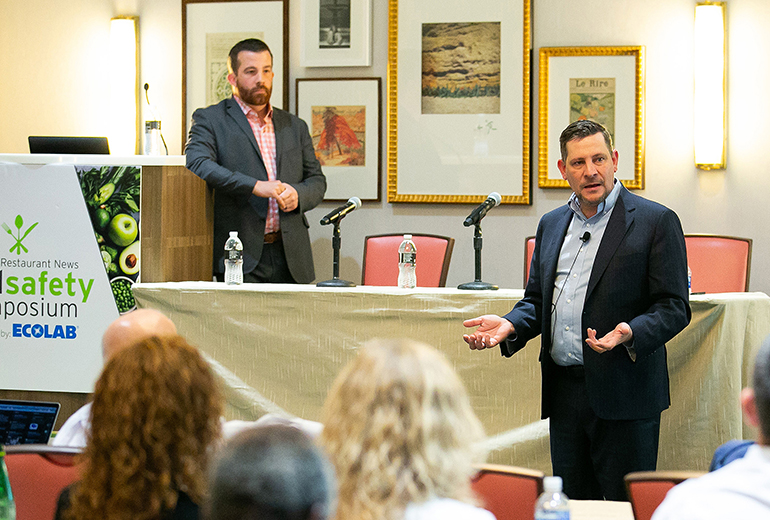 Cannabidiol, or CBD, is gaining popularity as consumers grow more comfortable with the hemp cannabis extract, but its use poses many food safety and regulatory questions.

“We are in the midst of one of the most remarkable and complex legal and cultural shifts in American history,” Shawn Stevens, founder of the Food Industry Counsel LLC law firm, said in a keynote address delivered with associate Joel Chappelle. “A new product. A new market. It’s unbelievable.”

CBD use in the restaurant space is “fraught with a little bit of risk,” Stevens said, citing local laws and the Food and Drug Administration’s oversight. And while he said related developments are evolving quickly and must be followed closely, “I predict, moving forward, that the FDA will legalize CBD for use in food products.”

Chappelle said CBD adoption and legislation like the 2018 Farm Bill, which differentiated hemp cannabis from marijuana cannabis, “is happening so quickly that ultimately the federal government has been cornered by its own policies over the past decades.”

In 1996 cannabis was illegal in all U.S. jurisdictions, he said. Now, 11 states have legalized marijuana for recreational or medicinal use, and it has drawn support from ex-lawmakers and celebrities, alike. Still, Chappelle added, the state of the law “remains very confusing.”

Earlier this year, a number of local health departments, from New York to Ohio and Maine to Georgia, cracked down on restaurants and bars serving CBD, even as a number of restaurant brands, including Fresh&Co and Carl’s Jr., offered items made with CBD.

Doug Davis, senior director for global food safety for Marriott International, told attendees that his company — which has more than 10,000 restaurants under 30-plus brands, as well as spas and wellness centers — is poised to take advantage of CBD approvals.

“Obviously, our customers are asking about it,” Davis said. “We’re using it in spas with CBD topicals in California and Colorado.”

Experts said many questions remain about CBD’s use, such as quality assurance on sources of CBD and allowable amounts safe for consumption.

“Nobody’s actually putting a tincture of CBD in any food and selling it,” Davis noted. “They are doing condiments — like a pesto or chimichurri — or they are doing sachet bags.”

CBD’s addition to drinks has been one of the more generally accepted uses, according to Davis. 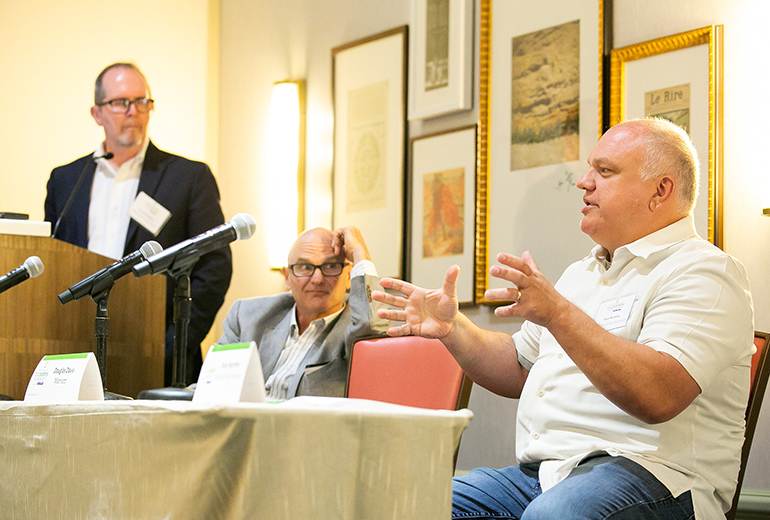 The growing popularity of plant-based “meats,” such as those from Beyond Meat Inc. and Impossible Foods Inc., generates a number unknowns for food safety experts.

Everything from the ingredient’s processing and potential allergic reactions to how to store and cook the plant-based products have yet to filter into the Food Code, according to experts on the Food Safety Symposium’s “Food Trends That Impact Food Safety” panel.

Issues abound, they said, and customers are raising questions about the products.

“They use 22 ingredients to replicate a burger, which is one ingredient,” said Marriott International’s Davis, who joined Brian Nummer of Utah State University’s Food Safety Extension division, on the panel.

“They are also adding back in all the vitamins they remove by processing,” Davis said, and the ingredients are highly refined, such as the use of beet powder and pea proteins.

Because many of the faux meat products contain pea proteins and other plant products, it also raises concerns about glyphosate residue levels from broad-spectrum systemic herbicides used in their production.

Safe storage is one question, said Nummer of Utah State University. “Is it a plant?” he asked. “Certain plant-based items — onions and potatoes — you can leave at room temp.”

Safe cooking temperatures are another. “Do I cook to my typical meat temperature, or can I just do 135[F],” he said. “When we put something together like this, is 135 safe? I wouldn’t recommend going down that low.”

Potential hazards are not yet addressed in the Food Code, he added, and training programs are just catching up with the growing number of plant-based meat alternatives. 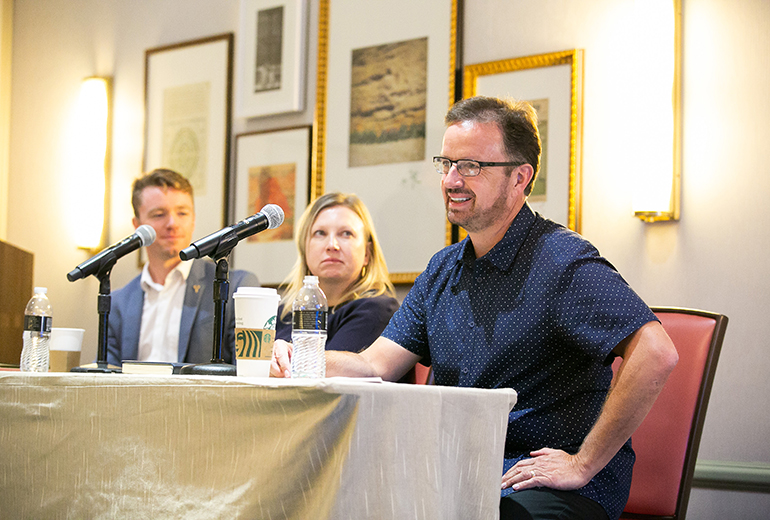 Joining Nel in that presentation were William Moore, director of safety and security for Eat’n Park Hospitality Group, and Mandy Sedlak, food safety and public health manager for the EcoSure division of Ecolab.

“Video is an interesting concept, if you do it correctly. [Researchers] have estimated that a 45-minute webinar or live-training session can be condensed effectively into two 4-minute video lessons,” Nel said.

He mentioned that his group moved away from “talking head” training videos to those using task or other imagery and underlying voice narration because viewers can get distracted “analyzing the person” when the instructor is shown simply speaking.

“Video is particularly powerful for food safety and compliance training because of fear” and other emotions it can easily convey, he said. “As soon as we can attach emotion to knowledge transfer it sticks.”

Nel stressed that training content creators can shorten the time it takes employees to reach initial food-safety or general job competence by focusing only on “core” lessons in early training. He recommended avoiding “edge case” details, or those associated with concepts or skills a worker may need later in the course of their job and for which training can be layered in over time. 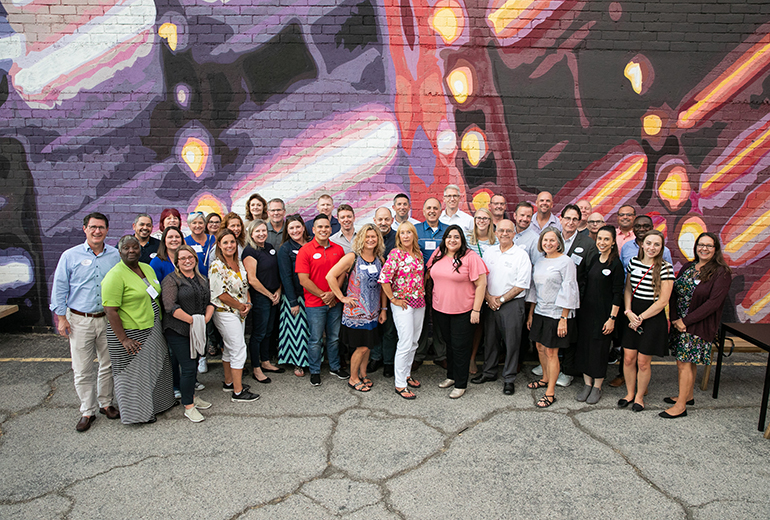 Don’t be afraid to have a little fun, too

“For example,” he said, “We had a managers’ golf outing [and] put signs at every hole about food safety that had a golfing twist, such as, ‘Cook all birdies to 165 degrees.’”

“We use [intranet] memes; we use Legos; we send food-safety selfies to senior executives; we do stuffed-animal germs,” Moore said of the unique props used to bolster Eat’n Park food-safety messaging, which also include nearly 2,000 View-Master stereoscopes with custom content reels and in-house illustrated posters.

Last year, Moore said, his team staged a six-hour food-safety meeting for managers that featured senior executives-sung parody songs from popular musicals, such as a “Mamma Mia!”-inspired ditty called “Diarrhea!” “This really builds engagement among our executives” and with their involvement “it also makes the [food-safety] program a little more relevant to operations,” he observed. 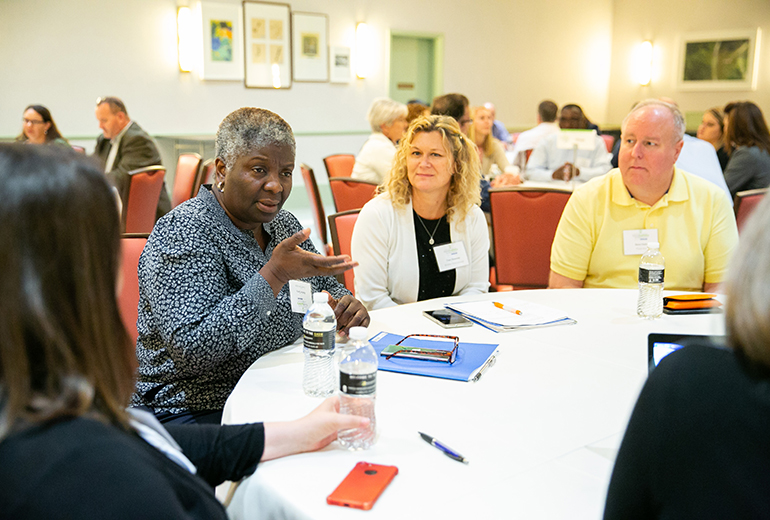 Safeguard foods out for delivery

Safety concerns around the rise in delivery of restaurant foods, particularly by third-party-services personnel, as well as examples, ideas and concepts for mitigating some of those worries, surfaced during the symposium’s roundtable discussions. They included:

* The example of restaurants that offer third-party delivery drivers free fries or beverages to reduce their temptation to open meal packages in transit to snack, thereby increasing the possibility of food contamination.

* The idea that tamper-resistant packaging is a “have-to-have, not a want-to-have” for delivery and that solutions might include the use of unique stickers to seal edges of conventional to-go containers or the use of once-and-done sealable bags.

* The concept of using receipt or packaging notations indicating at what time a meal was picked up, this to flag inordinate delays in delivery that may constitute improper and possibly dangerous food holding times.