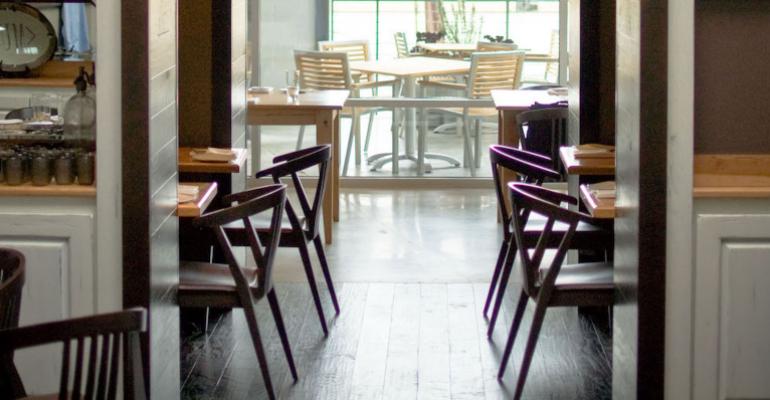 The restaurateurs say viral infections haven’t peaked, and neither they nor their customers are ready

Restaurants in Georgia have gotten the go-ahead to reopen their dining rooms starting Monday, April 27 — with numerous restrictions in place to help prevent the spread of the coronavirus — but many of them are choosing to stay closed for the safety of their staff and customers, according to local chefs.

“A lot of our opinions on the topic is it’s just a little too soon,” said Hugh Acheson, who operates  5&10 in Athens, Ga., and Empire State South and By George in Atlanta.

“It is definitely premature based on national guidelines,” he said. “We haven’t reached our peak [of COVID-19 cases] yet, and we haven’t plateaued, so there’s no logical reason to open up restaurants and bowling alleys and salons and all these other places,” all of which have been given the go-ahead to open. “And it creates a false sense of security, psychologically, to the citizens of Georgia to think that things are normalizing when we’re not quite there yet.”

Acheson said virtually none of the chefs he’s spoken to plan to reopen on Monday, and even if they did, they’d be hard-pressed to find customers.

“If I ask 100 chefs, pretty much everybody said they’re not opening up on Monday,” he said. “If I ask 100 customers, I’ll get one or two who are brazen enough to say, ‘yes, we’ll go out to eat,’ but the rest of them are not. They’re not ready.”

But the potential to open puts people who need the money in a tough spot, Acheson said.

That also holds true for workers at salons and tattoo parlors that can open, he said.

“Out of necessity they’re going to try and recoup some of the losses they’ve had in the last six weeks, but you’re putting them in a pretty dangerous position to be guinea pigs on our front line.”

He added that if those jobs are available but workers are too concerned to take them, they’d no longer be eligible for unemployment benefits.

Acheson and Satterfield both said that restaurants haven’t had time to develop the protocols and systems to open safely, given that Georgia governor Brian Kemp only announced the date for reopening on Monday, April 20, and didn’t issue the official guidance until late Thursday afternoon. The executive order has detailed instructions about how many guests are allowed in the restaurant at a time — 10 guests per 500 square feet of public space — and how to screen workers for illness, as well as more vague instructions such as “limit contact between wait staff and patrons,” and “where practical, consider a reservations-only business model or call-ahead seating.”

Acheson, left, said he needed three weeks to put those systems in place.

“There’s a lot of anxiety and expectation and pressure about reopening,” Satterfield said, “and this very quick and unplanned, impulsive declaration is a real slap in the face to a lot of restaurateurs with little or no regard to what we do. He just doesn’t get it,” he said of Kemp.

Meanwhile, both chefs are working to feed people who need it.

Satterfield has been commissioned by Emory Healthcare in Atlanta to prepare 2,000 meals per week for healthcare workers, which has allowed him to keep on 25 members of his staff — he’d normally have a staff of 45, although he had 39 when restaurant dining rooms were ordered closed.

Acheson, meanwhile, is being underwritten by hunger relief organization World Central Kitchen to prepare meals for people in need out of 5&10 and Empire State South.

They’re making a total of about 7,000 meals each week for communities in need and front-line medical workers.

“People are being admitted to hospitals not just for COVID-19, but for signs of malnutrition and starvation,” Acheson said. “We have a pandemic on our hands. So my role is to play crisis responder and dispatcher and producer of nourishing meals to make sure people feel cared for and fed and sustained.”

Click on the "Download" button to view the full Georgia guidance. The restaurant section begins on page 6.