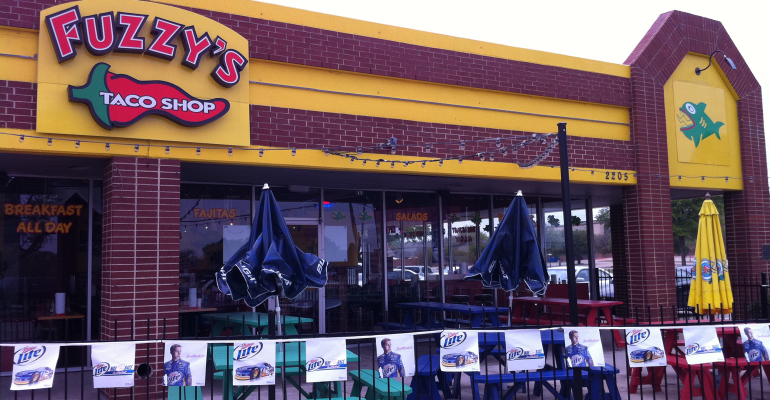 Fuzzy’s Taco Shop has tripled its franchised restaurant openings over the prior years in the wake of last year’s investment by NRD Capital Management, executives said.

The Fort Worth, Texas-based -chain debuted its 117th restaurant in May, in Bradenton, Fla. It had 90 units in February 2016, when Atlanta-based NRD Capital acquired a 70-percent stake in the company.

Fuzzy’s was founded in 2001 and offers a menu of Baja-style tacos with a fast-casual, counter-order service style. The company expects to open about 30 restaurants this year, mostly among franchisees.

“When we first started, Aziz and I had a conversation,” Knight said. “I basically asked him what he was most concerned with as we partnered up. He said, quite frankly, it was the infrastructure to support our franchisees. He was right on target.”

Knight said the corporate structure has evolved since the investment by NRD, which also holds a stake in Frisch’s Big Boy. “The evolution has been on beefing up every opportunity we have in marketing, development, real estate and analytics to choose the right real estate and hiring the right people,” he said. “If you are wanting to be a world-class organization, you have to get world-class people. You have to do it right and put it in a place from where a franchisee sits.”

Hashim said Fuzzy’s is well positioned among growing fast-casual segments with its Mexican emphasis, and that has helped expand average unit volumes.

“The consumer is looking for value, and some of the fast-casual restaurants lost the value equation,” Hashim said. “We’re growing not only unit counts, but AUVs, too. That’s hard to do in today’s environment.”

“Most of the investors in our fund are franchisees, so unit economics are a huge factor for us,” Hashim said. “What we saw in Fuzzy’s was not just amazing unit economics, but an amazing culture. The franchisees there are very highly regarded. It was a brand that was perfect for us.” “Very early on, we decided we wanted to start some company-store development,” Knight said. “We’ve signed two leases that should be opened this year in company markets, and we’re real close to signing a third one. We’ll possibly have three open by the end of ’17. We’ll continue on that path, with the goal of about five more in 2018.”

Knight said Fuzzy’s generally looks for real estate that covers 3,500–4,000 square feet, and accommodates about 150 seats, not including a patio or bar. “There are so many things you can do with a good taco,” Knight said. “Everybody enjoys a taco. In Texas, there are obviously a whole lot of options. What is exciting for us is how the brand is traveling outside of Texas. We do a Top 10 list of performers in the system every week, and one store out of Texas got in that Top 10 last week, and the rest were outside of Texas.”

Fuzzy’s has opened in its 12th state, with a new unit in Murfreesboro, Tenn.

The company has been able to maintain its $9 average check with few price increases, Knight said.

“As we grow, we are able to get better at purchasing and gaining more buying power,” he said. “That helps us maintain the value part of the concept.”

With 28 franchisees total, Knight said they are involved heavily in decision-making.

Hashim added that real estate costs are posing a challenge, and the franchisor can help in those decisions.

“Real estate has been inflated,” he said. “We want to make sure the franchisees don’t get ahead of themselves. We want intelligent growth. You can’t just accept any rent that is offered.”