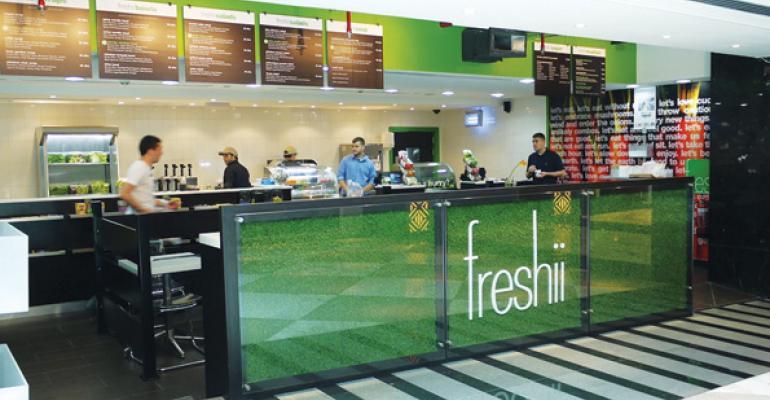 “Sales levels of these locations did not support a continued investment by both parties,” the company said.

The revelation came as Freshii said it expected to open fewer units due to scheduling and development delays, as the chain’s development outpaced its capacity to handle the expansion.

“We missed our internal expectations for the quarter,” Freshii founder and CEO Matthew Corrin said during a call with investors. “Today’s announcement is extremely disappointing to me.”

Still, he said the issues are “correctable.”

Freshii said its development team “was tasked with facilitating a far greater number” of new unit openings in 2017 than in the previous year. That stretched the team and led to unforeseen challenges.

In addition, Freshii said it began developing with more large, multi-unit franchisees in the United Kingdom, California, Florida, South Carolina and Virginia. Those operators “have been more conservative in their initial real estate selection processes than the company initially anticipated.”

Freshii said it would use only its more efficient general contractors to improve the pace of buildout, and added employees to its design group. The company has also contracted with a project management firm to oversee construction and improved relationships with real estate consultants to better site selection.

But the loss of the locations in Target stores is likely disappointing for Freshii, which earned spots inside the retailer in 2015, helping spur the chain’s rapid growth.

Seventeen of the 18 locations were closed in the company’s third quarter ended Sept. 24, and one location is expected to close in the current period. The closures “happened rapidly,” Corrin said.

The Target closures offset all of Freshii’s new unit openings in the quarter and meant the company finished the period with no net new locations.

Freshii said it has conducted an extensive review of its relationship with Target, including site selection, branding, operations and menu mix. The company plans to revise its operating model for non-traditional locations to tailor menu offerings and improve in-store labor practices. For instance, Freshii would offer menu items that require less prep work to increase labor efficiency.

“We do not believe this experience is indicative to how future nontrade partnerships will proceed,” Corrin said.

Freshii said the closures would not have a material impact on systemwide sales, but they would lower annual revenue by $120,000 to $140,000, due to losses in revenue.

The company also lowered its long-term unit guidance. The company now expects to have between 730 and 760 locations by the end of 2019, a decrease from a previous estimate of 810 to 840 units.