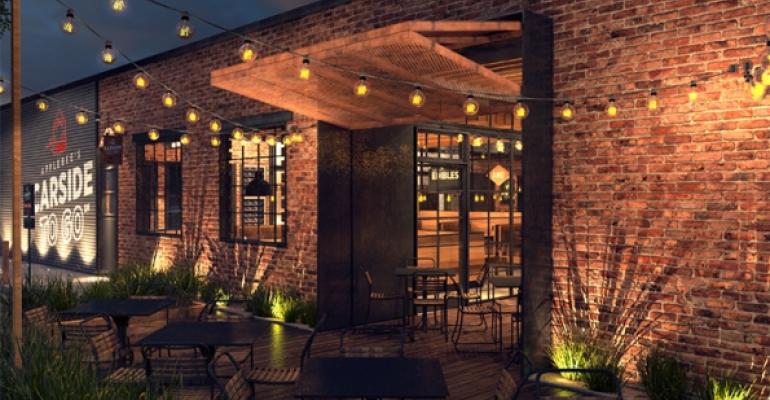 Applebee’s sets sights on turnaround in 2016

New prototype design, upgrades to bar and menu in works

Applebee’s Grill & Bar is plotting a turnaround in 2016 that will include tests of a new restaurant design, an overhaul of the bar and menu, and investments in customer-facing technology.

In an interview with Nation’s Restaurant News, Sanjiv Razdan, Applebee’s chief operating officer, outlined in broad strokes some of the ways the 2,016-unit chain will attempt to “break out of the sea of sameness” in casual dining next year.

It’s a second, recent attempt at a turnaround for Applebee’s, which was acquired eight years ago by IHOP, bringing both brands under publicly traded parent company DineEquity Inc., based in Glendale, Calif. Since the deal, DineEquity refranchised all of Applebee’s company-owned units, remodeled restaurants and reworked more than 80 percent of the menu.

In September, DineEquity consolidated some of Applebee’s support functions with IHOP at its Glendale headquarters, prompting the exit of the brand’s president, Steven Layt. Julia Stewart, DineEquity chairman and CEO, took over the role of president and pledged to “push the reset button” for Applebee’s.

Razdan, a former general manager of Pizza Hut operations in India, joined DineEquity a year ago.

The past 12 months have been a tough year for casual dining, he said. “It’s really never been tougher.”

For Applebee’s, that has meant fresh competition in the casual-dining space, changing consumer tastes, and new technologies that are increasingly playing a role in customers’ lives.

“Clearly that has created a case for an unprecedented need for change, for innovation and finding new ways of differentiating from other brands,” Razdan said. “We find consumer expectations are changing and there are more options for them to choose from. So we have to up our game, stay very focused and keep up.”

With that in mind, Applebee’s is testing a new restaurant design centered around an open kitchen. One test unit opened last week in Parkhurst,Texas, and a second is under construction in Georgia, Razdan said.

“We’re making the kitchen a big focal point, so guests can see their food being freshly prepared, feel the energy and see the chefs,” he said.

The outdoor landscaping will also be reworked with new dining and drinking areas.

Much attention will also be focused on revitalizing the bar, Razdan said.

A new training program called Bar Stars has been developed to raise the level of service, and the brand is looking at new uniforms, modern glassware and other physical changes that will likely include new fittings, electrical outlets so customers can charge their phones, flat-screen TVs, and improved music and lighting.

In addition, Applebee’s will upgrade the quality of beverages, both alcoholic and nonalcoholic, he said. Cocktails will include more handcrafted, fresh and natural ingredients with unique signature drinks like Bourbon & Berries.

The beer platform will be completely reworked to include a wider range of offerings, more “hyper local” craft beers, as well as nationally recognized craft brands and the classic labels, Razdan said.

Although DineEquity does not specify what percentage of sales currently comes from the bar, Razdan said there is opportunity for improvement. The goal is to create Applebee’s as a bar destination, rather than just a convenience.

“We want to modernize and evolve Applebee’s bar offer,” he said.

More technology in the new year

In early 2015, Applebee’s rolled out the Pub Diet, with classic bar-and-grill dishes under 750 calories, for example. That was a hit, as was the chain’s platform of All-In Burgers, made with beef patties stuffed with various premium ingredients.

The All-Day Brunch Burger, topped with bacon, onion, crispy hash browns, American cheese and a fried egg, has been one of the best product introductions ever for Applebee’s, Razdan said.

In 2016, Applebee’s will unveil an all-new menu platform that Razdan said will be a first for the casual-dining segment, but he could not give details.

“We believe it will change some of the perceptions that exist about Applebee’s,” he said. “It’s game changing. It’s new. It finds the sweet spot of what people expect from us, but in a new and different way.”

Technology will also increasingly become a part of the Applebee’s experience, Razdan said.

Over the past two years, the chain has rolled out tabletop touchscreen tablets in restaurants, allowing customers to order and pay at their convenience. The tablets have also added a layer of security for customers who increasingly don’t want their credit cards to leave their sight, he said.

Applebee’s customers can also order and pay online or via mobile app. Razdan said customers want to see use of such technologies continue to evolve.

“Guests want convenience. They want immediacy, and they want to customize,” he said. “They want to group order. The way they can stay online is important, how user friendly that might be. The ability to sign in through social media has become important.”

Razdan envisions a future scenario in which dine-in customers go online or into the mobile app to place an order at their local Applebee’s. Using geotracking, the restaurant will be alerted when they are nearby and their order will go to the kitchen.

When the customer arrives at the restaurant, they could be greeted by name and their table readied. Not long after they sit, their food arrives at the table. They can order more drinks or pay at their convenience via tablet.

In all, however, Razdan said the turnaround efforts that will begin to show up systemwide in 2016 will follow the theme of “fewer, bigger, better.”

Rather than introducing 30 to 35 new menu items, as in past years, the company will focus on making fewer changes.

“But the ones we do make will be significantly differentiated,” he said. “We’re executing fewer things, but in a bigger and better way.”