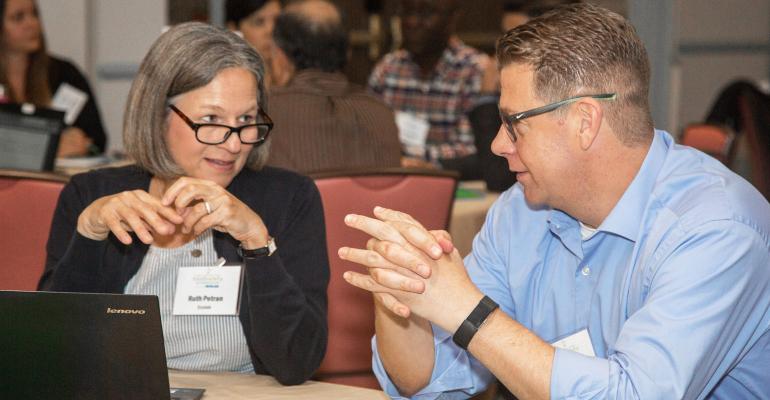 Strategies for offering safer food through chef education and contract negotiation were among the ideas offered up to attendees to the 13th annual Nation’s Restaurant News Food Safety Symposium.

The event, sponsored by Ecolab, drew nearly three dozen operators, educators, attorneys and other food safety professionals and industry experts to the Park MGM hotel in Las Vegas Sept. 16 through 18. 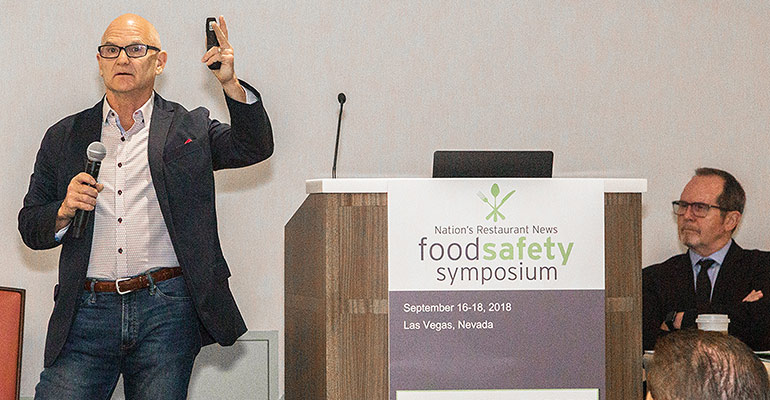 During an educational session titled “Food Trends and Their Impact on Food Safety,” Brian Nummer, Ph.D., a microbiologist, consultant and professor with the Food Safety Extension at Utah State University, offered the mnemonic FAT TOM as a reminder of the factors that contribute to bacteria growth or demise: Food, Acidity, Time, Temperature, Oxygen and Moisture. The session touched on such food trends as sous vide and other reduced-oxygen packaging food preparation techniques, charcuterie, pickling, cask-aged cocktails and the use of fresh produce in beverages.

Referring to his experience with chefs chasing emerging food trends, Nummer said that some culinarians might reject suggestions to alter a preparation process to make something safer, arguing, “That’s the way I need to do it. That’s my art.”

However, he said, if chefs are trained initially on food safety principles, they naturally will incorporate them into their cooking.

“All of a sudden, they are going to say things like, ‘I already put lemon juice in, so I’ll just keep putting lemon juice in until I get a pH 4 [bacteria-killing level of acid],” he said. “Now we’ve made a culinary guy into a scientist.” 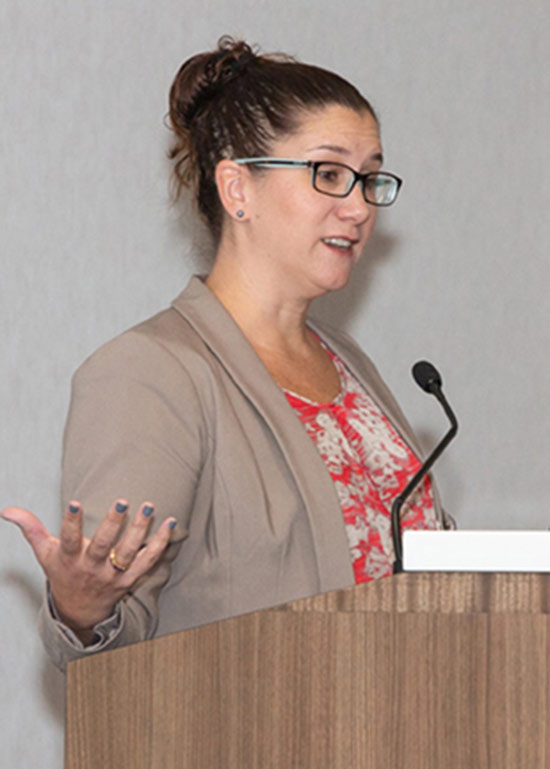 “One involves risky practices with third-party vendors; the second, things we’ve dealt with before or have a known risk exposure; [and] the third one covers complete anomalies, or things we’ve never seen before,” he said.

Related to dealing with requests to try relatively new but known-to-Marriott foods or techniques, the hotel company executive said, “Our standards take care of it and we’ll say, ‘Here is our intranet resource page, follow the standards for this particular activity.’”

For methods or techniques the company has no experience with, the company will bring in a consultant or microbiologist, Davis said. 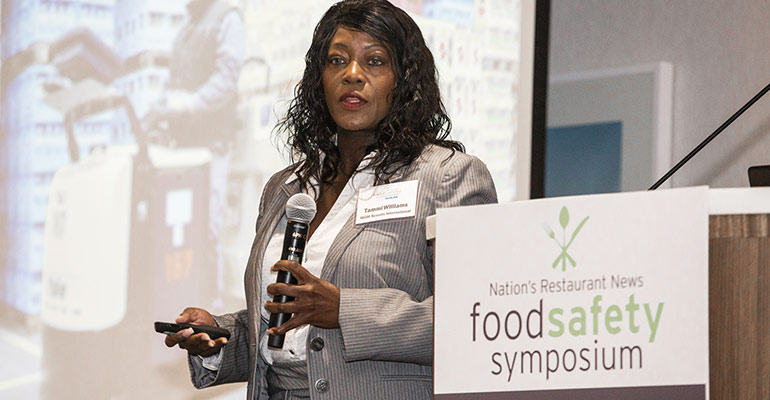 The Cheesecake Factory Inc., put off by what it considered the high price of third-party systems to aid in multistore food recalls, developed its own, according to Al Baroudi, Ph.D., the company’s vice president of safety and quality assurance. During the “Outbreaks: A Supply Chain Focus” panel, Baroudi spoke of his company’s recall system  that phones managers at restaurants to start a guided two-hour-targeted process to identify all possible in-restaurant locations for implicated goods; separate or dispose of those ingredients; complete and submit to headquarters a certificate of product destruction; and submit invoices for the cost of recalled foods to associated vendors.

The Cheesecake Factory executive added that whenever the recall system is initiated, the vendor whose product is involved is automatically sent a minimum $2,500 invoice, as per a negotiated clause in all supplier contracts. Referring to that invoice strategy, Baroudi noted, “We do it for two reasons: One, to help pay for the [recall] system, and two, as a way to get vendors to pay attention. You see a lot of reduction [in quality issues] after that.” 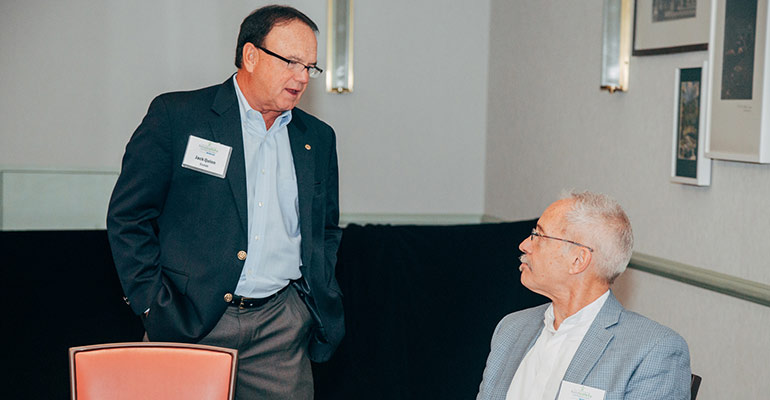 Ruth Petran, Ph.D., Ecolab’s vice president of food safety, updated attendees about the federal Food Safety Modernization Act and recapped recent studies and findings, including the results of the United States Department of Agriculture’s “2015/16 Produce Grower Food Safety Practices Survey” that looked at the size of produce growers and production practices, among other factors.

“Generally, the larger facilities [growers] — those with $5 million dollars in sales and up — were more likely to have [fundamental food safety] practices already in place,” Petran said. She noted that while water quality testing requirements for produce suppliers are now being debated in regulatory circles, many of the USDA surveyed growers “already are doing this type of testing.”

The Ecolab vice president also referred to USDA survey findings that growers who used third-party facility audits spent two to 10 times more on food safety than those that did not, with the largest producers spending at the high end of that multiple. “This is another potential criterion for you to think about as you consider who to buy produce from: Do they have an audit? Because it is likely they will put in more effort responding to an audit.”

Develop “foolproof” systems — and ensure employees use them

Maintaining standards of food safety and cleanliness is an ever-changing effort, according to the event’s keynote speaker.

“You have to bring in new products,” said Richard Ghiselli, head of the hospitality and tourism management department in the College of Health and Human Services at Purdue University in West Lafayette, Ind. “You have to bring in new suppliers. You also have new and emerging bacteria that is antibiotic resistant. We are also using technology to speed things up and help us.”

While the most common food safety violations are improper storage of toxic items and good hand-washing and hygienic practices, he said, they never fade away.

“We wrestle with that daily, even hourly,” Ghiselli said.

Companies must set standards and build them into a food safety culture, and then they must empower the employees to engage in those best practices.

“Make your systems foolproof,” Ghiselli said. “Identify the hazards and implement systems and processes to reduce those hazards.”

“It helps make sure we know our walk-ins, our freezers, our stand-alone refrigerators and our make lines are all at the proper temperature,” Ghiselli said. “We are now able to monitor that on our watch or our smartphones.”

Norovirus was the foodborne illness topic that dominated discussions at the recent Food Safety Symposium, with three-quarters of supply-chain and quality-assurance attendees identifying it as their chief concern and one quarter identifying Hepatitis A as a worry.

Norovirus is among the top five germs that cause foodborne illnesses in the United States, Ghiselli said. In his address, he said a list released earlier in 2018 by the federal Centers for Disease Control and Prevention in Atlanta identified these five germs and their common sources: