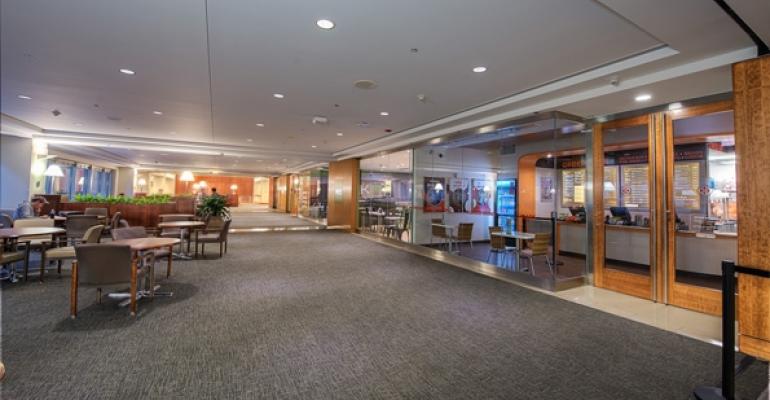 The phrase “hospital food” used to be synonymous with gelatin and mystery meat, but the competition for fast-casual and upscale restaurant brands in urban hospitals is intensifying as patients and visitors raise their expectations of the health care experience.

Northwestern Memorial Hospital in downtown Chicago completed a 70,000-square-foot dining and retail space in late November called “Shop & Dine Northwestern,” which includes local fast-casual brands with a healthful positioning like GRK Greek Kitchen, Sopraffina Marketcaffè, Protein Bar and Saigon Sisters, as well as a large Au Bon Pain. The hospital has begun leasing for the second phase of the hospital’s growth plan, including 17,000 square feet of retail space in a 1 million-square-foot, 24-story outpatient facility to be completed next fall. The Chicago-based franchisees of LYFE Kitchen have agreed to put their second unit in the development.

The hospital sought out the restaurant tenants in most cases — not the other way around — but several operators said Northwestern Memorial’s advantages of the steady deluge of foot traffic and its prime location a block away from Chicago’s “Magnificent Mile” on Michigan Avenue were instantly apparent.

“We thought it was a no-brainer,” said Matt Matros, founder and chief executive of Chicago-based Protein Bar.

The healthful-food concept opened its 10th Chicago-area unit at Northwestern Memorial and also has three locations in the District of Columbia. The experience has been so positive that Matros enthusiastically would welcome more health care foodservice opportunities.

He and his fellow operators likely will get their chance, not just at Northwestern Memorial but at other urban hospitals around the country, where administrators increasingly are treating the foodservice options as an extension of patient care and as a crucial benefit to their staffs and neighborhoods.

“The trend in restaurants is that folks are trying to cater menus to healthier, fresher options, and given that we’re in health care, it was important for us,” said Gina Weldy, vice president of real estate for Northwestern Memorial. “In the work environment we’re in now, people eat three meals a day near the office. These concepts give us the ability to offer that.”

Those objectives for the hospital align nicely with a fast-casual restaurant’s operating conditions, Matros said.

“I like that it’s a 24-hour environment,” he said. “While we’re not 24-hour, there are people [at the hospital] all the time, during [our] breakfast, lunch, dinner and snack [dayparts]. For the people working the midnight shift, their breakfast might be at 7 o’clock. It’s not just doctors and nurses, either. There are lots of support staff, biotech sales reps and pharmaceutical sales reps.”

The volume of foot traffic around the five-square-block area of the hospital is significant, not just from Michigan Avenue shoppers and hospital visitors, but also from Northwestern’s medical and law schools, as well as residents in the Streeterville neighborhood. However, until now the demand for restaurants in the immediate vicinity had been met mostly by quick-service restaurants, which gave Northwestern Memorial a chance to have differentiated food offerings, Weldy said.

“Along the Magnificent Mile, the drivers are the focus, so there are not a lot of fast-casual options, which gave us a unique opportunity to have a win-win for tourists, patients, staff and Streeterville residents,” she said. “The neighbors want a pedestrian-friendly environment, and by adding restaurant properties on the ground floor that are open into the evening hours, it’s a big plus for the neighborhood.”

Matros said he was pleasantly surprised by the amount of traffic Protein Bar has received from the tourists along Michigan Avenue and residents of neighboring Streeterville — even without a street-level façade.

“We thought that traffic would just be gravy for us because there had been a general lack of options in Streeterville,” he said. “But now in the development there are lots of choices, so if you’re working with three or four other people there’s no veto vote in the whole destination.”

Dan Rosenthal, president of Chicago’s Rosenthal Group, said the street-level locations for his two restaurants at Northwestern Memorial — an outlet of his Sopraffina Marketcaffè fast-casual chain and the full-service Cicchetti restaurant — allow patrons to walk in from the street without encountering any part of the hospital environment.

“We didn’t think there would be much of a stigma of being foodservice in a hospital; we’re foodservice at street level with a hospital on top of us,” he said. “When we saw the location, which is a block off Michigan Avenue and within three blocks of 4,000 hotel rooms, we felt it was a tremendous opportunity.”

Rosenthal owns and operates five other locations of Sopraffina, as well as Chicago restaurants Poag Mahone’s and Trattoria No. 10.

Just what the doctor ordered

Dozens of restaurant brands have identified nontraditional and on-site locations as growth areas for 2014 and beyond, and operators are expressing greater openness to health care settings when the real estate turns out to be as desirable as that offered at major urban hospitals.

Matros of Protein Bar conceded he planned to expand in Chicago, Washington, D.C., and soon Denver, primarily through opening traditional restaurants, but the experience so far at Northwestern Memorial is a welcome progression in on-site foodservice he hopes to repeat at other hospitals, college campuses, stadiums or airports when the right opportunity arises.

“This is sort of the next generation of nontraditional restaurants,” he said. “Everyone is stepping up their game because they realize they’re no different from restaurants in that they’re in the hospitality business. That’s no different in airports or stadiums.”

Another health care location “isn’t our No. 1 priority, but we’d gladly welcome it,” he added. “In D.C., we’d love to go to [the] Foggy Bottom [neighborhood] by getting into George Washington University’s hospital system.”

While Rosenthal is not necessarily looking for more hospital restaurant opportunities for his group, he also thinks the project at Northwestern Memorial is the sign of a wider move to set a new standard of foodservice in hospitals.

“I’m sure there will be dozens of followers of this model to provide increased service and amenities to staff and visitors in this setting,” he said. “That’s terrific.”

Well-dressed shoppers have been filling tables at his Cicchetti restaurant — an upscale-casual spot built around wine and Italian small plates — next to doctors dressed in scrubs and people visiting their loved ones in the hospital above, he said.

“For the first time in a hospital dining experience, a visitor to a patient can come into a restaurant to relax for a few minutes with a glass of wine and get transported away from the reasons why they’ve been brought to the institution,” Rosenthal said. “Or maybe they’ll come in to celebrate that newborn up in the labor and delivery wing.”