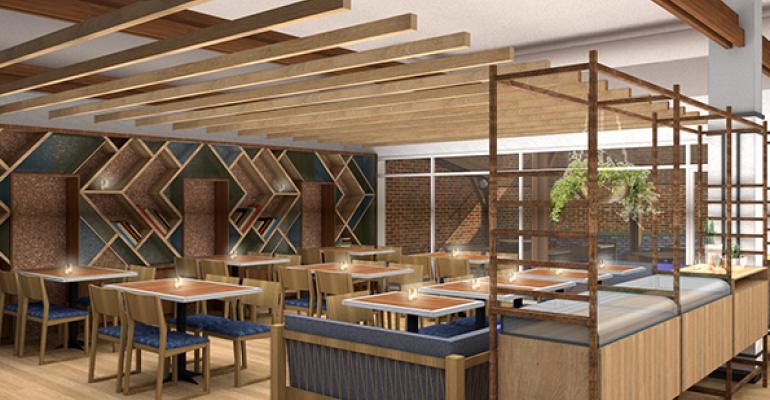 Executives of the New York-based bookseller told an investor conference Thursday that the first of four expanded cafés would open at the Vernon Hills Shopping Center in Eastchester, N.Y., in October. The other three are planned for the Edina Galleria in Edina, Minn.; the One Loudon mixed-use community in Loudon, Va.; and the Palladio at Broadstone Mall in Folsom, Calif.

“Our new cafés will feature a contemporary aesthetic, an expanded food and beverage offering — including wine and beer — and a major commitment to hospitality, featuring tableside service,” said Jaime Carey, who Barnes & Noble last week promoted to president of its newly created restaurant group, from his prior position of chief operating officer.

Carey said the new cafés would be larger than current foodservice areas, and thus would likely contribute to a larger share of sales in those bookstores. Existing café areas provide about 10 percent of overall sales for the stores in which they are located, he added.

“The new food and beverage offerings along with a focus on hospitality will further reinforce Barnes & Noble as a destination and a place where people come to spend time and unwind,” Carey said. “Where possible, we will also look for opportunities to introduce some of these new offerings within our existing cafés.”

Ron Boire, Barnes & Noble CEO, said the company has 588 restaurants today, and the expanded cafés would harmonize with the company’s existing competences.

“We know how to keep them clean,” Boire said. “We know how to get product to them. It's really about the creativity around the new menu and a new experience. We're really excited about it.”

Boire added that the cafés would improve on the store experience and position the bookstores in the community.

“And obviously, the café side is also not just a margin play, but it's a frequency play,” Boire said.

The bookseller is also tapping into the growing trend of brick-and-mortar retailers, facing increased competition from online sales, who are enhancing the customer experience.

Barnes & Noble has already expanded beyond books into such areas as gift items, toys and vinyl records.

Carey said if the four test restaurants do well, the concept could be expanded or parts of it could be incorporated into existing stores that have space for a larger eating area.

“One of the greatest contributors to our success has been our real estate portfolio,” Carey said in the investor-day presentation. “And Barnes & Noble has some of the best real estate locations across America.”

He said the new stores will serve as community spaces for customers.

“They will have increased customer seating areas to create a warm and welcoming ambience that only further reinforces the community center aspect of Barnes & Noble,” he said. “The new stores will also feature a new mobile experience for both booksellers and customers that will improve the customer experience through a mobile app that will provide customers a digital layout of the store and enable them to locate books in their store.”

Barnes & Noble first introduced in-store cafés in the early 1990s. For the latest iteration, the company partnered with the Branstetter Group and AvroKO on the menu and design.

Boire noted that the company is calling the fare “American café-style food.”

“Imagine the book club experience with a glass of wine and some fine, shareable food in the café,” Boire said. “So quality is certainly markedly different in terms of the full-day menu without losing the great coffee experience in the morning. In fact, I think even enhancing it.”

The first café, in Eastchester, N.Y., will also include outdoor seating with a fire pit and a bocce court.