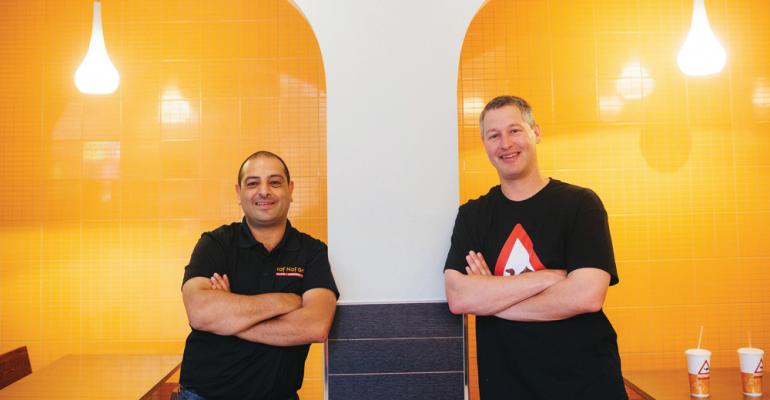 The search for the next big fast-casual brand has everybody looking for the proverbial diamond in the rough.

In that sense, David Sloan and Sahar Sander, co-CEOs of Naf Naf Grill, have found a promising growth vehicle in a pretty rough setting.

Sander and Elan Burger, now vice president of facilities, opened the forerunner to Naf Naf Grill in 2008, in suburban Naperville, Ill., in a worn-down, 1,200-square-foot building that formerly housed a Taco Bell restaurant, with the purple exterior intact. The air conditioning didn’t work. But the Middle Eastern menu of housemade pitas, shawarma and falafel drew crowds of devoted fans, including Sloan.

Sloan recruited Justin Halpenny, now senior vice president of development, to join the trio in relaunching the brand as Naf Naf Grill. They grew methodically and contiguously, first to downtown Chicago, then Minneapolis and Madison, Wis.

“We had the ability to keep it fresh and not take shortcuts,” Sloan said during NRN’s MUFSO conference in October, when Naf Naf Grill was recognized as a Hot Concepts Award winner.

While its menu has no room for shortcuts, Naf Naf Grill’s growth trajectory was put on the fast track in 2015, when private-equity firm Roark Capital Group made a significant investment, its first in an emerging growth chain rather than an established brand.

“They’ve been unbelievable partners,” Sloan said. “They’ve provided so much support and knowledge.”

With Roark’s help — plus capital from friends, family and wealthy customers that continues to come in — Naf Naf Grill looked to end 2016 with 29 locations and grow by another 15 units in 2017.