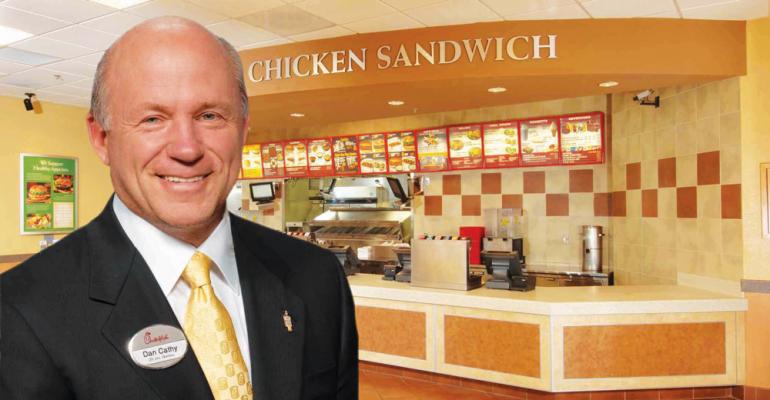 When Dan Cathy, chairman and CEO of Chick-fil-A Inc., interacts with customers of the quick-service chicken chain he leads, he has a simple way of introducing himself: “Hi. I’m Dan. I work in customer service.”

Since 2013, when Cathy took the top role at the nearly 2,000-unit chain beloved for its fried chicken sandwiches, he’s helped the 70-year-old brand evolve and grow while always keeping the customer top of mind.

In the past year, Chick-fil-A has leveraged technology to deliver on customer needs, with the debut of the Chick-fil-A One app, which marries mobile ordering and payment with loyalty.

Technology is also helping Chick-fil-A maintain its signature “extra mile” of service as it expands to demanding markets like New York City. Workers at the chain’s Big Apple locations bust big lines that snake out the door by taking orders on the fly with iPads, which not only reduces wait times, but lets the chain serve more customers.

Chick-fil-A is also known for the devotion — some might say obsession — fans have to the brand. Customers camp out ahead of new restaurant openings for a chance to win a year of free meals, and on “Cow Appreciation Day,” some don cow costumes in honor of the chain’s mascot to win free chicken sandwiches.

The customer-centric approach appears to be paying off. According to NRN’s 2016 Top 100 ranking, the chain, which had 1,967 units and $6.7 billion in sales, was the fifth fastest-growing chain with 18.1 percent year-over-year sales growth. Chick-fil-A also regularly ranks highly in NRN’s annual Consumer Picks report. In 2016, it received top marks among chicken chains for service, reputation and craveability, and had the fifth-highest overall score among all 111 limited-service chains.

None of this likely comes as a surprise to Cathy, who said last year that “the company’s secret sauce is its people, and their ability to operate with consistent excellence.”