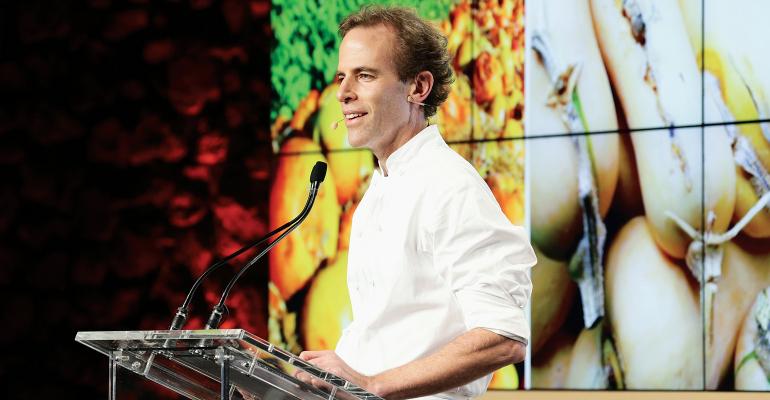 If you want to know what moral imperatives chefs will be advocating in a few years, look at what Dan Barber’s doing today.

The chef-owner of Blue Hill in New York City and operator of Blue Hill at Stone Barns in Pocantico Hills, N.Y., has spent most of his career connecting people to their food and starting a national dialogue on food issues.

In 2006, before “farm-to-table” was a ubiquitous and overused phrase, Barber was already bringing farmers themselves to the table: He brought the man who grew his turnips to a charity fundraiser at which most chefs were previewing their most soignée springtime dishes. Barber just served the turnips, picked that morning, stems still on, peeled and sprinkled with salt.

Barber was already doing whole animal butchery back in 2007. In the words of former New York Times restaurant critic Frank Bruni, he wanted you so connected to the land that he “would have you eating next to your lamb chop’s mother, deep in a patch of the very herbs seasoning the chop, if he could.”

That same year, Barber was ahead of his time in another way: He was already providing health insurance for his staff, years before other restaurants began to follow suit.

More recently, this spiritual godfather for chefs has brought food waste into the spotlight. In 2015, he turned Blue Hill into WastED, where he highlighted ways for food otherwise thought of as garbage to be made edible. He and his cooks used stale bread, fish bones and the fibrous leavings of vegetable juicers to make food that sold for $15 a plate.

The following year, food waste was the talk of restaurants across the country.

Where Barber goes, others follow, making him a true tastemaker.