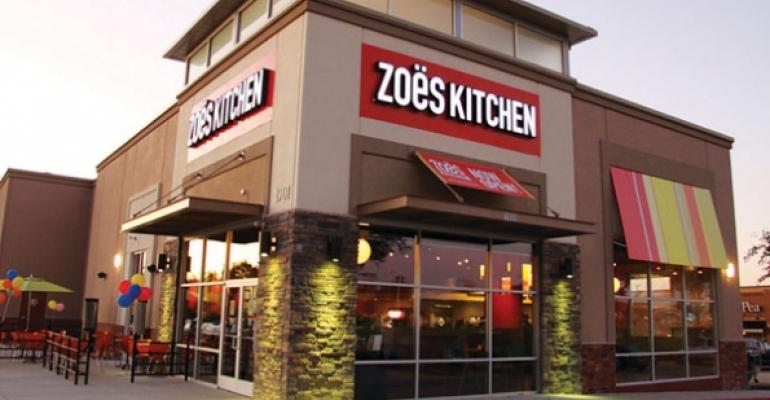 Zoës Kitchen differentiates itself from the competition not by focusing on the traditions of a single country or region, but by embracing the cuisines of the entire Mediterranean, said Kevin Miles, president and chief executive at the Birmingham, Ala.-based brand.

That broad culinary base together with one or two additions from the South — think pimiento cheese and slaw alongside feta and orzo — and a fun dining experience is expected to help propel the fast-casual concept from its current 75 restaurants to more than 100 locations by the end of 2013.

“And we do have a quirky little favorite in the pimiento cheese,” he added.

Zoës was founded by Zoë Cassimus in 1995. Zoë means “life” in Greek, Miles said, and the restaurant was named after her because she loves “celebrating a good time and being with family and friends.” Zoë also focused on using only fresh ingredients — a practice still followed today, he said.

“I think Zoës is unique,” Miles said. “Nobody else is really bringing Mediterranean mainstream.”

It’s not just the focus on fresh ingredients and a fun atmosphere, but also the health halo surrounding Mediterranean foods that could boost Zoës’ sales in years to come, said Nancy Kruse, restaurant expert, Nation’s Restaurant News columnist and president of The Kruse Company in Atlanta.

“It’s a trend that will have pretty long legs,” Kruse said. “It has taken Americans some time to discover foods from Greece and the eastern Mediterranean, which have long been overshadowed by Italian cuisine. I believe their time has come.”

Mediterranean fare features some flavors that are unfamiliar but also approachable to the American palate, Kruse said.

“It combines the Mediterranean mystique with tasty, consumer-friendly foods that are still relatively undiscovered,” she said.

Miles said the average Zoës customer is between the ages of 25 and 50, and the metric skews female. Customers often purchase several meals at once, bringing the average check to above $14.

“What really makes us different is [we’re in] the right space in the industry,” Miles said. “I think the consumer has really found that fast casual is the way to eat, and we’re growing.”

Within the next year, Zoës will expand into Oklahoma and the Philadelphia metro area. The focus for growth is the region from Dallas to Philadelphia, in addition to the Sun Belt states, he said.

Although the company has grown through franchising in the past, all 2013 openings will be company owned, Miles said. Only eight of Zoës current locations, in fact, are franchised.

“In this critical growth stage we believe it is in the brand’s best interest to control all variables,” he said. “We’re moving quickly, and to do so, company growth makes sense for us right now.”

“We’ll never close the door on franchising; it’s just not our focus right now,” he added.

Zoës Kitchen has been privately held by Los Angeles-based Brentwood Associates since 2007.