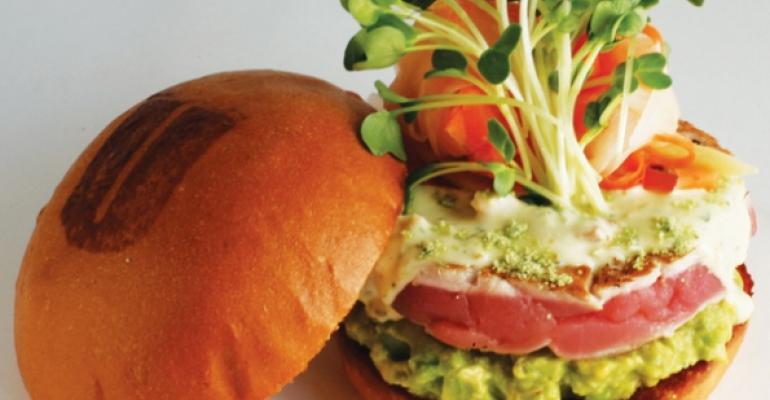 People argue about the reality of umami, the supposed “fifth taste” discernible to the palate but not easily described by the brain.

Founder Adam Fleischman would likely add “expandable” to that list, as well.

“This is a fast-casual concept we want to bring to other [U.S.] culinary centers,” said Fleischman. Such cities, he added, are established restaurant-loving communities “where people can tolerate a $20 check” for a premium burger, side and drink.

Were Darren Tristano a gambling man, he’d place Umami’s unit number ceiling at about 150, “and those would be in affluent markets that appreciate that kind of burger and are willing to pay for it,” said the executive vice president of Chicago-based Technomic. “It’s never going to grow to 1,000 units like Five Guys.”

But not just because of its higher-than-average ticket price, Tristano said. It comes down to the positioning of Umami’s highly flavorful and unusually topped hamburgers.

“Their burgers aren’t to be customized by customers, which in this culture flies in the face of people who are used to having it their way,” Tristano said. “It’s kind of the ‘Burger Nazi’ approach; they have the confidence to say, ‘This is the way we serve it. It’s not to be changed.’ And there are plenty of people who want that experience.”

Umami burgers include unusual toppings of truffle glaze, shiitake mushrooms and port-caramelized onions. Some are constructed from mushroom and edamame patties, and others are lashed with a garlic and puréed hog-brain aïoli dubbed “brainaise.”

Unusual to be sure, but intentional and on trend, Fleischman said.

“High-end burgers are just getting started, and there are so many areas that don’t have them yet,” he said. “With obvious economic forces at work, some people would rather spend $15 on a great burger than $50 on a steak.”

Umami sites average around 2,000 square feet and seat about 75. That makes it easy to find good locations for the concept.

“And we’ve chosen spaces we could get good deals on,” said Fleischman, who described Umami as “fine-dining fast food.” “I do think it can translate to bigger spaces, though, because we’ve got locations that do huge numbers.”

The business has grown with next to no marketing expenses, he said, crediting word-of-mouth buzz for the excitement around the concept.

“What’s sort of our strategy is to get people to take a chance and try something,” he said. “People do that and they say, ‘I didn’t think I’d like it, but I tried it and it was great.’ So you get people trusting their friends and relatives that this is good.”

While Fleischman wouldn’t share sales figures, he said 2012 revenue was double that of 2011. With nearly a half dozen stores in the pipeline for 2013, that number should grow nicely again.

He expects a one-unit spin-off concept, currently named U-Mini, to do well in the near term. It features burgers about half the size and price of those at Umami, but he said they’re just as flavorful as their more substantial forerunners.

“They’re smaller, but they’re still sizeable burgers,” said Fleischman, who has partnerships in two other emerging concepts, 800 Degrees and Red Medicine. “The menu’s simpler, too. I think it’s got great potential.”