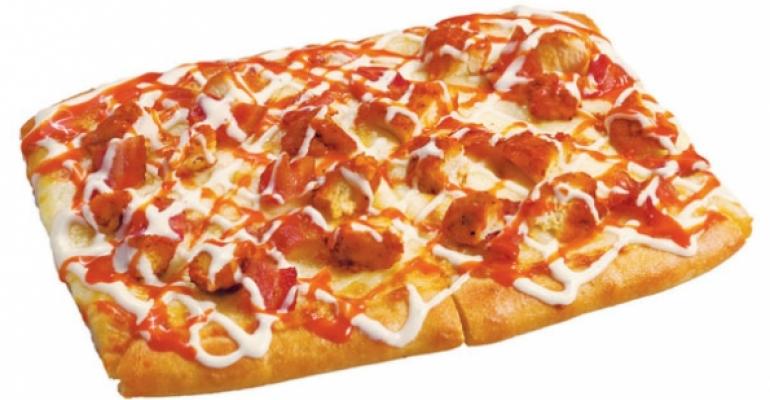 Best known among its growing fanbase for menu items that founder and chief executive Scott Gittrich calls “weird,” Toppers Pizza is using its irreverent, underdog attitude and eclectic pizzas to steal share from the industry giants.

When he opened the first Toppers store in 1991, Gittrich said he was filling a void in quality and innovation that he saw in the pizza segment.

“At that point the pizza chains that were anybody were these fast-food concepts with extremely simple menus,” he said. “The niche that I saw was a need for a fun menu of higher-quality products.”

Today that menu includes such off-the-wall pizza selections as the Potato Topper, with potato chunks, bacon and onions, and sour cream on the side; Hangover Helper, featuring Canadian bacon, onions, green peppers and potatoes; and Mac ‘N Cheese, topped with creamy cheese sauce and macaroni noodles. All Toppers pizza dough is made fresh from scratch every day in the stores.

The opportunity for customers to sample novel toppings through a familiar medium is helping to propel its popularity, according to Maeve Webster, a director at Datassential.

“The most successful operators that innovate for a mass audience do so within the familiar,” she said. “What Toppers does is take familiar toppings that are completely unique to pizzas and add them to the format. So in many cases consumers are not only getting a new pizza to experience, but a new way to experience, for example, macaroni and cheese.”

Another key differentiator for Toppers is the lighthearted, playful approach the brand takes to its communications with consumers, including everything from advertising to in-store touchpoints.

“Every interaction we have with customers is kind of fun and trying to make them smile,” Toppers director of marketing Scott Iversen said. “We try to make it a more engaging experience than what the big guys do [and] not take ourselves too seriously.”

And while the big-four concepts — Domino’s Pizza, Pizza Hut, Papa John’s and Little Caesars — still dominate the pizza space in terms of market penetration and sales, Toppers’ ability to connect with its guests on a personal level and its quality perception are driving  rapid growth. The chain has nearly doubled in size to 49 locations over the past year and a half. Iversen said Toppers is on track to have another 20 to 25 units open by the end of the year.

Gittrich compared Toppers’ success story to that of the better-burger chains, saying Toppers’ differentiated experience is driving expansion and brand loyalty in a segment known for being deal-oriented. That, according to Gittrich, is what makes the pizza giants vulnerable.

“The consumer is not loyal to cheap,” he said. “They’re perfectly willing to fire Pizza Hut and try Toppers, and we’re finding that’s what we’re doing. We’re not necessarily growing the pizza segment itself, but we’re stealing market share.”

Webster of Datassential agreed, noting consumers are still willing to pay more for a product that they see as having enhanced value, even if they seem to be cutting back on their restaurant visits overall.

“It doesn’t matter that the prices are higher [if] operators have created a greater value proposition for consumers,” she said. “Fresher ingredients, higher quality — or perceived quality — all help to drive prices up in a way that makes consumers believe they are getting more for their money.”

In the end, though, Toppers executives said it’s the right combination of fun, flavor and heart — both at the corporate and the unit levels — that has fueled the company’s performance over the past few years.

“There are a lot of people invested … heart, mind and soul,” Gittrich said.